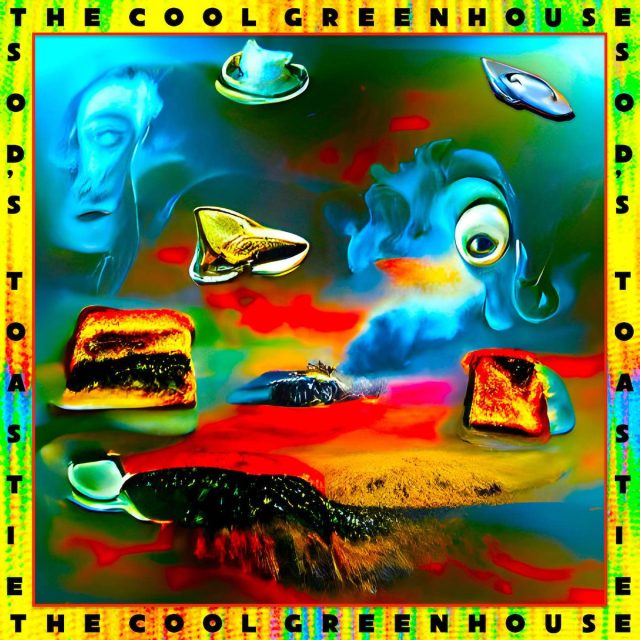 THE EDITED PRESS RELEASE: “With Sod’s Toastie, Tom Greenhouse and his intrepid band of sonic explorers in The Cool Greenhouse are more assured and confident than ever throughout this sublime sophomore album.

While frontman Greenhouse’s off-kilter observations and bizarro anecdotes remain front and centre, this time round the band up their game with a more vigorous sound that keeps pace with his wholly distinctive lyrical style. Greenhouse continues to revel in telling increasingly surreal short stories, rejoicing in the power of the deadpan one-liner and bedecking his songs with far-flung cultural references. But now the band employ a variety of techniques with improved production, from the impulsively bashed keyboards and jubilantly repetitive guitar stabs that have be-come their trademark, to flirtations with — heaven forbid! — melody, chord progressions and arrangements which elevate their tried-and-tested blueprint into a more exciting and cohesive whole.

Opener Musicians is the perfect embodiment of this conscious development. Here, Greenhouse recounts a sarcastic tale of half-truths that see him galavanting around town trying to put a band together. Sonically, it begins with a caustic callback to the group’s first EP Crap Cardboard Pet and its über-minimalist aesthetic. But by the end of the song a joyous festival of Afrobeat-inspired instruments including samba whistles, bongos and saxophones are added to the mix as the frontman, ironically, fails in his mission to recruit more players.

With Get Unjaded, the band have somehow conjured something close to pop, without abandoning the repetition and wit that’s relished by their early fans. I Lost My Head also adopts a jangle-pop sheen with a luscious synth melody, as the frontman ditches the spoken-word for a surly croon (his first known attempt at actual singing!) that provides a welcome breather from the onslaught of dense recantations that are the band’s bread and butter.

While the lyrics are still often humorous and political, Greenhouse has also notably expanded his interests to include a new host of topics. The influence of extraterrestrials, for ex-ample, infiltrates the subject matter frequently. On The UFOs, the mysterious protagonist Blinkus Booth’s isolationist lifestyle is apparently interrupted by the spectres of otherworldly visitors, while closer The Neoprene Ravine feels like an extract from a deep-space rock opera. Here, jaunty and angular instruments pile on as we are fed images of an interstellar Spinal Tap, the titular fictional band The Neoprene Ravine, who are “the alien equivalent of The Velvet Underground” and include an alien Lou Reed yelping “too busy sucking on my little green ding dong!”

Meanwhile, Hard Rock Potato is propelled by a vortex of keys and synths, a real noise-pop gem comprised of real guitar chords (!) and rock-orientated riffs. Here the stream-of-consciousness lyrics take shots at the sinister financial industry, and include one of the top-tier one-liners on the album: “It’s not gambling if you’re wearing a tie (even if you’ve got no trousers on).”

On Sod’s Toastie, The Cool Greenhouse have pushed their distinctive flavour of post-punk to the point of perfection — their incongruous riffs, alchemical instrumental chemistry, and irreverent spoken-word vocals are a delight throughout. Sod’s Toastie is hilarious at times, and at others just hilariously good — a not-so-difficult second album.”