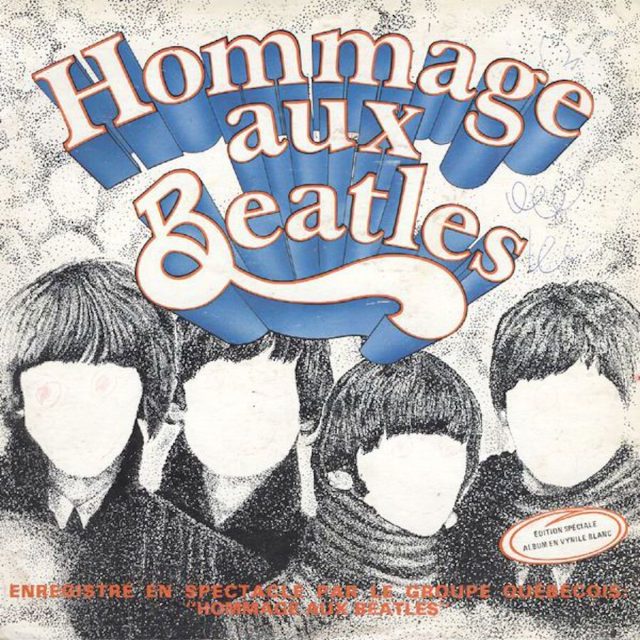 As a semi-serious Beatles collector, I like adding to my stockpile of vinyl with albums by tribute acts. Found a curious Canadian one from 1977 recently — on white vinyl!

It’s by and called Hommage Aux Beatles, and as you’d expect comes from Montreal. In fact, the person behind the “as seen on TV!” project was none other than the late Andre Angelil, the husband of Celine Dion. Angelil himself had sung translated versions of Beatles songs in the mid-’60s with his band Les Baronets. He gave that up in the early ’70s and became a promoter and manager.

Unlike the real Beatles, Hommage Aux Beatles (which translates as Tribute To The Beatles) were a fab six. The band was André Barrière and Mathieu Coletta on guitars; Billy Pajonas on keys, guitar and bass; Réal Gaboriau vocals; Michel Beauchamp on drums; and John Christman on bass & vocals. So — George, George, Paul, John, Ringo and Paul.

Who were these guys? Barriere was a prog musician who was in a band originally called Incubus, who later changed their name to Excubus. Coletta seems to have only ever been on this album — it’s his only Discogs entry. But I did find him on Reverbnation. He plays in bands in and around Montreal, namely Le Big Bang. His bio still mentions Hommage Aux Beatles. Pajonas hails from upstate New York and played bass for a while in a garage/pop band called Mike & The Ravens. Like Coletta, vocalist Gaboriau’s only Discogs entry is for Hommage Aux Beatles. Drummer Beauchamp has only one other entry, as the drummer on the B-side of a 1985 pop single by Quebec musician Paul Dean. Like Barriere, Christman has dabbled in prog rock.

Despite being from Quebec and having a French name, they perform in English. They through 16 Beatles tracks — all Lennon-McCartney originals except for three covers: Slow Down, Roll Over Beethoven and Kansas City. The songs cover the entire catalog, but apart from the title track to Sgt. Pepper’s Lonely Hearts Club Band, they steer clear of the more experimental-era stuff. Two songs from 1963, four from ’64, five from ’65, just one from 1967, three from ’68 and one from 1970 — Get Back. There are no selections from Please Please Me, Revolver, Magical Mystery Tour or Abbey Road. The most unusual song choice, apart from the covers, is probably Revolution — one of three from The White Album. The others are Back In The USSR and Birthday.

Along with punk and disco, the late ’70s also saw a resurgence in interest in The Beatles. One example was the popular Broadway musical Beatlemania, which did slightly more than 1,000 shows between May 1977 and October 1979. There was even an album and movie — which led to a lawsuit by Apple. In addition, there were several Beatles releases like the double LP Love Songs, Rarities, Live! at the Star-Club in Hamburg, Germany, 1962 and At The Hollywood Bowl. Not to mention the spoof The Rutles, created by Eric Idle for his Rutland Weekend Television. The Rutles had a pair of albums and a film. Within a few years Lennon would be dead and Stars On 45 would be on top of the charts.

So, what does the Hommage album sound like? It’s a live album for starters — or mostly live, maybe somewhat live. It has minimal, French stage patter and was recorded by Guy Charbonneau of Le Mobile Filtroson Ltée, which boasted a 16-track mobile recording unit — and by the fall of 1977, a 24-track one as well.

Hommage Aux Beatles sound like a very good cover band, particularly if this is indeed live. The songs are pretty true to the original arrangements, rather than giving them a more modern or disco feel. They even disclose on the back of the jacket the exact instruments used. Slow Down is particularly good. Makes me think there probably were a few kids who got this album for Xmas or a birthday from their parents, grandparents, aunts or uncles who thought they were getting a great deal on a Beatles album WITH ALL THE BEST SONGS.

Truth is, the kids may not have been entirely unhappy with this. I’m certainly not — I quite like it. Not for what it was supposed to be, but for what it remains. 3/5 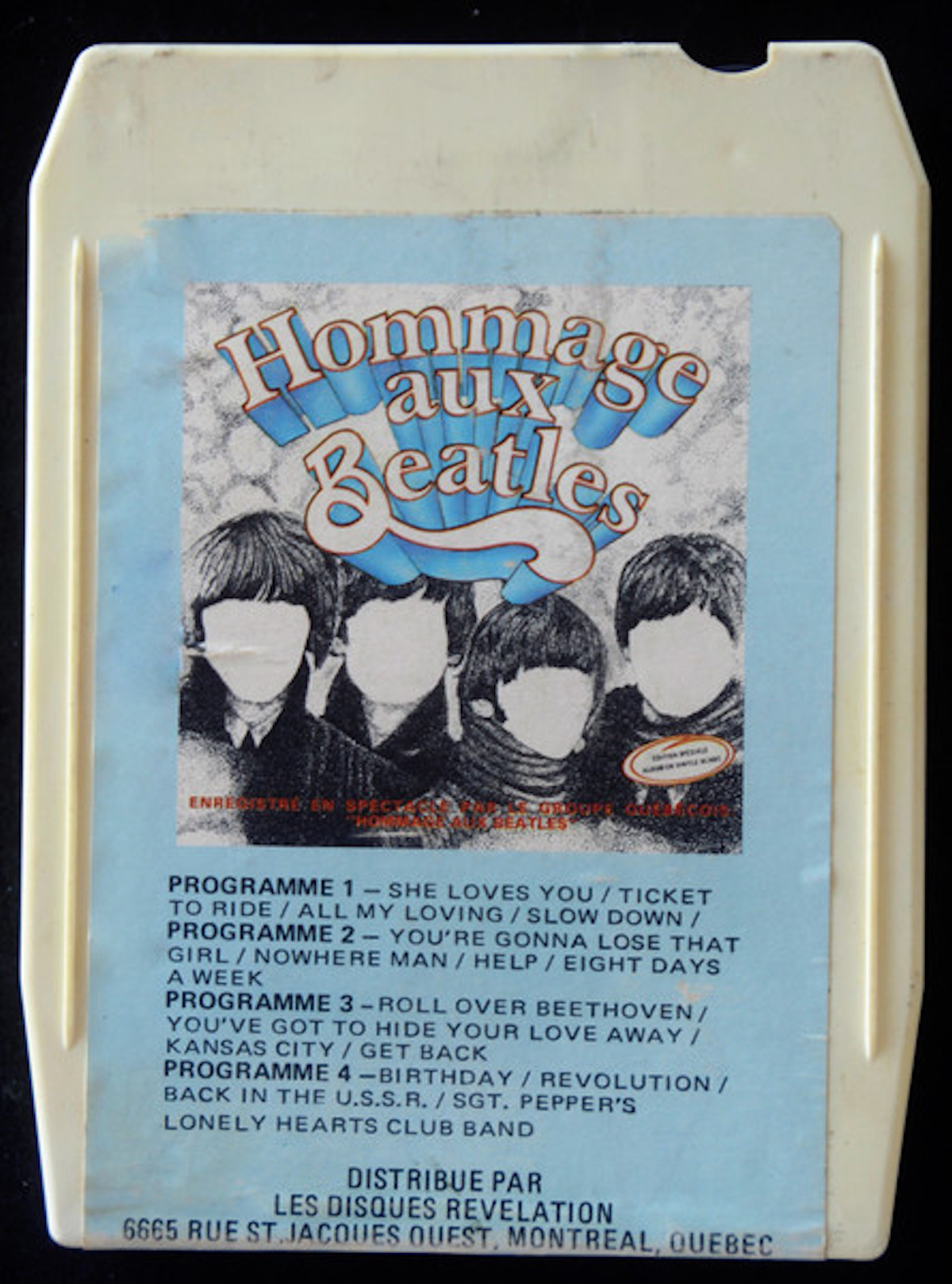