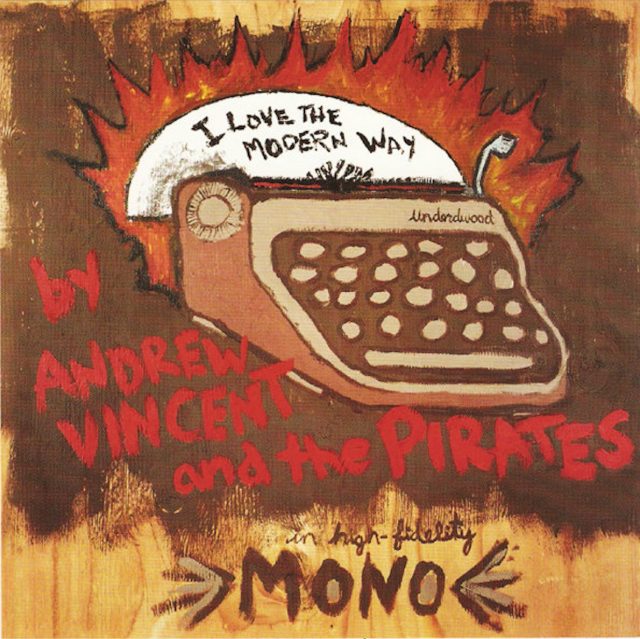 There are several Ottawa albums which rank among my all-time favourites, up there with classics — Somewhere We Will Find Our Place by Jim Bryson, Volume vs Voice by Chris Page, and Just Buy It by Furnaceface, to name a few. These albums and artists should be famous. I’m going to highlight another — I Love The Modern Way by Andrew Vincent & The Pirates is a perfect record.

It was created in Ottawa at Dave Draves‘ Little Bullhorn studio, a place just outside of Ottawa’s Chinatown which has given birth to many incredible albums by artists including Julie Doiron, Kathleen Edwards, Giant Sand, Skydiggers and Wooden Stars. Released the day before April Fools Day, 2003, in glorious mono, I Love The Modern Way may be the most-Ottawa album of all Ottawa albums. It name-checks things and places like the former Oldies 1310 station, Somerset Street and Bronson Avenue, and even Hwy 5 north of Gatineau. Every song is a banger. Every song has been on a playlist of mine. There are two releases of the album — the original 2003 CD and a limited-edition vinyl pressing of 107 records. When I bought mine two years ago, John at The Record Centre said he thought it was the last one in the city.

It begins with Martha, which is a few feet into punk rock territory. Right away it sets the tone for the album — fun and unpretentious observations by Vincent of the day-to-day world around him. He’s relatable, endearing and cool:

“Monday I’m watching TV. Watching a little Oprah Winfrey.
She’s telling me what kind of books to read
She’s telling me how words can make her weep
And she says hey boy — real men cry
and I said hey baby I’ve been crying all my life
I’ve got Martha, you’ve got Mary Jane
So I guess we got nothin’ to complain about.”

Good Time is next, a more radio-friendly number — all about preparations made for a date night. He took the dogs out, returned his empties and caught a bunch of mice. “I really know how to set a scene.” One, Two, Three is peak Vincent narrative. The lyrics are clever — sort of like Fixin To Die by Country Joe & the Fish or All Together Now by The Beatles:

“It was already 8, 9
I thought there’s no better place to spend a little time,
Than in the back seat of a Cavalier,
But when your pops came-a-knockin’ I didn’t hear.”

Cover It Up has been my favourite on the album several times. It’s an endearing impoverished musician’s rockin’ love song. The narrative plot has Vincent describing all the things in his life which need to be covered up — like his rusty car, while also telling bis girlfriend that she has no such need. Jonathan is a bit Eat Your Paisley-sounding, but crossed with Joe Jackson if he lived in downtown Ottawa.

I Love The is a short instrumental segue, which one could imagine might be an indeal start to an encore. This is followed by my other favourite on the album — Straight Outta Hoboken. Of all the ones on Vincent’s Bandcamp page, this is the one which really, really should have the incredible lyrics available. It name drops Winona Ryder, Macaulay Culkin, Christopher Walken and Ethan Hawke. It features, I believe, the album’s only guitar solo. A ridiculous thing, perfect in its reckless randomness.

Stephanie Says is next, not the Velvet Undergound song, though not without some definite influence from said band. Particularly the later stuff like Temptation Inside Your Heart. The penultimate track is Little Bit, the closest thing to a ballad. But, the heartfelt bit isn’t much more than an intro, with the usual rock banger kicking in by around 1:30. It has this excellent line:

“I need a breather from this fever
I got growing pains, I feel like Mike Seever.”

The last track is Bahamas, a frigging masterpiece of the slacker pop/punk genre. It has everything — great hooks, a danceable beat, edge, and more wonderful lyrics. Behold:

“But you say you wanna meet the Dalai Lama
Or be a dancer and tour with Madonna
Have a daughter gonna name her Pochahontas
Because you need another hero in your family
Well, alright!
And you say you wanna act in daytime dramas
Or be a lawyer and swim with those Piranhas
So whatever the case you’re gonna move to Tora’nah
‘Cuz that’s where the actors live.”

If you love rock ’n’ roll, with original, unpretentious lyrics — funny but not stupid — that holds up to repeated (even obsessive) listening, you need this album. It will make you want to jam. 5/5