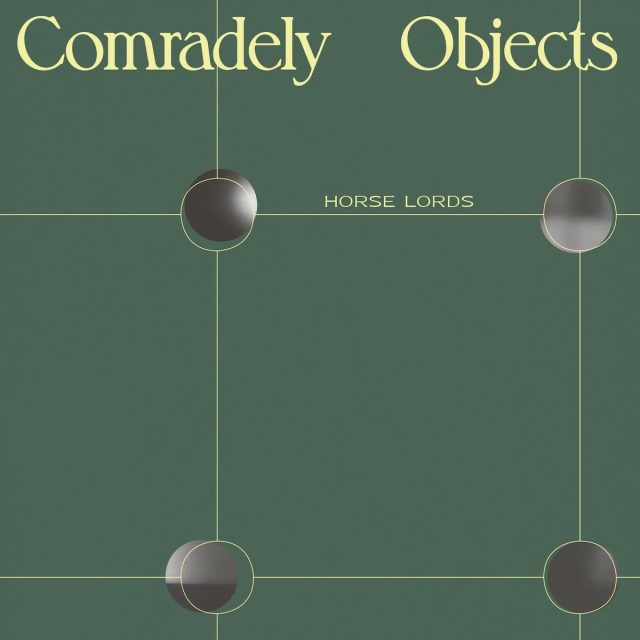 THE EDITED PRESS RELEASE: “Horse Lords return with Comradely Objects, an alloy of erudite influences and approaches given frenetic gravity in pursuit of a united musical and political vision. The band’s fifth album doesn’t document a new utopia, so much as limn a thrilling portrait of revolution underway.

This transformation came, in part, due to circumstance. Sidelined from touring their early 2020 album The Common Task in a world turned upside down, Horse Lords promptly returned to their Baltimore practice space and began piecing together the music that became Comradely Objects (Bernstein, Eilbacher, and Gardner have since relocated to Germany). Removed from their tried and true method of refining new music on the road, the quartet invested less energy ensuring live playability and more rehearsing and recording. The deliberate writing and tracking process, a rarity since the band’s earliest days, led to a collection of pieces that signal a new peak of creativity and musical heft without devolving into studio sprawl or frippery.

Comradely Objects reflects familiar elements of Horse Lords’ established palette — the mantra-like repetition of minimalism and global traditional musics, complex counterpoint, the subtleties of microtonality, a breadth of timbres and textures drawn from all across the avant-garde — with some standout stylistic innovations. At different moments, the album veers closer to free jazz than anything else in the band’s catalog, channels spectral electroacoustic tones, and throbs with unexpected yet felicitous synth. While these new elements are evidence of additional studio time and care, Comradely Objects retains the dizzying obsessive rhythmic energy that galvanizes the best moments of the band.

It’s vital that the Horse Lords’ instrumentals speak for themselves, and for the quartet’s shared musical and sociopolitical vision. The title derives from Imagine No Possessions, art historian Christina Kaier’s 2008 book on Russian Constructivist design. Constructivists shunned the artistic egoism and precious artifacts of capitalist art in favor of utilitarian objects for the masses. “The comradely object should promote collective, egalitarian ideals,” the band notes. “They tended toward simple, unadorned forms that emphasized utility and foregrounded the material. Comradely Objects works through what this means for the material of sound, for music, for the album, and for artistic production in the 21st century.”

Not only does Comradely Objects redefine the possibilities for Horse Lords’ shopworn format, it adds a new contour of confidence and finesse to the band’s reliefs mounted in both sticker-spattered indie hovels and the white-walled world of composition. It also solidifies their position among the foremost smugglers of radical musical and political ideas into contemporary music that happens to also, after a fashion, rock. Comradely Objects presents the most sublime document yet of the band’s ongoing interrogation of aesthetic and social form, purpose, and intent, alongside note, beat, and raw sound.”