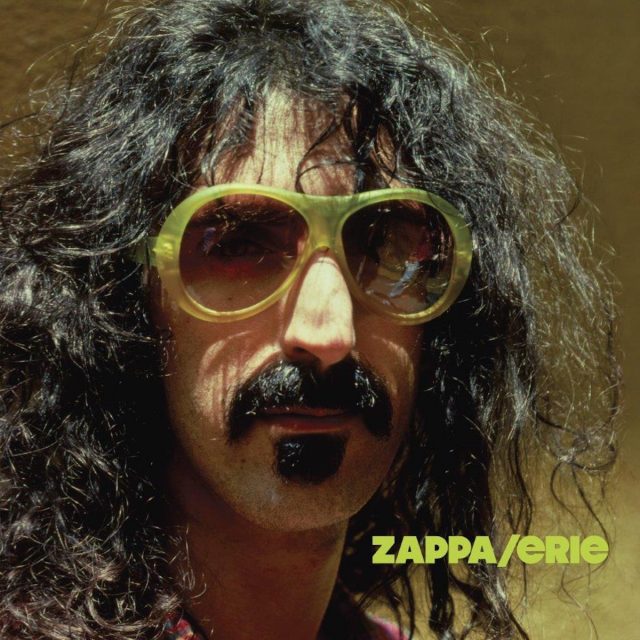 THE EDITED PRESS RELEASE: “The latest audio treasure to be excavated from Frank Zappa’s vast and legendary vault, Zappa/Erie brings together an exciting trio of shows that the Maestro performed in Erie, Pa. and the surrounding area between 1974-76. The  six-disc box contains more than seven hours of unreleased, electrifying live performances from Zappa and three different lineups of incredible musicians from this peak period. Of the 71 tracks, only 10 minutes have been released before — on Zappa’s classic 1974 live album Roxy & Elsewhere — outside of the amateur recordings that have been passed around on the bootleg tape-trading circuit.

Overseen by the Zappa Trust and produced by Ahmet Zappa and vaultmeister Joe Travers, Zappa/Erie boasts detailed liner notes about the shows and recordings from Travers, along with Erie journalist Dan Schell, author of 9 Years Of Rock: The Story Of The Concerts At The Erie County Fieldhouse. The liners are rounded out with photos by David Smith, images of the original tapes, concert fliers, a newspaper review of one show, and a scathing rebuttal to the review from a passionate fan. The audio, which was professionally recorded on four-track tape by Zappa’s team of engineers — Bill Hennigh, Brian Krokus, Davey Moire and Claus Weideman — was newly mixed from the original tapes by longtime associate Craig Parker Adams at Winslow Ct. Studios and mastered by John Polito at Audio Mechanics, who both also aided in restoring the audio as needed, to present these historical concerts as cleaned up as sonically possible.

The three shows included on Zappa/Erie are presented in chronological order and trace Zappa’s history with the Pennsylvanian lakeside suburb. The set kicks off with a concert at Edinboro State College, a local university outside of Erie, on May 8, 1974, followed by Zappa’s first proper concert in Erie at the Gannon Auditorium at the private, Catholic, Gannon University on Nov. 12, 1974. It concludes with what would be his last Erie show, held at the Erie County Fieldhouse on Nov. 12, 1976. In addition to the full shows, several performances from South Bend, Toledo and Montreal, in the same time period are included as bonus tracks. 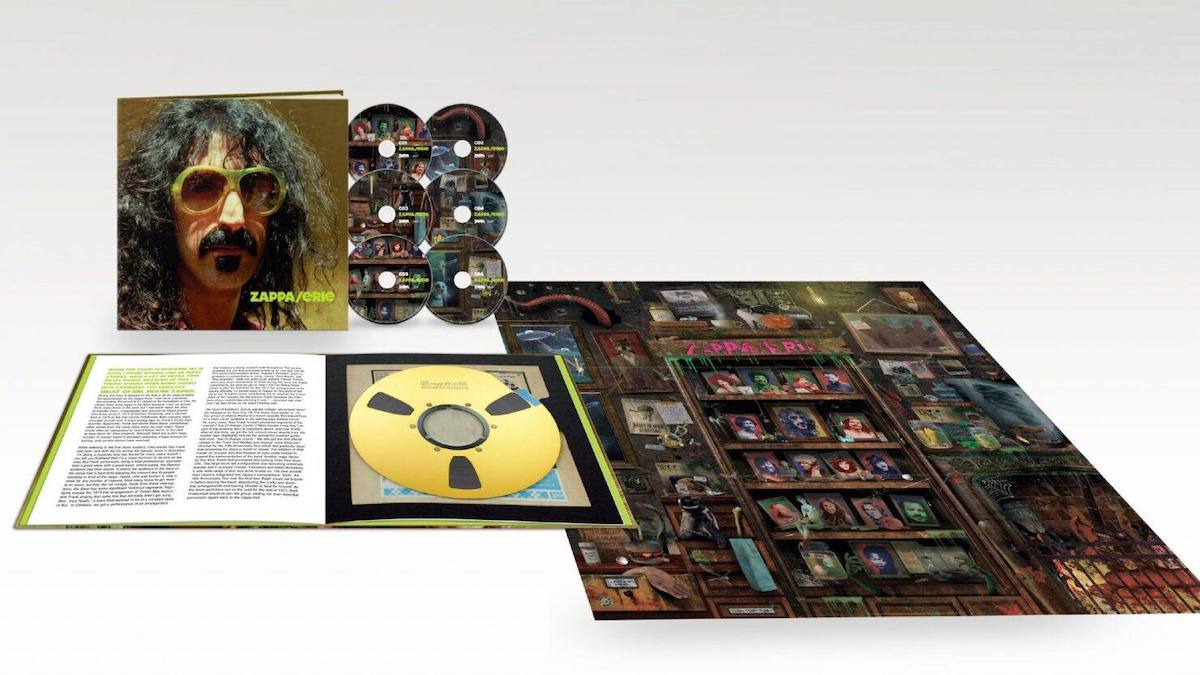 The Edinboro concert in ’74 was part of a small, month-long run of shows celebrating the 10th anniversary of Zappa’s ever-evolving band The Mothers, as well as his just-released album Apostrophe (’). Zappa’s formidable band for the tour was made up of Bruce Fowler on trombone and vocals; Chester Thompson on drums and percussion; Don Preston on synthesizer; George Duke on keyboards, synthesizer, and vocals; Jeff Simmons on guitar and vocals; Napoleon Murphy Brock on tenor sax, flute and lead vocals; Ralph Humphrey on drums; Tom Fowler on bass; and Walt Fowler on trumpet. As Travers writes, “The addition of Walt Fowler on trumpet and Don Preston on keys really helped to expand the instrumentation of the band. Another major factor, by this time, Frank had purchased two Ludwig Octa-Plus drum sets. This large drum set configuration was becoming extremely popular and it provided Chester Thompson and Ralph Humphrey a new wide range of tom-tom sizes to play on. The new sounds were cleverly integrated into Zappa’s compositions.”

Part of the repertoire for the tour was a medley of songs that Zappa constructed from the Mothers of Invention’s 1966 debut album Freak Out and 1968’s We’re Only In It For The Money, but with significantly altered arrangements. Zappa/Erie marks the first time these renditions, as well as a full concert from the 10th anniversary tour, will be released. Spread across disc 1 and 2 of the collection, some of the concert’s many highlights include Cosmik Debris, a great, funky arrangement of Pygmy Twylyte, Montana, Cheepnis, Inca Roads (with a strong cowbell motif throughout), and the radically reconfigured versions of early Mothers tracks like Hungry Freaks, Daddy, Wowie Zowie, How Could I Be Such A Fool, Harry, You’re A Beast and The Idiot Bastard Son. Although never officially released, the show has grown in stature thanks to a board cassette that leaked from Zappa’s inner circle and has been available in the bootleg world for many years. It’s from this show that Zappa used segments of Son Of Orange County and More Trouble Every Day for his beloved Roxy & Elsewhere album. Now, finally, nearly five decades later, the full concert mixed from the master tape is being made available.

When Zappa rolled into the Gannon Auditorium that fall, he was backed by the slimmed-down lineup of Thompson, Duke, Brock, and Fowler, with the venerable Ruth Underwood rejoining on percussion. Despite suffering from the flu, Zappa soldiered through like the professional he was and delivered a strong performance with an equally strong band. The setlist varied greatly from the previous show a few months earlier; highlights include the 1974 live arrangement of Dinah-Moe Humm, with Zappa singing the extra line that normally didn’t get sung, the constantly in flux Inca Roads, Penguin In Bondage, Uncle Meat and Don’t Eat The Yellow Snow. Zappa’s guitar improvisation during Dupree’s Paradise provides a glimpse of compositions to come, mainly Zoot Allures and Any Downers. Aside from battling illness, Zappa also grappled with an unruly audience who were clashing amongst themselves because those in back were upset the people in the front wouldn’t sit down. Zappa stopped the show several times to get the crowd under control and fans get to hear how he handled the situation. 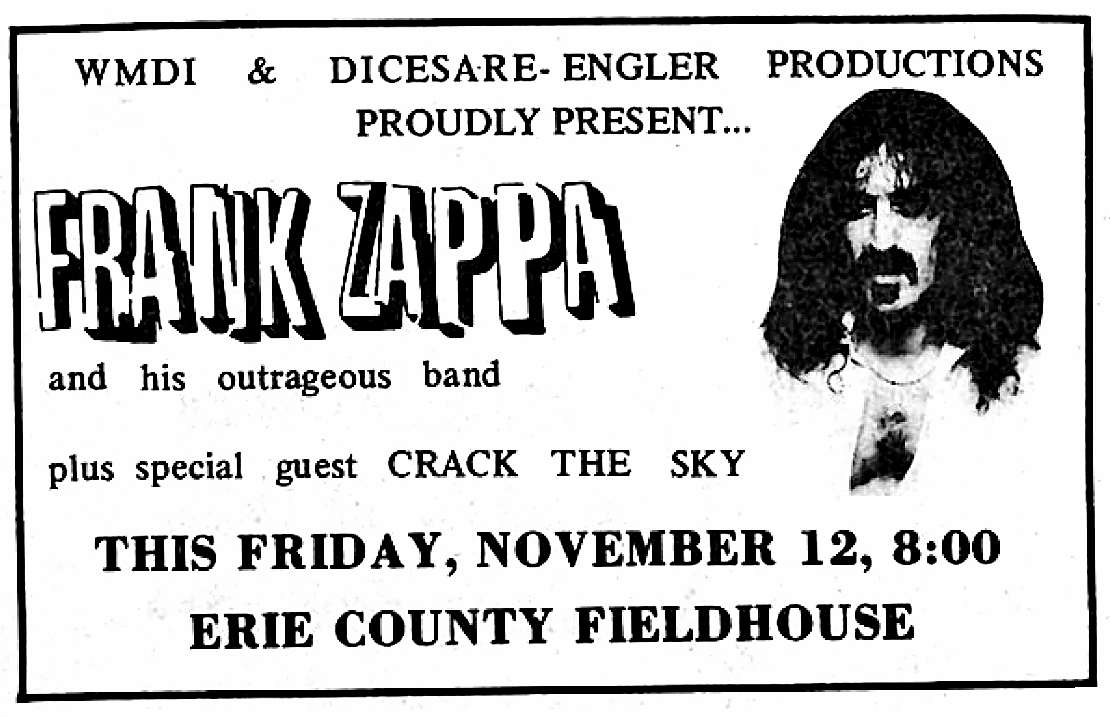 By Nov. 12, 1976, when Zappa returned for what would be the last time, he had graduated to the Erie County Fieldhouse. Armed with a different line-up, the band consisted of Eddie Jobson on keyboards and violin, Patrick O’Hearn on bass and vocals, Ray White on guitar and vocals, Terry Bozzio on drums and vocals, and Lady Bianca on keyboards and vocals, who would leave the band a week later after touring for only a month. Although Zappa and the band put on a great performance, the show wasn’t without drama — a sudden blizzard threw a wrench into things, so the light and sound equipment didn’t make the show in time. At the last minute, rented systems were acquired, leading fans to complain that they “didn’t get their money’s worth.” The setlist features tracks from the albums Apostrophe (‘), Over-Nite Sensation and Zappa’s newest LP at the time, 1976’s Zoot Allures. Songs like The Torture Never Stops and Black Napkins showcase extraordinary, extended guitar workouts from Zappa on the then-new compositions. A bonus version of Black Napkins from a Toledo show the following night ends the set and exemplifies how Zappa would rework songs from show to show.

Assembling the set was something of a passion project for Travers, who grew up in Erie. Although he had seen the tapes marked “Erie” in the vault during his 27 years as vaultmeister, it wasn’t until the pandemic that he finally gave these shows a listen and realized they were too good not to release. “When the Covid-19 pandemic hit in 2020, I found myself, like so many others, with a lot of extra time on my hands,” Travers reveals in the liners. “Because of this, I threw myself even more deeply into archiving the fabulous vault of Mr. Frank Zappa. During this time, it dawned on me that in all my years being the Vaultmeister for Zappa, I had never prioritized documenting the concerts FZ played in my hometown of Erie, Pa.”

The Erie booklet includes an autographed polaroid of Zappa that Travers’ mother excitedly picked up for him at a local Erie garage sale sometime in the ’90s. For years it’s been tucked away for safekeeping, and only when working on this release, did Travers reexamine it only to realize it was most likely taken at the Erie County Fieldhouse in 1976. So now, more than 46 years after it was snapped and two decades after Travers mother gifted it to her son, it has made its way into the packaging chronicling Zappa’s Erie shows, bringing everything full circle.”