Thanks to the inexplicable popularity of my Submit Music page, I always have a digital backlog of albums, EPs, singles and videos awaiting my perusal. Here are the latest submissions that caught my ears and eyes. As usual, it’s a pretty eclectic lineup — ass-kicking Sunset Strip-style sleaze rock, Swedish occult metal, pop songcraft, sonic experiments and plenty more. Something they all have in common: Any one could easily be your new favourite artist. To that end, I’ve included Bandcamp links wherever possible so you can buy the music straight from the source. Tell ’em I sent ya. And if you’ve got something I need to hear, send it my way. If I think you’re half as good as you think you are, I just might include you next time. 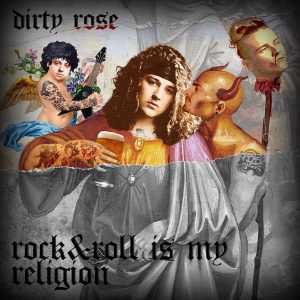 THE EDITED PRESS RELEASE: “Fronted by National Air Guitar Champion and X Factor “nightmare” contestant Sven Smith, Dirty Rose are on a mission to bring back rock and roll, but FOR REAL THIS TIME. Expect loud guitars, heavy drums and maybe even a freakin’ keytar solo?! Ben Draper, the miniature-sized guitar god is sure to melt your face off with his fiery blues and sizzling classic rock-inspired solos. Jack Price is bringing scene-queen fashion back from the 2005 with metalcore-inspired bass (ie: Lack of technical ability, but he’s hella cute so who cares) and newest member Rory Levell backs the band by hitting harder than Chris Brown … (Can we say that?).”
MY TWO CENTS: I read their bio, rolled my eyes and was all geared up to hate this. Then I played the first song and laughed out loud at how fucking awesome it rocked and how gloriously stupid it was. Damn them all to hell. So, is it still a guilty pleasure if I don’t feel guilty? 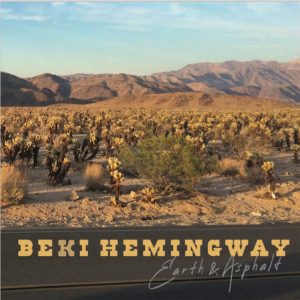 THE EDITED PRESS RELEASE: “The tall tales and small stories captured on Beki Hemingway’s new album Earth and Asphalt suggest that her audience has a lot of catching up to do, with assurance that it will be time well spent. Much has happened since the release of 2017’s Whins and Weather, a collection that also marked seismic shifts in Hemingway’s personal foundation. The singer and her musical partner Randy Kerkman had fearlessly pulled up roots in Denver and emigrated to Ireland during the fall of 2016 in order to undertake musical adventures, travel, and public service. The pair are now settled in Dundalk. With ample time steeped in everyday Irish life, longtime listeners might expect Earth and Asphalt to reveal traces of regional folk music. “We thought we might be influenced by the Celtic music, but it turns out that being here has only made us sound more American,” says Hemingway. Various songs reveal fondness for roots, rock, cowpunk and country torchbearers including Lone Justice, The Blasters, Emmylou Harris, Julie Miller, Neko Case, John Mellencamp and Hank Williams. Ultimately, the miles traveled across Earth and Asphalt reflect an inward journey. “Despite having more geographical song titles than usual, the album is more about a place in my soul than any points on the map,” says Hemingway. “What is the balance between being somewhere different each night to sing, and being grounded in a community where I can invest in people as a consistent and reliable friend? I have really come to value the people who love me no matter what, and I’m trying to figure out where I belong.”
MY TWO CENTS: You can take the roots-rocker out of Denver, but etc. 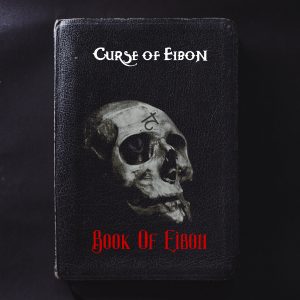 Curse of Eibon
Book of Eibon

THE EDITED PRESS RELEASE: “In 2020 the modern curse called Covid19 drew four people from the north together to create the music. The mysteries and fascination of the occult and the things beyond gave birth to Curse of Eibon. The unstoppable force from beyond can’t be tamed and they are the heralds of the great old ones waiting to invade our plane of existence. Raw death metal with chilling atmosphere and melodies are the hymn of the gods beyond. Book of Eibon is the debut EP from melodic death metal act Curse of Eibon. Follow the band down the road of madness and cosmic horrors and the occult. Strap down tight cause it’s going to be one hell of a ride. The songs are inspired but the thrilling world of H.P. Lovecraft.”
MY TWO CENTS: Keep the lights on. 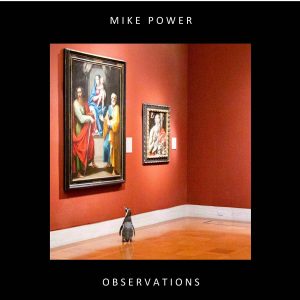 THE EDITED PRESS RELEASE: “A veteran of New York City’s underground music scene, Mike Power played on the stages of such beloved lost venues as CBGB and Kenny’s Castaways, as well as survivors like Arlene’s Grocery and The Bitter End, as singer and bassist with Late Model Humans. While quarantining from the global pandemic, he worked remotely with other artists to record his first solo album, a collection of new music called Observations that alternates between his punk roots and introspective acoustic pieces. “This work was created during the pandemic and awakening racial and gender equality movements of 2020 and is dedicated to the women and men in hospitals and in the streets, behind the wheels and cash registers, in cages and the corridors of power, who struggle and sacrifice to make this world a healthier, fairer, and kinder place.”
MY TWO CENTS: You don’t have to be an old punk to enjoy it. But it helps. 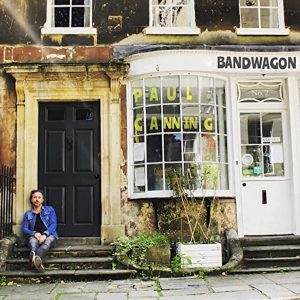 THE EDITED PRESS RELEASE: “Paul Canning is a singer-songwriter from London. Amongst all of his accomplishments he has never supported Coldplay or written a song with Paul McCartney. He has however written and released two albums and an EP to much critical acclaim. Taking inspiration from The Beatles, Crowded House, Elton John, Harry Nilsson, Billy Joel and 10cc. Paul’s Music has been described as a “blueprint-style yesteryear brand of rock ’n’ roll.” Paul has supported 10cc on their U.K. tour culminating in a solo acoustic performance at London’s Royal Albert Hall. He is also occasional lead singer of 10cc when called upon.”
MY TWO CENTS: A pure dose of pop-rock nostalgia. 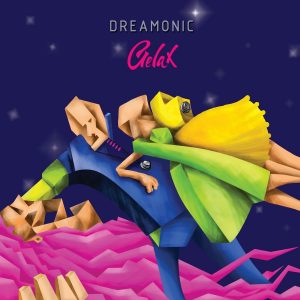 THE EDITED PRESS RELEASE: “Dreamy vocals, alienated lyrics, hypnotic grooves, guitar loops and climaxing conclusions of sound equals fantasy indie music of GelaX. Combining the familiar sounds with a darker twist into alien territories, to keep you on your toes. Their venture started in Torontoin 2016 as a due between GelaxKey and TareqAz after fleeing their dictatorship countries from persecution to pursue music and find a new beginning. Using their passion and shared philosophy on life, hopes, ambitions, cynicism and a strong appreciation of Depeche Mode and Radiohead as an outlet to fuel their songs of protest against oppression, discrimination and cultural shackles. Drawing inspiration from various genres, fashion styles and statements, avant-grade art and videos, GelaX combine multi colourful visuals and DIY experimental photos against darker moods and subject matters to go along with their chameleon-esque style of fantasy music, as evident in their Instagram. Genre-bending, fantasy rock GelaX’s debut EP is unapologetic & experimental as it is accessible and familiar. Produced by Juno winner Timothy Abraham (Liela Biali, Royal Wood) and mastered by Joao Carvalho, it explores themes of what it means to be human, infinite time, pursuit of happiness and misogyny all while staying in an escapist’s fantasy land.”
MY TWO CENTS: Don’t sleep on this one. 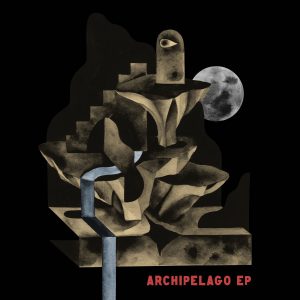 THE EDITED PRESS RELEASE: “Archipelago is a tale depicting a poetic journey into a sombre universe. Eerie and intriguing, the music captures our attention for its duration and leaves us wanting more. Mixing classical with modern electronic production, the musicians take us on a cinematographic adventure where your imagination will flow freely. Close your eyes and let the music do its thing. Jesse Koolhaas was joined by the brilliant violinist and composer Myrthe van de Weetering to create this beautiful album. They are accompanied by Héctor Hervás Veredas playing the cello on all tracks and Bjørn Waling on drums for Mental Travelogue.”
MY TWO CENTS: Art in a sophisticated groove. 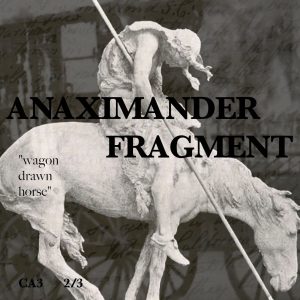 THE EDITED PRESS RELEASE: “After 25+ years of fighting the good fight — ie: making DIY art-punk in the face of near-total indifference — Mr. Anaximander Fragment (aka Adam G, aka Hatestick, etc) now brings you… Wagon Drawn Horse. Originally conceived in 2013 in Santa Monica as the middle chapter of a trilogy (intended to be credited to three different pseudonyms), the unfinished LP was revived in the Spring of 2020, radically revised and rewritten, and now presented here as a kind of palimpsest of two different periods of creativity, angst, and upheaval. All well and good, certainly, but what matters to the potential listener is simply, “what does it sound like?” The safest answer would be some sort of first-draft tripe like “a deeply idiosyncratic form of DIY post-punk that nods to The Residents, Faith-era The Cure, Minimal Man, and The Fall, while forging a dark, post-goth naïve-art all its own.” Or even, “RIYL — homemade electronic art-punk with lyrics steeped in existential despair.” Mastered by Kramer, it also sounds pretty thrilling, especially on good headphones while staring at the ceiling, wrestling with angels, and/or wondering where it is that your thoughts really come from.”
MY TWO CENTS: Music to make your brain itch. 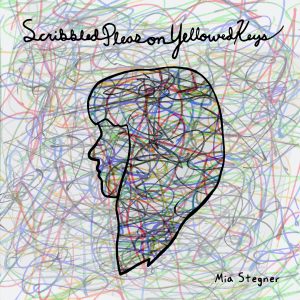 THE EDITED PRESS RELEASE: “A storyteller at heart, Mia Stegner views music as an avenue to ask questions, seek answers, and ponder both personal and collective pieces of the human experience. In her mind, no topic is too big or too small to explore, from the risks of treasuring a newfound friendship to the ethereal appeal of bath time. Musically, Mia is influenced by a variety of artists and genres, and is most often compared to Ingrid Michaelson, Regina Spektor and Fiona Apple. Mia’s songwriting experience is extensive and eclectic; growing up, she gained a musical foundation from singing in choirs, listening to music, taking piano lessons, and teaching herself guitar and ukulele. She first began writing songs in middle school, as a way to express herself and develop her skills as a musician and writer. In high school, she began sharing her work on YouTube, and released her debut album Play. Since then, she has released four more albums. In November 2020, Mia’s song Very Next Day won the weekly Stuck at Home John Lennon Songwriting Contest. Her single Quiet Chaos was selected for the 2020 Hidden Lantern Arts Festival, an organization dedicated to “ending the stigma surrounding mental illness and starting conversations about mental health through the healing power of artistic expression,” a goal which Mia shares. Through her music, Mia aims to promote empathy, understand the depth of her own thoughts and feelings, and make others feel less alone.”
MY TWO CENTS: She’s a charmer.