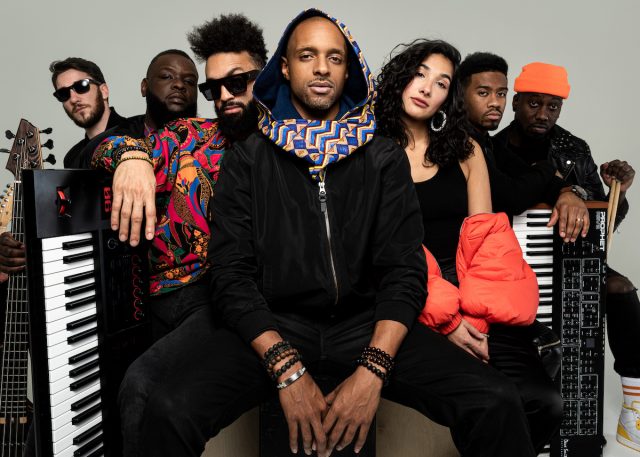 Fredy V. & The Foundation put their best foot forward (and back again) in their new single and lyric video for One Step — showcasing today on Tinnitist.

Fusing old-school ’80s funk with an inspirational and topical message, the upbeat number offers an enticing preview of Fredy V. & The Foundation’s forthcoming EP, also named One Step and set for release on Oct. 30.

“It’s got a nostalgic mood while still remaining relevant through its lyrics,” Fredy V. says. “There’s an empowering message in there, too — the importance of taking a leap of faith towards your purpose. It’s an anthem for aspiring performers, creatives, and entrepreneurs.”

The notion fits with the inspiration behind the EP, he adds; in the spirit of the single, Fredy V. & The Foundation have partnered with the Montreal-area Dynastie Sports Institute — not your average basketball academy. “Dynastie are dedicated to recruiting and developing high-level French-speaking talent from countries like Congo, Guinea, France, and Ivory Coast with the goal of ushering the next wave of NBA players out of Quebec,” Fredy explains. “The journey of an aspiring professional basketball player and the come up of independent artists are very similar in numerous ways; there’s lots of crossover in the goals, including ownership, entrepreneurship, positive media relations, and a mission to improve their respective communities.”

The song’s video was shot at the institute and features the ’20-’21 roster, and a documentary detailing the unique journey of Dynastie and its players is in the works. As for looking ahead to the album, “we got some for everybody!” Fredy enthuses.

From his breakthrough solo release, 2017’s #ItTakesAVillage, to performing at the Montreal Jazz Fest and Cape Verde’s Atlantic Music Expo, Fredy V. continues to bridge the gap between his North American and West African cultures through a now-signature funk, Afro-pop and R&B sound. For their part, The Foundation are highly skilled first-call musicians known for playing with the world’s top R&B, hip-hop, funk, gospel and jazz acts. After gaining collective experience from producing and performing for a national TV show aired weekly, the group used their momentum and for the first time began creating new music together.