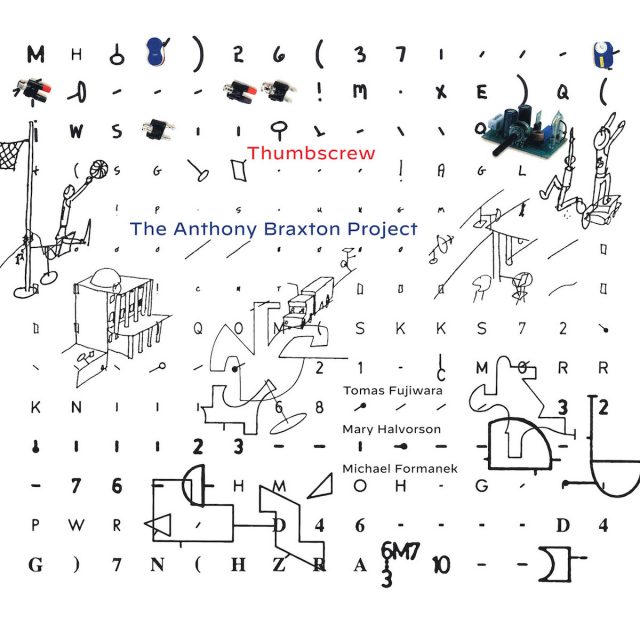 THE PRESS RELEASE: “Celebrating Anthony Braxton on his 75th birthday, Thumbscrew digs into the Tricentric Archives, focusing on previously unrecorded pieces by the legendary composer, multi-wind master and bandleader. The all-star collective trio — drummer Tomas Fujiwara, guitarist Mary Halvorson and bassist Michael Formanek — releases its fifth album, The Anthony Braxton Project. For fans familiar with Braxton’s music the project offers a whole new window into his genius for designing protean musical situations pregnant with possibilities. Those less acquainted with his work might find themselves enthralled and amazed by the sheer diversity of rhythmic and melodic material explored by Thumbscrew. Invited to explore the Tri-Centric Foundation’s voluminous Braxton archives in New Haven, Conn., as part of the Braxton75 celebration, the trio spent a long afternoon looking for rarely played pieces that could fit their instrumental palette. “The idea was for us to choose compositions of Anthony’s, mostly early compositions, which hadn’t been previously recorded (or, in a couple cases, recorded only once or twice),” says Halvorson. “We chose pieces that captured our imagination and that we thought would work well for the instrumentation of guitar, bass, and drums or vibraphone. Our choices included graphic scores, complex notated pieces, and everything in between.” Like with several previous Thumbscrew albums, the triumvirate used an extended, four-week residency at City of Asylum in Pittsburgh to prepare for the recording. Working on the music daily (while also honing a new book of original Thumbscrew compositions), they developed arrangements of varying detail based on the scores and the corresponding catalogue notes for each composition. While aiming to understand and execute Braxton’s intention with each piece, the nature of his music required them to shape the material anew. “We have a shared language in terms of how we improvise, but the composition very much guides and informs our improvisations, so having music from a new composer puts us in a different frame of mind and adds another layer to what we do as a trio,” Fujiwara says. All three of the members of Thumbscrew have had significant performing and / or study opportunities with Braxton, so they all can approach this music as ‘insiders’.”