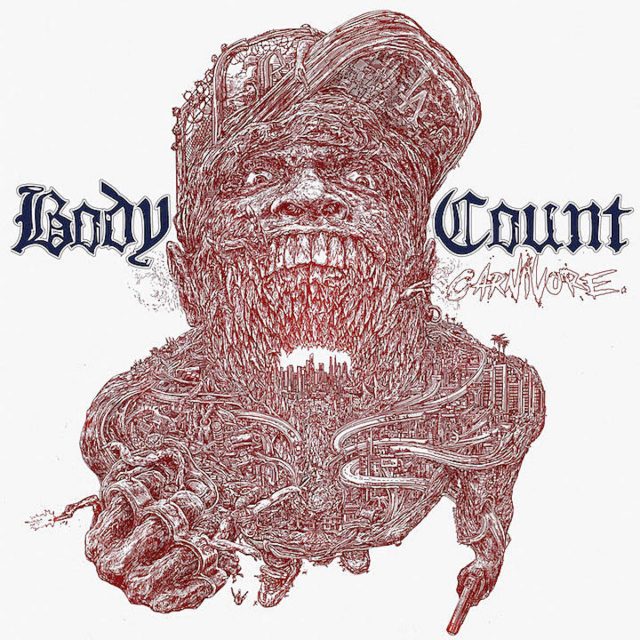 WHO ARE THEY? The long-running thrash metal crew fronted by eternally hustling OG rapper-turned-actor-turned-reality-star-turned-podcaster-turned-documentary-host Ice-T. Also the answer to the bar-trivia question: What band sparked a massive firestorm and and even earned criticism from U.S. President George H.W. Bush with their 1992 song Cop Killer? And for bonus irony points, what’s the name of the cop their frontman has played on Law & Order: SVU since 2000.*

WHAT IS THIS? Their seventh album since 1992 — which makes the band Ice-T’s longest-running musical or acting endeavour by several years — and their third disc since returning from a period of relative inactivity.

WHAT DOES IT SOUND LIKE? Ice-T bellowing and barking at the top of his lungs over a B-grade rock band. So, pretty much like every other Body Count album. Though there’s no denying Ice and guitarist Ernie C have become a little more proficient at writing coherent, memorable songs. As usual, they’re smart enough to bolster their ranks with plenty of guests — including Evanescence siren Amy Lee, Hatebreed’s Jamey Jasta, Power Trip’s Riley Gale, erstwhile Slayer drummer Dave Lombardo, punk gadfly Jello Biafra and more — and to pad out the set list with ringers like Motörhead’s Ace of Spades and two turbocharged revamps of Ice’s old rap hits.

WHAT ARE THE DUMBEST LYRICS? “Watched my mother clean a fish / Gut a chicken, make a dish / I eat life to stay alive / Even plants are still alive.”

WHAT SHOULD IT BE TITLED? Body Count By The Numbers.

HOW SHOULD I LISTEN TO IT? While cruising slowly through the swankiest neighbourhood of town in your low-riding, pimped-out ’64 Impala as you and your shirtless crew glare menacingly at old white people.

WHAT ARE THE BEST SONGS? Ace of Spades and Ice’s revamped Colors and 6 In Tha Morning are the easy entry points, but old-school originals like Bum-Rush, Another Level, No Remorse and The Hate Is Real also make a strong impression.

WHAT WILL MY FRIENDS SAY? ‘This is all good, but would it kill him to make one more great rap album?’

HOW OFTEN WILL I LISTEN TO IT? Well, there aren’t a whole lot of classic-sounding thrash bands on the scene right now, so assuming you’re a fan of the genre, this is pretty much the only game in town.

IF THIS ALBUM WERE AN ACTUAL CARNIVORE, WHAT WOULD IT BE? A honey badger — because much like Ice-T and co., honey badger don’t give a fuck.

SHOULD I BUY, STREAM OR STEAL IT? If you know that the answer to * is Odafin “Fin” Tutuola, you’re enough of a fan to pay. Plus, stealing from Ice-T doesn’t seem like a wise move. Unless you want him to cruise by your house and glare menacingly.