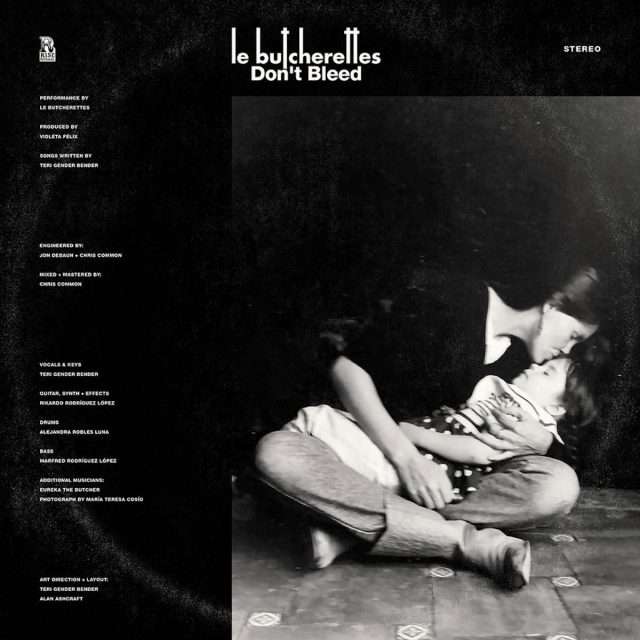 WHO ARE THEY? The aggressively artsy Texas-based garage-punk outfit fronted by singer-guitarist and songwriter Teresa Suárez Cosío aka Teri Gender Bender.

WHAT IS THIS? A seven-song EP of new originals and their followup to their uncompromisingly fierce and disturbingly personal fourth album bi/MENTAL, which jumped fans just over a year ago.

WHAT DOES IT SOUND LIKE? Well, it’s calmer and more self-composed than bi/MENTAL — mostly since it would be pretty damn hard to come up with something even more explosive and ferocious. For these tunes, Teri and co. actually take an intriguing turn into new terrain — they’ve turned down the guitars and turned up the synthesizers, swapped the slamming beats for deeper grooves. But don’t think they’ve watered down anything: According to Teri, the disc’s title is “a powerful double meaning of being told not to bleed as a woman and feeling shame of blossoming, so with time we are manipulated to hide in the darkness and our blood calls out to the forest creatures pulling them in closer to us for the hunt, even if we hide we are exposed.” Got it?

WHAT ARE THE MOST REVEALING LYRICS? “Time changed our ways / We came across the many selves / No one felt a difference but I’ve come to notice the truth.” And then blow your mind with it.

WHAT SHOULD IT BE TITLED? Sanguine Disposition.

HOW SHOULD I LISTEN TO IT? While waiting for the other shoe to drop.

WHAT ARE THE BEST SONGS? The synth-rockers Out For You, Tunisia and Now I Know; the slow-burning Don’t Bleed, You’re In The Middle Of The Forest.

WHAT WILL MY FRIENDS SAY? ‘Even when she’s quieter, she still scares the hell out of me.’

HOW OFTEN WILL I LISTEN TO IT? For those used to the band’s more high-velocity fare, it might be something of an acquired taste. But it’s one worth acquiring.

IF THIS ALBUM WERE A COLOUR, WHAT WOULD IT BE? Pitch black — flecked with blood, of course.

SHOULD I BUY, STREAM OR STEAL IT? At just 20 minutes, it’s only a mandatory purchase for fans and completists.