Home Read Bart Budwig | Another Burn On The AstroTurf 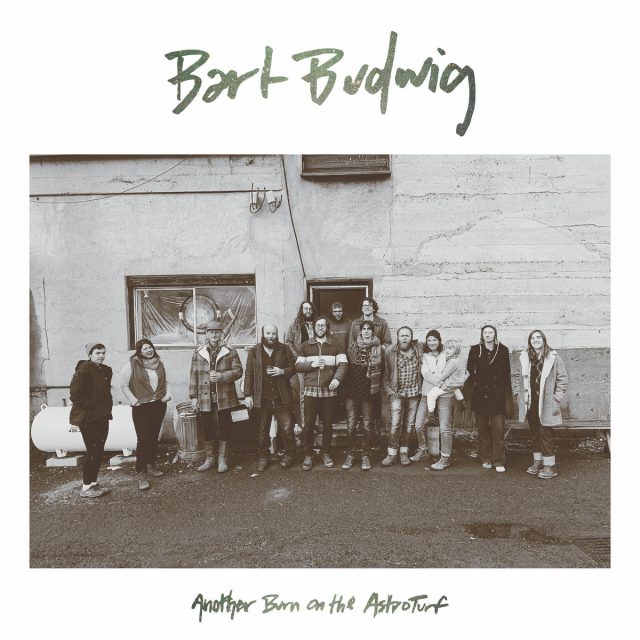 Another Burn On The AstroTurf was recorded over five days by a seven-piece band inside the OK Theater. It’s a melancholy rhapsody that recalls the uncorked rock n’ roll spirituality of king mystic Van Morrison, the gloomy nostalgia of dark prince Nick Drake and the songcraft sans self-seriousness of ’70s Muscle Shoals. Like those psycho-spiritual song crafters, his power comes from vocal idiosyncrasies – intonations of love, impermanence, hope, humor. The album opens with Budwig originals Time For Two, First To Go, and Strong Coffee – originally presented with just solo guitar (and crackling wood stove) on the album Sabai. The songs are recorded here live, full band, in medley, with hot electric guitar, woody double bass, and drums. The band electrifies and scourges the flesh of the songs into fully formed folk rock stunners. The brightest moments on the album come from a transcendent Rolling Stones Beast Of Burden homage, Rolling Stoned, in which he ponders if he is, in fact, bad enough, rich enough, good enough. The answer is, of course, not, but he also humorously notes that if any of us were that good, then aren’t we better off with … something better? His musical similarities to spiritual seekers Van Morrison and Nick Drake are undeniable now, but he’s not lost on the path as them, he’s grounded, infectiously grateful. Bart’s mastery of dramatic irony turns his work with complex emotional states of being into comforting, uplifting, relatable music.

Some folks got it. Some folks don’t. Some so lousy, they never won’t. Oregon singer-songwriter Bart Budwig has it in spades. Whatever the hell it is. Truth be told, I’m not exactly sure. I doubt even he is. After all, he’s not the kind of singer that blows you over with his power or technique. Nor is he a songwriter who reinvents any wheels or makes you look at life from a totally new perspective. He’s just one of those guys who naturally stand out from the pack. All he has to do is what he does: Spin a straightforward tale or voice a simple sentiment with his lightly twangy, sax-like baritone and likeably laid-back, comfortably understated fusion of country, roots-rock, folk, gospel and Americana. Doesn’t matter whether he’s cranking out some raw-boned rock about being better off alone, covering tragic hero Nick Drake, revamping The Rolling Stones, retooling songs he’s already recorded or singing about strong coffee and lost socks (which he does; see below). He finds a way not only to drill down deep and fully inhabit his lyrics and melodies like Van Morrison, but also manages to pull you into the mystic with him and keep you there until he’s damn good and ready to let go. Plus, as is the way with artists like him, he makes it seem as easy and natural as falling off a barstool — there’s no pretense, no contrivance, no precious bullshit. Just the real deal. That’s why, out of the hundred-plus submissions I get every week, I remembered his name based on a few tunes his label sent my way over the past few months. And why he’ll most likely get inside your head too once you give him a spin. Trust me. You’ll get it.