Home Hear Indie Roundup | A Six-Pack of Tunes for Tuesday 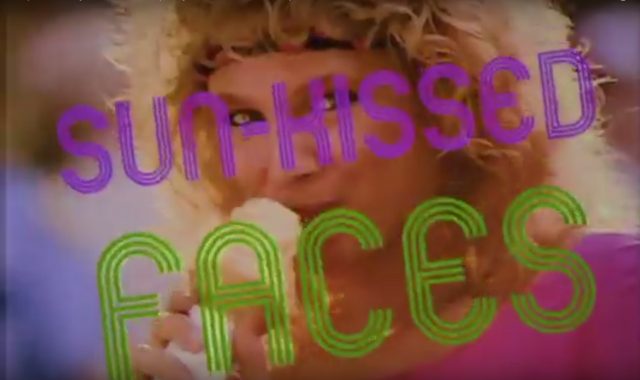 1 Every summer needs an anthem. And the sooner, the better. Here’s an early contender: High Top Kicks by Fake Crush. It’s got pretty much everything you want — assuming what you want is instantly addictive surf-pop loaded with chugging guitars and a driving beat, ba-ba-ba vocals and meaningless lyrics, and a video full of cars, motorcycles, skating, amusement park rides, dancing and beach shots. If not, why not? SAYS THE PRESS RELEASE: “Get ready to embrace the carelessness of summer! Please place your boombox in a lawn chair by the pool. Apply the appropriate amount of sunscreen before listening. Our debut single was inspired by delusion, tequila and the beach… Lyrics were forgotten, phrases were mumbled. Drum sticks and rhythm were sacrificed in the efforts to harness an airborne beverage. High Top Kicks is entirely imperfect, and we wouldn’t have it any other way!” Me neither:

2 Some people take dance contests way too seriously. But hopefully not as seriously as Ty Segall does in the video for his new song Taste, which also serves as a first taste of his his Aug. 2 album First Taste. If that’s confusing, sorry. At least I didn’t cut you in half for your shoes. SAYS THE PRESS RELEASE: “Our salivating makes it all taste worse,” croons Ty Segall in Taste. He’s talking about us: how we’re the masters of our own destiny, tellers of our own prophecy, makers of our own sickened choices. It’s a warning, but this time, the finger is pointing back at him too. He’s one with us. First Taste is an introspective set for Segall after the extroversions of 2018’s Freedom’s Goblin. Lines of struggle wind through the songs as Segall reflects on family, re-encountering pasts, anticipating futures. He skates through oneness, self-esteem, the parents – all the joys of a rain-filled childhood – while reaching outward in the here and now, feeling for a shared pulse.” Just don’t turn your back on him:

3 While we’re on the subject of Ty Segall, here’s the latest tune from Shannon Lay, a member of the L.A. rocker’s Freedom Band. Her song is titled Nowhere. It’s a quietly intense folk-pop strummer from her debut solo album August, fittingly due Aug. 23. SAYS THE PRESS RELEASE: “I want this song to emphasize the importance of enjoying the journey. The video is moments of in between travel footage, different settings around my home, singing in the bounty of spring. There is so much power in presence, enjoy every moment, savor every second. Cherish the memories made along the way and appreciate how they change and shape you.” Will do:

4 I have a bone to pick with (Sandy) Alex G. Here’s the thing: I’ve been cataloguing my albums recently, and I have no idea where this singer-songwriter belongs. Should be under S for Sandy? A for Alex? G for his real last name Giannascoli? Or with the all other signs and symbols because of the ( at the front of his name? All of this has nothing whatsoever to do with his woozy and excellent new cut Gretel, a preview of his Sept. 13 album House of Sugar. Not does it explain the demolition-derby video. But it still kinda bugs me, you know? SAYS THE PRESS RELEASE: “Giannascoli began writing the songs that would ultimately become House of Sugar in the fall of 2017. Whereas with earlier efforts, such as 2011’s self-released Winner or the landmark 2014 release DSU, music was written and recorded at a prolific clip, with these new songs Giannascoli approached the recording process with a newfound deliberateness, concentrating on a smaller collection of songs and laboring over each with more focus and acuity than ever before.” Yo, G:

5 If you had to sum up The Dollyrots in three words, in your face wouldn’t be the worst option. Some other ones might be crunchy pop-punk, hooky garage-rock, and totally freaking cool. But let’s stick with the first option, since In Your Face happens to be the title of their latest single and video, a preview of their July 12 album Daydream Explosion. SAYS THE PRESS RELEASE: “Daydream Explosion is filled with raw vitality coursing through each of the tracks. The Dollyrots’ signature spirit shines through in snappy guitar riffs, irresistible hooks, and punked-out percussion.” Good to know:

6 When somebody sends you a song called Hopeless, it’s only natural to assume you’re about to be subjected to an introspective, depressing folk ballad. Unless the person in question is Ontario singer-songwriter Keegan John Trumpour, who records under the handle Opeongo. In that case, you’re in for an idiosyncratic offering fueled by his rusty yelp and laced with searing guitar, gospel vocals and brass solos. Go figure. SAYS THE PRESS RELEASE: “However devastating and tragic things may seem within this life, no component of it or of yourself is truly hopeless. My new song, Hopeless, is more a documentation of a feeling than it is a reflection of my true state of being. It’s a reminder to acknowledge that no matter what you have to work through in your life, you’re still here to sing about it.” Or listen to someone else: