Matt Muse amuses, Bernice do double duty, Far Away get volcanic, Burly look the part and Ten Fe park it in today’s Roundup. My friend David gave me a bottle of dill-pickle vodka for Christmas. Now I just need some turkey-flavoured vermouth and I’m all set for holiday martinis.

1 It’s a music video. It’s a police procedural. It’s a tale of urban street justice that puts the ’hood in Robin Hood. It’s Don’t Tweak, the new single from Chicago rapper Matt Muse. It’s the first video from his latest album Nappy Talk. And if there’s any real justice in the world, it won’t be the last. SEZ THE PRESS RELEASE: “Don’t Tweak stands as my affirmation that despite all adversity, I’ll use my voice and art to make life better for my family, homies, & the south side. The video is a fun, Robin Hood-themed answer to my question in the second verse ‘How a young kid on the South Side gon sleep/When my schools closed & my mayor won’t see me?.’ ” Bow down above.

2+3 It’s the season for giving. So Toronto oddballs Bernice — none of whom are actually named Bernice, of course — are giving you not one but two treats this week. And doing their bit for charity as well. It all comes together in their new holiday tune below: The offkilter Leonardo (And What He Wants For Christmas). If the lyrics sound childlike, no wonder; they were written by a nine-year-old in a Wisconsin children’s hospital for the American organization Sing Me A Story, which gets bands to put kids’ lyrics to music for fundraising singles like this. So before you enjoy the charmingly odd tale of Leonardo, be sure to hit the button and shell out a little something, OK? After that, feel free to to enjoy the video for their similarly skewed ditty He’s The Moon (above) at no cost. SEZ THE PRESS RELEASE: “The video doesn’t tell a story, but rather speaks visually the mood that the song sings — a kind of nostalgic peace, and a self awareness that can only come from time and experience, no matter how we might try to rush it along.” Double your pleasure:

4 Countless bands make music that takes you places. Far Away are the only band I know whose music takes you to Bolivia. Weeks after appearing here with a song inspired by the city of Uyuni, the French alt-metal outfit return with Uturuncu, titled after a dormant volcano in the country. Like its predecessor from their album Viaje, the suitably volcanic assault was presumably inspired by singer-guitarist Flo Lemonnier‘s South American travels — something the PhD fellow in Polar Climate Sciences apparently does when he isn’t working at an Antarctic research station. Seriously. How lazy do you feel now? SEZ THE PRESS RELEASE: “Never before has the state of the environment been so widely discussed. Humanity’s impact on the planet is now undeniable. The climate has already started changing and what this foreshadows is not reassuring. Let us not leave to the coming generations environmental damage so widespread that life itself is under threat. Our planet will survive with or without us, but it is up to all of us to decide what future we want. Now.” Away we go: 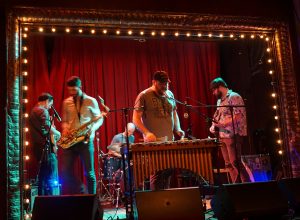 5 Some bands sound like their name. Other bands look like it. The former is definitely not true of the band Burly — or probably any band whose lineup includes a vibraphone player and a tenor saxophonist. Their intimately beautiful track Infinite Broken (from their EP Self-Titled Demon) only confirms the notion. Though the promo picture (right) that accompanies the track does seem to suggest that the latter might apply in their case. Just saying. SEZ THE PRESS RELEASE: “Infinite Broken begins as spaghetti western posturing adorned with smoke curls of saxophone and ends with a repeated plea for love. Connecting these two disparate points is a hushed arrangement of vibraphone, guitar, bass, brushed drums, saxophone, and plain-spoken vocals.” Heavy:

6 California is a nice place to visit. And a nice place to write songs about — as London pop-rockers Ten Fe make abundantly clear on their suitably warm and breezy single Echo Park, named for a Los Angeles neighbourhood. It comes from their next album Future Perfect, Present Tense, due in March. But you can head south right now. SEZ THE PRESS RELEASE: “It was written shortly after getting back from our tour of the States last year. We’d spent the last few days staying in an apartment in Echo Park, and hanging out in different places around the city, always driving around with the radio on. Our heads were still very much in that place when we returned home, and the more sultry feel of this song was evocative of that time. It’s a conversation between two friends, one offering his advice to the other — it’s in the spirit of being a band out in L.A, loved up, blissed out, getting each other’s backs.” California, here we come:

Indie Roundup | 46 Songs To Reckon With This Tuesday (Part 3)

Indie Roundup | 46 Songs To Reckon With This Tuesday (Part 2)

Indie Roundup | 46 Songs To Reckon With This Tuesday (Part 1)

Indie Roundup | 19 Songs To Ease You Into Another Week