Today’s headlines: A Runaways victory on Jeopardy, a pitch for some Oscar-mired collusion, a bunch of comebacks that nobody asked for and a descent into podcast infinity. Remember to state your answers in the form of a question: 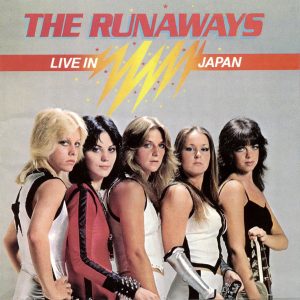 1 The current Jeopardy champion is a woman named Jackie Fuchs (above). Turns out she used to be known as Jackie Fox, the bassist in The Runaways (she’s on the far right in the album cover photo). And that’s she’s also been on Who Wants To Be A Millionaire? and some game show called The Chase. She’s not the first rocker to try her luck on the game-show circuit. Years ago, I remember seeing Faith No More drummer Mike Bordin on Who Wants To Be A Millionaire? Spoiler alert: He did not become a millionaire. Let this be a warning to anyone who still thinks rock ’n’ roll offers a pathway to fame and fortune: You’re probably better off memorizing state capitals and Norse mythology.

2 The misleadingly titled “short list” of 15 contenders for the Best Original Song Oscar was released, and it includes everyone from Willie Nelson (for When A Cowboy Trades His Spurs For Wings from The Ballad of Buster Scruggs) and Thom Yorke (Suspirium from Suspiria) to Kendrick Lamar and SZA (for All The Stars from Black Panther) and Lady Gaga and Bradley Cooper (for Shallow from A Star is Born). Given all the furor over Black Panther and A Star is Born, it’s probably safe to assume this category (and the Oscars in general) will be a battle between the two. And probably more divisive than the last U.S. election. Russia, if you’re listening, please get involved in this. If only to give an Oscar to Willie Nelson and make all of Gaga’s Little Monsters totally lose their shit once and for all.

3 Julian Casablancas (right) and his bandmates in The Strokes just announced a gig in Spain to kick off their so-called “global comeback” in 2019. Which is good news and all, I guess. But it seems a little grandiose coming from a band that released their latest EP and played some shows just a couple of years ago. It’s basically the rock ’n’ roll equivalent of taking time off during Christmas and New Year’s, and then sending all your co-workers an email announcing that your “2019 workplace comeback” will officially begin Jan. 2. Good to know, gents. Feel free to get in touch again when you actually do something.

4 Speaking of premature comebacks, The Warped Tour — which supposedly staged its last cross-country trek in the summer — is already hinting about some sort of new plans for this year, which will be its 25th anniversary. I think this should only be allowed if every single band that played on the original tour reunited and returns to recreate their original performances — while wearing their old outfits. Because it turns out punk’s still not dead! It just needs to stretch out its hamstrings before it goes onstage now!

5 One more comeback: The Raconteurs are apparently releasing a new single this week, in advance of a new album next year. Does anybody else get the feeling that Jack White has reached the stage where he’s basically willing to make an album with anybody who still responds to his emails and texts? I never thought I would say this, but it’s time for White to start a new band.