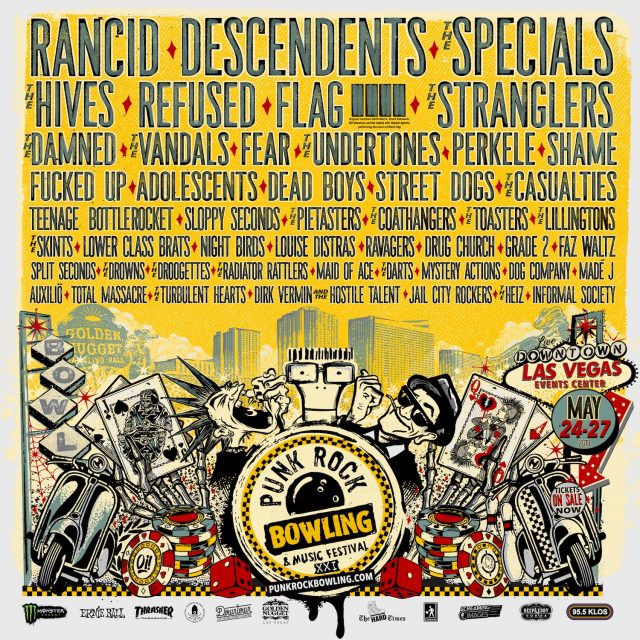 1 | This year’s Punk Rock Bowling Tournament in Las Vegas has an indisputably awesome lineup: Rancid, Descendents, The Specials, The Hives, Refused, Flag, The Stranglers, The Damned, The Vandals, FEAR, The Undertones, Fucked Up, Adolescents, Dead Boys, Street Dogs, The Casualties and a zillion more. That is great and all, but it makes me ask: Why doesn’t somebody do this in Canada? Granted, we don’t have Las Vegas. But we have bowling, gambling, back bacon, cheap booze, and legal weed. Surely that’s got to count for something.

2 | Weezer are adding another colour to their rainbow collection with the forthcoming Black Album. It follows Blue, Green, Red and White — and precedes Yellow, Orange and Purple, one can only assume. Well, I guess it beats coming up with actual titles — after all, how does one top Hurley and Raditude? Good luck with that! Anyway, to get you primed, they dropped a new reggae-pop ditty titled Zombie Bastards. You can check it out here:

3 | Ten days after collapsing backstage after performing Walk This Way with Billy Joel at Madison Square Garden, Aerosmith guitarist Joe Perry has cancelled his solo tour to take the rest of the year off. That sucks, but really, it’s about time Perry took five. Having talked to him several times over the years, I can tell you he’s one of those guys who never slows down — he talks a mile a minute, he’s always touring and recording and running around. So it must take something pretty serious to put him on the bench like this. Stay down, dude. We’ll be here when you feel better.

4 | How to tell when you’ve got too much money and not enough sense: According to TMZ, Drake had an armoured truck deliver $100,000 in cash to an Atlanta strip club so he and other rappers could make it rain money while celebrating his buddy Future‘s 35th birthday with the help of Lil Yachty, Jacquees and Pastor Troy. Apparently, the group consumed 30 bottles each of Hennessey and Don Julio before gunfire brought the affair to a close at about 3 a.m. So, in other words, a typical Tuesday night in the life of Drake. Remind me: What is he so conflicted about all the time again?

5 | A Perfect Circle — you know, the other band featuring Tool singer Maynard James Keenan that nobody really cares about — just covered AC/DC‘s Dog Eat Dog for a 7″ being released on Record Store Day. I’m not sure if this is good news or bad news, but at least they do a pretty respectful job of it. Here’s the track so you can judge for yourself:

6 | For those who prefer to watch live music played on the back of moving vehicles advertising various products, the Macy’s Thanksgiving Day Parade is back for another year. This year’s float-based performers will be a typical all-American lineup, including Martina McBride (on the Balsam Hill float, which includes a three-story Christmas tree), Sugarland (Ocean Spray), Carly Pearce (Green Giant), Kane Brown (South Dakota Department of Tourism), Tegan Marie (Girl Scouts of the USA), Kelly Clarkson, John Legend, Diana Ross, Barenaked Ladies and Ashley Tisdale, plus the Radio City Rockettes and the Broadway casts of Mean Girls, My Fair Lady, The Prom and Summer: The Donna Summer Musical. Watch it on NBC starting at 9 a.m. — preferably while riding on the back of a flatbed.