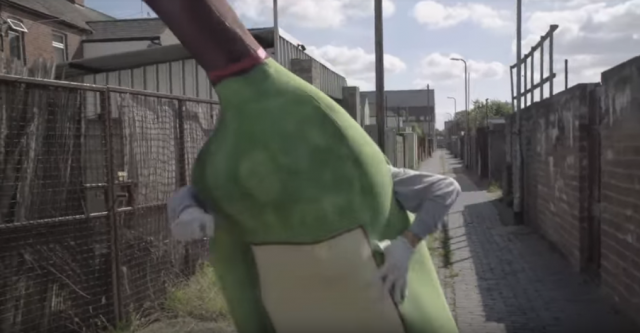 1 | If you only have time to watch video of a giant wine bottle chasing a cigarette butt hither and yon … well, it would have to be this bizarre clip from the new remix of Alexis Taylor‘s electronica gem Suspicious of Me. SEZ THE PRESS RELEASE: “Suspicious Of Me takes inspiration from some of his favourite hip-hop productions, whilst retaining the track’s unusual bounce built on its 3/4 to 4/4 cross-rhythms. The track is smoother than before, and its message clearer, but the funkiness remains.” Cut to the chase:

2 | Beloved Canadian troubadour Hawksley Workman gets back to nature and small-town life in the video for his warmly wistful acoustic number Battlefords. SEZ THE PRESS RELEASE: “Battlefords is a piece of Canadian nostalgia, celebrating life in rural Canada in the 1980s, and the emotion and innocence that was specific to a quasi-technological time in the late 20th century.” You can go home again:

3 | Do you want to know a secret? Well, it seems Washington state metal demons Fifth Angel have already shared two secrets. So now they’re unveiling their video for The Third Secret, the title cut from their first album in nearly three decades. SEZ THE PRESS RELEASE: “We feel this is a brilliant album, and the critics feel this is a brilliant album. But now is the time that the most important voice is heard, and that is the voice of the fans! We are excited to see how they will react!” Keep it like a … you know:

4 | Everybody likes the carnival. Including French-Canadian artist Munua — a.k.a producer, singer, songwriter and performer Josie Boivin. That’s where she’s headed in the dreamy slo-mo video for Hotel Delmano, from her recently released EP Delmano. SEZ THE PRESS RELEASE: “The song Hotel Delmano came to me in a dream. So when it was time to make the video, I wanted it to have the same feeling — an ambiguous collection of images, whose meaning is derived by the connection of the time and place.” Every one’s a winner:

5 | Looking for a dose of Swedish metal accompanied by psychedelic visuals? You’re in good hands: Visionary outfit Soilwork have just dropped a visualizer video for the brand new cut Full Moon Shoals, from their long awaited upcoming 11th studio album Verkligheten. SEZ THE PRESS RELEASE: “Verkligheten marks the band’s first in more than three years and also marks the first to feature Bastian Thusgaard on drums, who replaced Dirk Verbeuren in 2016.” Get your fill:

6 | Would you rather be a philosopher or a psychopath? Well, now you don’t have to choose: Energized Edmontonians Lutra Lutra cover both ends of the spectrum in the proggy boogie-rocker Psychopath & The Philosopher. SEZ THE PRESS RELEASE: “The feisty track weaves together references to dueling house cats, philosopher Slavoj Zizek and The Sound of Music. “A lot of my lyrics are written in the shower,” says frontman Garreth Burrows. “I never want to be too serious or melancholy because I’m not. There’s humour in everything, no matter how dark or sad.” Yuk it up:

7 | Melodies are dead! Long live Dead Melodies — the new disc from Wintersleep keyboardist Jon Samuel. He gets off to a lively start with the album’s propulsive title track, streaming now. SEZ THE PRESS RELEASE: “Samuel charges through Dead Melodies’ title track with carefree vigour, riding the song’s adrenalized motorik rhythm toward a joyous, anthemic chorus that wields its title as a badge of stubborn defiance rather than defeat.” Bring out the dead:

8 | Who wants to think when it’s sunny out? Not rootsy Halifax singer-songwriter Cameron Nickerson, whose shapeshifting new single is rightly titled Rainy Day Thinkin’. SEZ THE PRESS RELEASE: “Rainy Day Thinkin’ is a long, dark exploration of relationships and loss, and is described by the singer-songwriter as “a simple sad song with a glimpse of hope.” The track starts off with a slow, crooning crawl before exploding like a barreling freight train near the end.” Get out your thinkin’ umbrellas:

9 | You liked Lady Bird, I liked Lady Bird, everybody liked Lady Bird. But did you write a punchy, scrappy song called Jungle about the movie like Vancouver’s Hotel Mira did? No, you did not. SEZ THE PRESS RELEASE: “The truth is, more often than not, young love is a suicide mission that you aren’t ready for. Jungle is a big, messy, triumphant celebration of that. It is a salute to every broken teenage heart and to the tradition of music that I listened to that nursed me through those failed experiments at human connection.” This is the best version of themselves: