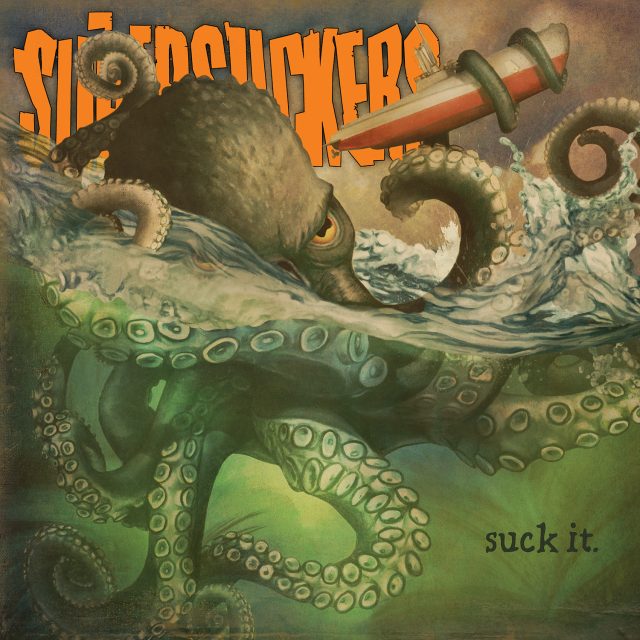 Well, cancer can definitely suck it. That may not be the literal meaning behind the title of Supersuckers’ 11th studio album, but it’s damn sure the message Eddie Spaghetti and his bandmates are sending with this 30th-anniversary release. On their last disc — 2015’s countrified Holdin’ the Bag — Spaghetti was still battling a nasty bout of throat cancer that left him tube-fed and unable to speak or even swallow for a time. So not surprisingly, some of his lyrics were a little more harrowing and personal than usual (though he still found time for lines like: “Let’s go all of you sissy-pants chicken-pickin’ / Finger-lickin’, mother-humpin’, dick-grabbin’, ass-lickin’ / Corn-fed, buttermilk, hand-spanked / Yellow-bellied lily-liver, sap-sucking son-of-bitches.”) But now that he’s apparently back at full strength, so are his evil rock ’n’ roll powers. The ’Suckers make that clear from the get-go on Suck It. After kicking off the festivities with a sample of Bill O’Reilly’s explosive, expletive-laced “We’ll do it live!” rant, Spaghetti and co. smack you upside the head with a lean, mean half-hour riff-rock throwdown. Lewd, crude, magnificently rude barnburners and bruisers dominate the proceedings — and titles like Breaking My Balls and What’s Up (With this Motherf—ing Thing?) should tell you everything you need to know. It isn’t all songs about liquor, women, drugs and killing, though. Spaghetti peppers the set with darkly twisted roots-rock fare like Dead Inside, The Worst Thing Ever and Cold Wet Wind. And even though his irascible spirit and pitch-black humour have recovered, his raspy pipes still bear some trace of his illness — on the heavier numbers, he has an extra layer of grit in his growl, sounding a little more like Lemmy or Billy Gibbons,which actually comes in handy on the album-closing cover of Beer Drinkers & Hell Raisers. That ZZ Top number is no accident. In fact, it’s a perfect choice. Because when it’s all said and done, Suck It isn’t about cheating death; it’s about celebrating life. Even — if not especially — on the song (I’m Gonna Choke Myself and Masturbate) ’Til I Die. Suck on that.