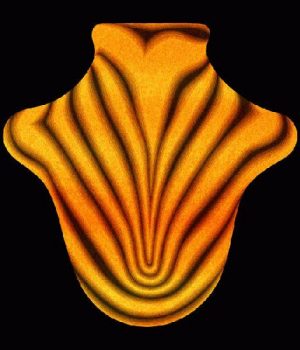 Some bands embody their names. Others contradict them. Big Red Machine clearly and deliberately fall into the latter group. With only two members, BRM are anything but big. They are hardly red, based on any emotional, psychological or political connotation with the colour. And while devices and electronics factor into their sound as much as any other band, their fiercely independent nature indelibly stamps them as anything but a commercial machine. Of course, this all makes more sense once you know the two moving parts of BRM: Iron & Wine‘s Justin Vernon and The National‘s Aaron Dessner. Their back story provides further illumination: The kindred spirits and restless explorers first joined forces in 2008 when Dessner sent Vernon an instrumental idea that evolved into a haunting cut — titled, yes, Big Red Machine — on the Dark Was the Night charity album. Why it took them a decade to expand on that beginning is something only they know. But you won’t care once you hear the self-titled fruits of their long-overdue labour. As you might expect from its creators’ respective pedigrees and practices, Big Red Machine (the album) is very much a creation of studio technology and programming, with plenty of twitchy drum loops and glitchy sonics supporting Dessner’s Frippian guitar tapestries and Vernon’s stream-of-consciousness poetry and outside-the-box vocal stylings. But it is also more than that. While undeniably concerned with texture and tone, the duo never let construct overshadow composition — at their heart, each of these cuts can stand on their own and function as a song. And pretty decent songs at that: Air Stryp is a noisy excursion; Hymnostic soars on clouds of gospel keyboard; Forest Green boasts a big swooping bass reminiscent of Lou Reed‘s Walk on the Wild Side; and I Won’t Run From It heads for the holler with its fingerpicked acoustic guitars. Ultimately, the whole affair proves to be a superior combination of man and machine that is more than the sum of its parts. Fingers crossed we don’t have to wait another decade for a new model.