I actually buy a lot of albums based solely on the cover art. The first time this happened was when I spotted a copy of The Pod by Ween in a Kingston record store. I’d never heard of them before but I actually laughed out loud at the cover, a parody of the iconic Leonard Cohen’s Greatest Hits. Funnier still is just how dissimilar the two records are.

The Pod cover is pretty low-tech, they actually made it using a copy of the Cohen album from Dean Ween’s mother’s collection. They simply stuck a photo of bassist Mean Ween’s head over Cohen’s and changed the graphics and text. In case you’re wondering, Mean Ween is wearing a nitrous-powered bong.

There are actually stacks and stacks of records with similar cover art — sometimes on purpose out of admiration, sometimes as a parody or a statement, and sometimes by accident. I’m going to go through some of my favourites and notable ones, but will leave out the ones by non-musical artists. Or stuff like The California Raisins, Sesame Street, The Simpsons, The Rutles and Weird Al.

It makes sense that one of the most oft-copied artists also happens to be one of the most oft-purchased artists: The Beatles. Pretty much all of their album covers have been parodied — even by The Beatles themselves. The original Get Back cover, later the cover of 1973’s two double 1962-1966 compilation, is a re-do of the photo from the cover of their debut Please Please Me. 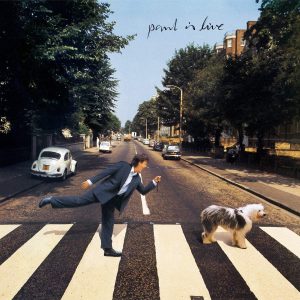 The cover of Paul McCartney’s Paul Is Live is a play on the Abbey Road sleeve, at the same famous “zebra crossing.” George Harrison’s Dark Horse album is pretty similar-looking to Sgt. Pepper’s Lonely Hearts Club Band. On the sleeve of John Lennon’s Imagine album he’s photographed holding a pig, similar to how McCartney is holding a ram on the cover of his 1971 album of the same name. 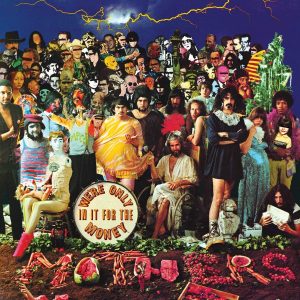 But there are a few iconic ones by other artists as well. There are a bunch of the aforementioned Sgt. Pepper (1967), but my personal favourite is the thoughtful insanity of 1968’s We’re Only In It For The Money by Frank Zappa & The Mothers Of Invention. Initially, the intended cover was forced into the gatefold by Verve out of fear of lawsuits from Capitol, who weren’t at all happy with it. Eventually, re-issues and remasters put the photo — what Zappa envisioned as a direct opposite of the Sgt. Pepper one — on the cover where it belongs. The Mothers’ album also had cut-outs, manufactured by the same printer who did Sgt. Pepper.

The Damned’s Black Album is a play on The Beatles’ White Album, in fact, later pressings even had a similar cover — except in black, with an embossed, slightly askew The DAMNED. Meet The Beatles!, the second American studio release — the first by Capitol Records — has several parodies. The record itself is kind of one. The Robert Freeman photo is the same one used on The Beatles’ second U.K. album With The Beatles, except with a bit of blue tint added. My personal favourite, though, is Meet The Residents! (for obvious reasons). But I also tip my hat to the cover of Genesis’ 12″ single Land Of Confusion, which has the faces of the British caricature puppets Spitting Image in a similar style. 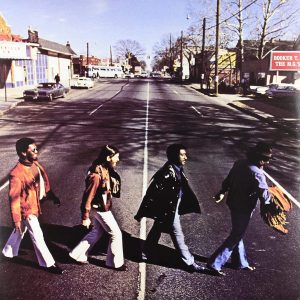 Apart from Paul Is Live, there are two mainstream parodies of the Abbey Road cover. One is McLemore Ave by Booker T and the M.G.’s. It shows the band crossing said avenue in Memphis, just up the road from 926 East McLemore Ave — Stax Studios. Just as The Beatles were crossing just outside EMI Studios. The Booker T album is also entirely comprised of Beatles cover songs. In a similar fashion as McLemore Ave, American jazz guitarist George Benson put out an album of Abbey Road covers called The Other Side Of Abbey Road. The front cover of the 1970 LP shows Benson, guitar in hand, crossing E 53rd Street in New York City. The other notable Abbey Road parody is an promotional EP by Red Hot Chili Peppers, who were photographed at the famous crossing wearing nothing more than socks on their peppers. 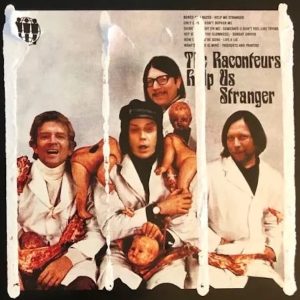 Finally, so very popular are The Beatles that even a rare cancelled album cover has parodies. The infamous “Butcher cover” of 1966’s Yesterday… and Today was eventually replaced by what’s known as the “trunk cover,” which shows the foursome sitting in and around an open storage trunk — rather than in white smocks covered in bloody meat and decapitated toy babies. Several of the original Butchers got issued, with several more issued with the new cover simply pasted on top of the old one. Collectors know how to spot them and try to carefully peel the paper back to reveal the valuable Butcher hidden underneath. The Raconteurs hid their own version of the Butcher cover underneath the collectable lenticular cover of their 2019 album Help Us Stranger. You have to risk damaging both covers in order to peel it back and reveal the parody.

Then there’s one which, like Booker T, is more of a tribute than a parody — London Calling by The Clash. While the photo is decidedly different, the text on the cover is very similar to the debut album by Elvis Presley. The original has the King playing an acoustic guitar with gusto, while The Clash’s version features bassist Paul Simonon is smashing an electric one with equal dedication.

Finally, we’ll wrap with what seems to be an accidental one — Eye In The Sky by Alan Parsons Project and Tell The Truth by Billy Squier. Both use the famous Egyptian symbol of the eye of Horus, a bird-headed Egyptian god. The former came out in 1982 and the latter in 1993. Tell The Truth was such a bomb that Squier left the biz for a few years. Quite the turn of events for a guy who had a huge hit with The Stroke and an album cover designed by Andy Warhol. Makes me glad my gf is a graphic designer and illustrator — though she did recently do a mock-up of my next record in the style of a no-name grocery item.