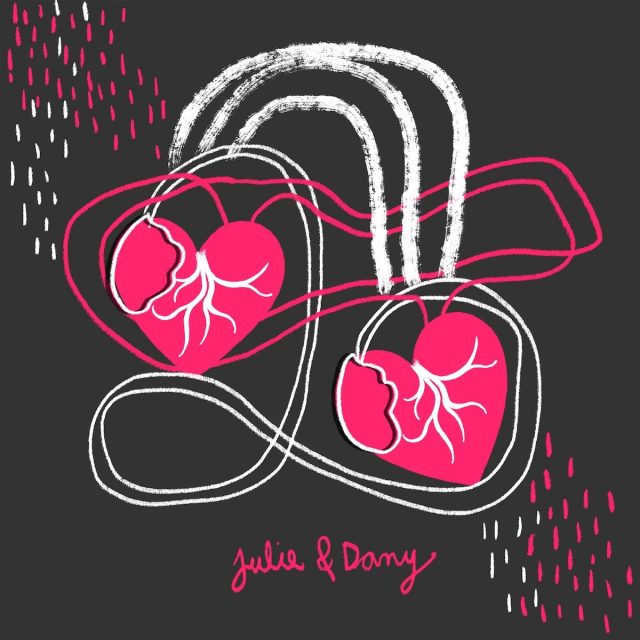 THE EDITED PRESS RELEASE: “Produced entirely in Julie & Dany’s home in Memramcook, N.B., their self-titled first album was written, composed, and recorded during the mandatory isolation between Quebec and its neighbouring province. These songs are born from the complicity that enlightens the couple’s everyday lives: They treasure the magic of tiny details, a pure existence stripped of pomp and extravagance.

While Dany cooks up a new riff in the kitchen, Julie soaks up the melody as she concocts lyrics while lying in the bathtub, taking a break from sowing tomato plants. There might not be any mayonnaise in the fridge, but love abounds in this songwriting process.

Before Julie & Dany, the two singer-songwriters built up formidable portfolios on their own. Julie Doiron began her career in the early ’90s as part of the rock group Eric’s Trip. The Moncton band quickly garnered interest in the indie rock scene and signed with the prestigious label Sub Pop. At the same time, she launched several solo EPs and a first album, Broken Girl, in 1996.

In 2007, Woke Myself Up was shortlisted for the Polaris Prize. In 2000, she won a Juno Award for her collaboration with Wooden Stars. This was the first in a long series of enriching music partnerships. Since then, she has written and produced alongside Mount Eerie, The Wrong Guys (Cancer Bats), Daniel Romano and now Dany.

Dany Placard has an impressive oeuvre of his own. After the breakup of Plywood 3/4 in the mid-2000s, Dany decided to pursue a solo career. In 2012, he signed with Simone Records, releasing songs like Démon Vert, Santa Maria, Full Face, J’Connais Rien À L’Astronomie, and J’Connais Rien À L’Astronomie (Suite), his latest (2021). Along with his solo work, he collaborated on an LP with Carl-Éric Hudon in 2007 and produced the work of many other artists: Chantale Archambault, Sara Dufour, Francis Faubert, Laura Sauvage and many more.

Julie & Dany is the union of two exceptional artists. Their collaboration embodies humility and authenticity.”