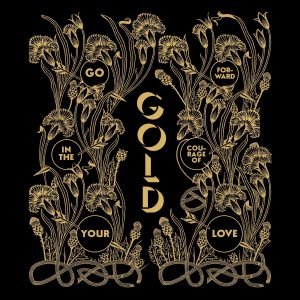 THE EDITED PRESS RELEASE: “Alabaster DePlume’s songs are built on sonorous circular melodies and luminous tones that transmit calmness and generosity in warm waves – unless they’re raging against complacency and the everyday inhumanity of end times capitalism. Most importantly, he brings a valuable transparency to his work. “This is what I’m really doing,” he says. “I want to talk about why I’m doing this, and how I’m doing this.” His double album Gold was recorded at London’s Total Refreshment Centre over two weeks. He invited a different set of musicians each day, playing the tunes to click so that DePlume, who also produced it, could cut the 17 hours of sessions together like a collage. As with all his sessions, he ensured that the musicians didn’t have enough time to rehearse the tunes, instead requiring them to tune into each other and to rely on each other to reach the end of a song. There was another rule: No listening back to sessions after recording. “The method is part of the mission. It wasn’t like school. We had mayhem. We were having fun. That is the story and the process — and I want to live that way.” 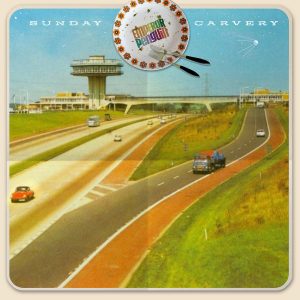 THE EDITED PRESS RELEASE: “Emperor Penguin’s new album Sunday Carvery is named for the band’s love of traditional British hospitality and the faded romance of the roadside diner. The songs were written and recorded during the 2020/21 COVID lockdown. Getting together to rehearse was difficult at that time due to pandemic restrictions, so home demos were made and shared with each other, with each band member adding bits, removing bits and changing bits until the songs gradually took shape, like little musical Frankenstein’s monsters. Since everyone makes lyrical and musical contributions to each song, they credit all compositions to the band, whoever it was that started the ball rolling. In summer 2021, producer Jamie McEvoy helped turn the rough demos into final tracks, overdubbing vocals and guitars and ending up with possibly their most polished set of songs yet. In keeping with their previous releases, the style of the songs is rooted in melodic pop with crunchy guitars. Is it “power pop”? Well, yes, but it also draws on influences as diverse as XTC, The Kinks, Teenage Fanclub and, er, Mungo Jerry and AC/DC.” 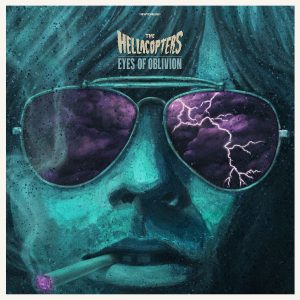 The Hellacopters
Eyes Of Oblivion

THE EDITED PRESS RELEASE: “Eyes Of Oblivion contains absolutely addictive tunes with all of the juicy riffs and in-your-face swagger you could’ve possibly hoped for, topped off with captivating hooks that won’t leave your head any time soon. Produced by Nicke Andersson & Chips Kisbye (who has overseen every Hellacopters album since High Visibility in the year 2000), it will be the Swedish rockers’ first full-length since the release of their temporary farewell record Head Off in 2008. After celebrating a triumphant return to stages all across the world in 2016, 2022 will now mark an exciting new chapter in the history of The Hellacopters, with an album that sums up what the band delivers like no other: soulful and energetic rock ’n’ roll The Hellacopters were formed in 1994 by Nicke Andersson (vocals and guitar), Andreas Tyrone “Dregen” Svensson (guitar), Kenny Håkansson (bass) and Robert Eriksson (drums). Andersson is renowned for his work in death metal band Entombed, while Dregen is known for his main band Backyard Babies. Together with The Hives, The Hellacopters are considered one of the most important and influential Swedish rock bands.” 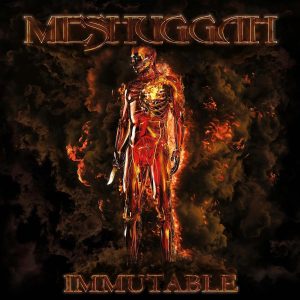 THE EDITED PRESS RELEASE: “Destined to be one of 2022’s most hailed and talked-about releases, Immutable once again showcases Meshuggah’s collective brilliance, including some of the most jaw-dropping ensemble performances they have ever executed. Six years on from the band’s most recent full-length, “The Violent Sleep Of Reason”, 2022 brings a fresh and fearsome revelation from Meshuggah. Shattering even the highest of expectations, the band’s ninth album is simply their wildest and most esoteric sonic adventure yet. For guitarist Mårten Hagström, the task of embarking on another unprecedented tech-metal odyssey was impossible to resist. “The title fits perfectly for where we are as a band,” Mårten concludes. “We’re older now. Most of us are in our fifties now, and we’ve settled into who we are. Even though we’ve been experimenting all along, I also think we’ve been the same since day one. The way we approach things and why we still make new albums, and why we still sound the way we do, it’s immutable. Humanity is immutable, too. We commit the same mistakes over and over. And we are immutable. We do what we do, and we don’t change.” 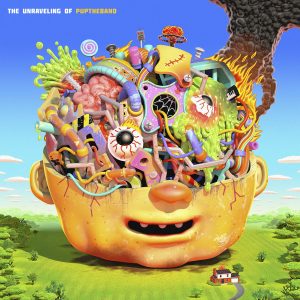 Pup
The Unraveling Of Puptheband

THE EDITED PRESS RELEASE: “Every Pup record arrives with an implied “contents under pressure” warning; the tension between the band’s instinct for the melodic and its gift for chaos propels the songs forward while making them also seem close to flying apart in a horrifying spray of tears and gore. To listen to Pup enough is to spend parts of every day mentally echoing some hilariously self-lacerating, utterly undeniable choruses; you will find yourself thinking “this is the mosh part” at moments when you would otherwise be tearing yourself apart. It is one thing to feel, as Babcock sings on The Unraveling Of Puptheband’s Totally Fine, “like I’m slowly dying/and if I’m being real I don’t even mind,” but it is another, very different thing to find yourself shouting along with those words. There’s a tension here, too. “There’s only so many times you can write a song about how much you hate yourself before you write a song about how fucking good you are at hating yourself,” Babcock says. “It’s funny that we’ve provided for ourselves by being fuck-ups and writing songs about being fuck-ups. We’ve been fuck-ups forever, and now we’ve got a responsibility, to others and to ourselves, to fuck up in a productive manner.” That’s not any easier than it sounds, but also the volatility is the thing; all that tension is always just barely held in place by the band’s craft. It couldn’t be anything but uneasy, but The Unraveling Of Puptheband is the sound of a band that is not just comfortable with but in command of that chaos.” 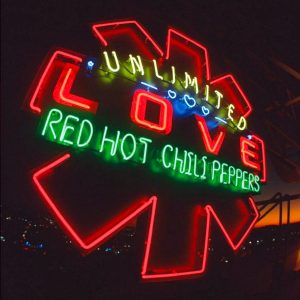 THE EDITED PRESS RELEASE: “Red Hot Chili Peppers’ 12th full-length offering Unlimited marks their first recording with guitarist John Frusciante since 2006 and first with producer and longtime collaborator Rick Rubin since 2011. “Our only goal is to get lost in the music. We (John, Anthony, Chad and Flea) spent thousands of hours, collectively and individually, honing our craft and showing up for one another, to make the best album we could. Our antennae attuned to the divine cosmos, we were just so damn grateful for the opportunity to be in a room together, and, once again, try to get better. Days, weeks and months spent listening to each other, composing, jamming freely, and arranging the fruit of those jams with great care and purpose. The sounds, rhythms, vibrations, words and melodies had us enrapt. We yearn to shine a light in the world, to uplift, connect, and bring people together. Each of the songs on our new album Unlimited Love, is a facet of us, reflecting our view of the universe. This is our life’s mission. We work, focus, and prepare, so that when the biggest wave comes, we are ready to ride it. The ocean has gifted us a mighty wave and this record is the ride that is the sum of our lives. Thank you for listening, we hope you enjoy it.” 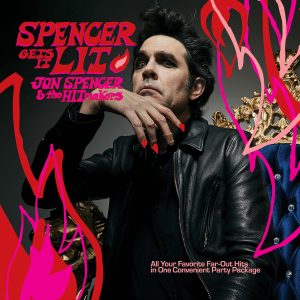 Jon Spencer & the HITmakers
Spencer Gets It Lit!

THE EDITED PRESS RELEASE: “The indelible Jon Spencer (Blues Explosion, Boss Hog, Pussy Galore, Heavy Trash, etc) is back with Jon Spencer & the HITmakers. Spencer Gets It Lit delivers friction, excitement, and post-modern depravity in a gonzo retaliation against idiocy that is as good a balm for our collective PTSD as any. Across layers of big beats, fuzz guitar, and fat synths he spits, croons, rhapsodises, and seduces. Spencer Gets It Lit is his most complex, groovy, and fun record in years; a dark and danceable odyssey — both a studied take-down of the early
21st century, and a celebration of the place where electricity meets the mind. Spencer Gets It Lit is classic Jon Spencer taken to the extremis — electro-boogie, constructivist art pop, a cocktail of industrial sleaze and futurist elegance. Says Spencer, “Send out the Hit Signal! This is the most uncompromising album I’ve ever made!” 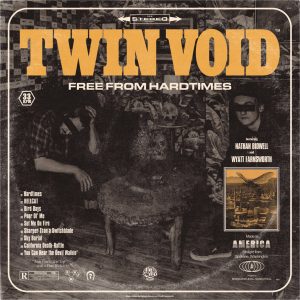 THE EDITED PRESS RELEASE: “The Pacific Northwest-based Twin Void is a formidable rock and roll machine that has steadily become credible contenders in the regional scene. The band features road-tested musicians, including frontman & founder Nathan Bidwell on vocals & guitar. The band plays with an energy and ferocity that has gained them the reputation as a must-see live act! They believe in what they do and continue to deliver memorable heavy music on their terms. Twin Void is just returning home from their recent U.S tour dates, including a mainstage performance on Judas Priest’s Warlando Fest in Florida. These determined heavyweights continue to write, record, and play select national dates as they work on the next batch of tunes.”