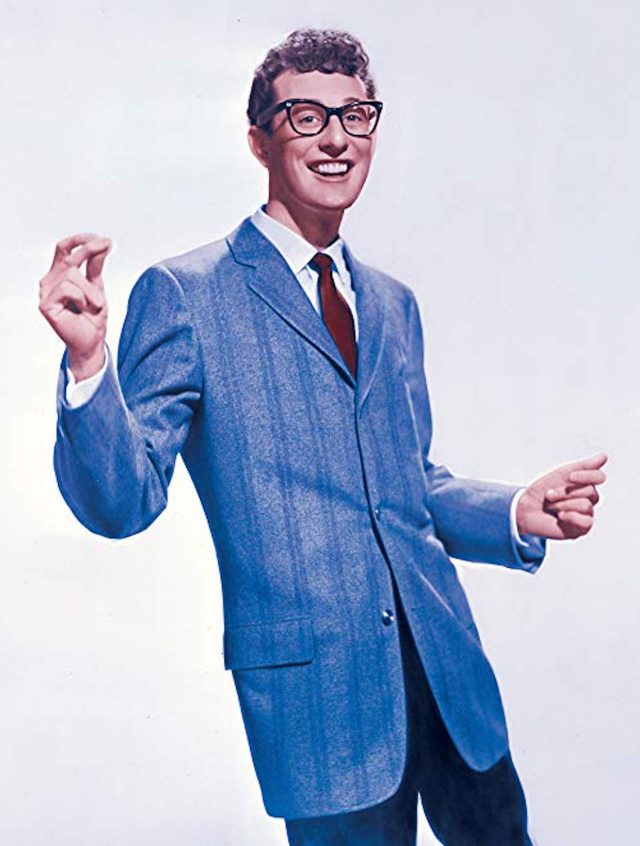 I am plenty old. But not quite old enough to have seen Buddy Holly perform. Or to remember the day he died. Thankfully, I am lucky enough to have known a few famous people who were around back then. So I spoke to them — along with a few other confirmed Holly fans and followers — for this brief feature that first ran on what would have been his 75th birthday in 2011. (I changed a couple of time and age references for clarity.)

If Feb. 3, 1959 was the day the music died, then Sept. 7, 1936 was when it all began. On this date, rock ’n’ roll pioneer Buddy Holly was born in Texas. Barely 22 years later, he died in the plane crash later immortalized in Don McLean’s song American Pie. But during the tragically brief window of his life, he put an indelible stamp on music.

“I hold Buddy Holly in the highest place,” enthuses Canadian music industry vet Bernie Finkelstein, a lifelong fan who saw Holly perform in 1958. “He was a touchstone for everything that came after. His music was so sophisticated and poignant. He set the bar so high that there was nobody else like him until The Beatles.”

“Buddy was definitely a pioneer,” agrees pop-rocker Patrick Stump of Fall Out Boy. “And he was one of the strongest practitioners of really well-written songs. They’re simple songs, but really hard to write. You could count on one hand the number of people who have written songs like that and made them work. And there’s something charismatic about his voice; it sounds like an old friend.”

Adds legendary singer-songwriter and producer Peter Asher, who covered Holly’s True Love Ways in 1965 in the duo Peter and Gordon: “He’s been an important part of my career for an embarrassing number of decades. There are two reasons he means something to me: One was that his songs were just so cool and catchy. The other was that he proved you could be a nerdy guy in glasses and still be a pop singer.”

Charles Hardin Holley seemed destined for a life in music. Born in Lubbock, Tex. and nicknamed Buddy, he learned guitar from his brothers, and won his first talent contest at five. At 13, he cut his first record. He started a duo in 1952, and by 1955, he was opening local shows for Elvis Presley and Bill Haley. Record labels came calling. He formed a new band — creating the template for today’s guitar-driven rock outfits — and hired Norman Petty as his manager. His first contract misspelled his last name. Buddy Holly and The Crickets were born.

Success came swiftly. His first hit, That’ll Be the Day, arrived in May 1957. Then came Peggy Sue, named for drummer Jerry Allison’s girlfriend. In December, they played The Ed Sullivan Show. The songs kept coming: Oh Boy, Maybe Baby, Rave On, It’s So Easy. Months after their first single, the band had made two albums, toured North America and even made Canadian stops in Toronto, Montreal, Vancouver, Calgary, Edmonton and Regina. In March 1958, they ventured to England, where 12-year-old Finkelstein saw them at Nottingham’s Odeon Theatre.

“It ruined my life!” jokes the founder of True North Records. “But it also made my life. I’d never seen a rock ’n’ roll show before, and it was phenomenal. I remember how energetic he seemed … he would go from side to side of the stage and sing into different mics. I don’t remember what he was wearing or any of the other acts, but I remember being totally excited.”

Back in the U.S., Holly settled in New York. In June, he met receptionist Maria Elena Santiago. He proposed on their first date. They married on Aug. 15. Holly wrote True Love Ways for his bride. Maria Elena joined him on the road, helping with everything from laundry to finances. But when Holly took a spot on a Winter Dance Party Tour of the Midwest with Ritchie Valens, The Big Bopper and others, she stayed home.

The tour was grueling. The bus broke down. The heater didn’t work. The musicians got frostbite. By the time they hit Clear Lake, Iowa, on Feb. 2, Holly was fed up. He chartered a plane to fly them to their gig in Moorhead, Minnesota. Holly bassist Waylon Jennings gave up his seat to an ill Big Bopper, joking: “I hope your ol’ plane crashes.” The words would come back to haunt him. Shortly after takeoff, the plane slammed into the ground at 170 mph, killing the three musicians and scattering debris over a farmer’s field. Errors by the inexperienced pilot were blamed.

Like many fans, rocker Randy Bachman remembers the day vividly. But for him it’s personal. “We were skipping school and driving down to see him play in Moorhead,” recalls the former Winnipegger, who owns and treasures an old mixing board Holly used. “We were almost at the border and the radio was playing all Buddy Holly. We thought, ‘This is great.’ Then the DJ came on and said the plane crashed. We pulled over and cried, then turned around and drove home.”

Buddy is gone, but the music never dies. Nor the legacy. They have lived on in myriad ways: In the tributes from Eddie Cochran, Bachman and Don McLean. In countless covers by everyone from The Rolling Stones to Peter and Gordon. In the way he influenced artists from The Beatles (Paul McCartney now owns most of Holly’s songs) to Bob Dylan (who saw his penultimate show in Duluth) to Bruce Springsteen. Weezer titled a song for Holly. Gary Busey played him in a biopic. His story has been turned into books and musicals.

Maria Elena remains integral to the story. Though she remarried and raised a family, she continues to keep Holly’s flame alive while safeguarding his name and likeness. In 2011, she and Asher celebrated his life and music in Los Angeles. Buddy finally got a star on the Hollywood Walk of Fame, right in front of the Capitol Records tower. Then he was honoured with a star-studded concert to coincide with the release of a tribute album titled Listen to Me: Buddy Holly.

More than half a century after he died, it’s safe to say Holly and his music will not fade away anytime soon. 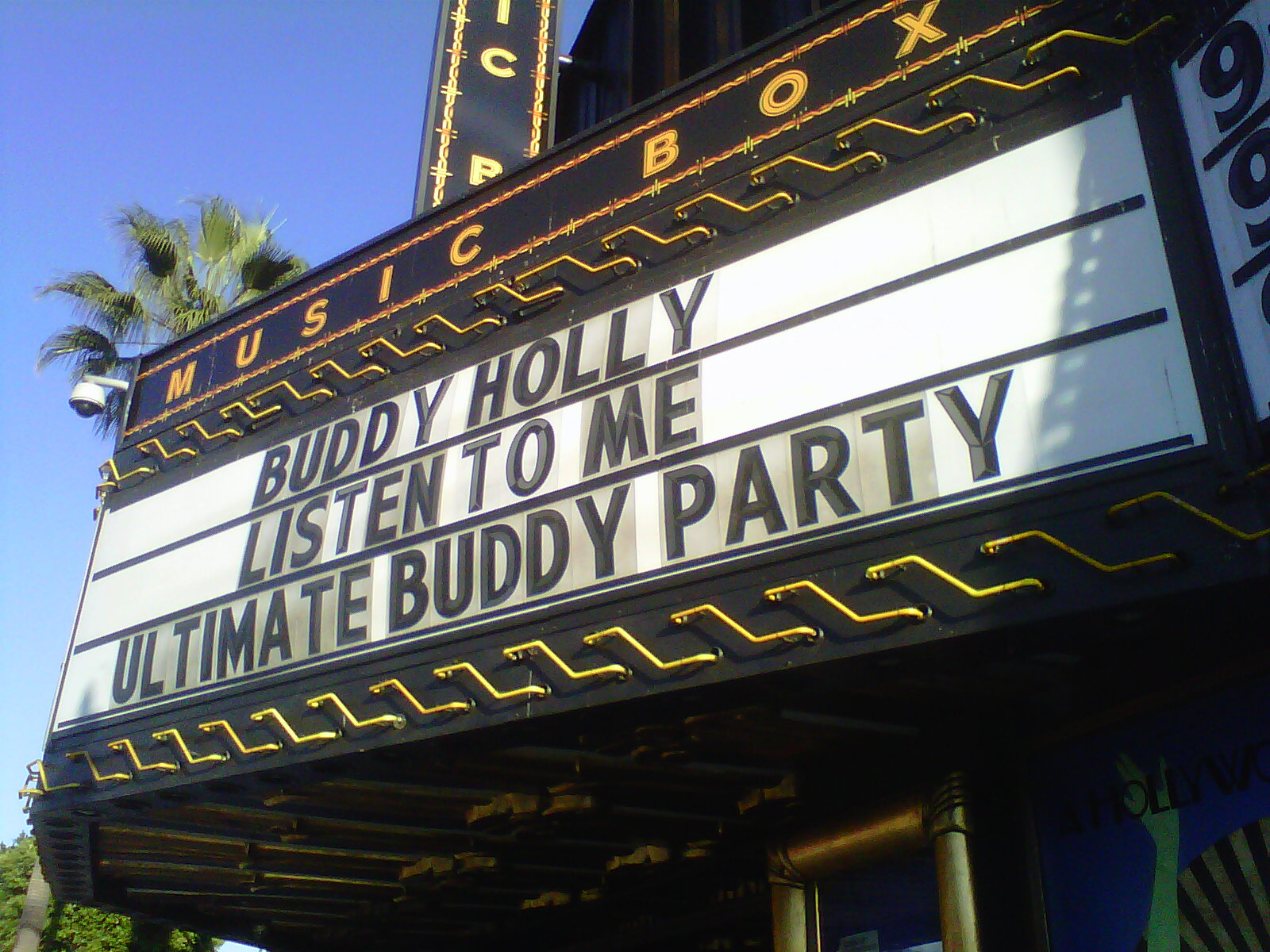