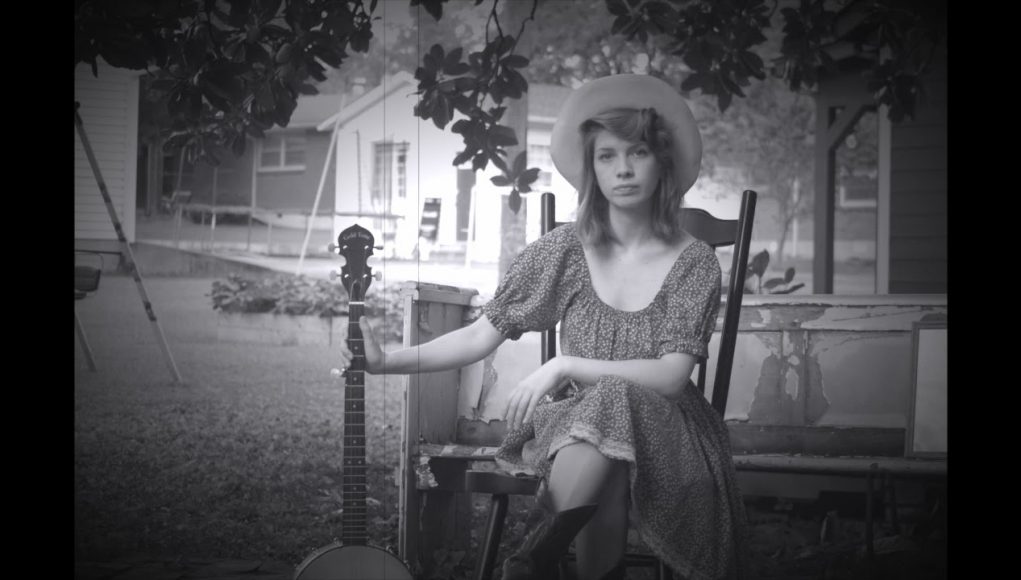 Angela Autumn travels light, Dakar take it too far, Ryanhood catches some shade, Andrea Nixon has peripheral vision — and you gotta respect the sheer balls-out audacity of a band that has the stones to hawk their new gospel single on Good Friday. They’re definitely the classiest act in today’s Weekend Roundup. Hail Satan!

THE EDITED PRESS RELEASE: “The eighth title in the intimate outdoor performance singer/songwriter series The Magnolia Sessions features Nashville folk artist Angela Autumn. She reveals, “We recorded The Magnolia Sessions last autumn after a year of full-blown heartache and grief. The proverbial harvest from those thin times were these very songs, which are as close to me as the flesh on my ribs. Most of them were written in North Carolina, Pennsylvania, and Nashville … and under that Magnolia tree, I turned my voice and heart towards the cicadas, in what felt like a final act of birth.”

THE EDITED PRESS RELEASE: “Alt-rock outfit Dakar’s new EP includes the song Over The Line. Singer-guitarist David Benfield stated: “With Over the Line we wanted to record an unabashed warning about what happens when corporate stooges are given the keys to the castle. If you follow the trends we’re seeing around the world to their logical conclusion, it ends in police states; plutocracies, oligarchies.”

THE EDITED PRESS RELEASE: “Award-winning Tucson acoustic duo Ryanhood — Ryan David Green and Cameron Hood — have released Under The Leaves, the title track from their upcoming album out on April 16. Lyrically, the song was inspired by the Wendell Berry poem Manifesto: The Mad Farmer Liberation Front, where he writes: “Ask the questions that have no answers / Invest in the millennium / Plant sequoias / Say that your main crop is the forest that you did not plant, that you will not live to harvest … ” Says Hood: “In the face of everything fast and new, Berry is talking about cultivating deep, slow roots—something seemingly missing from our modern lives.”

THE EDITED PRESS RELEASE: “Since releasing her debut album in 2017, Edmonton singer/songwriter Andrea Nixon has grown into a powerful voice within the Canadian country scene, mainly by sticking to her roots while expanding her craft. Her new single Outskirts might be her most accessible work yet but doesn’t compromise her artistic identity. Andrea continues to make significant creative strides with a song that’s at once thoroughly modern, yet based in classic country themes accentuated by Andrea’s pure, soaring vocal performance. She says: “This song explores the distance between two people, set against the backdrop of broken down love and the chill left behind.”

THE EDITED PRESS RELEASE: “Euphoric Ouroboric is the new album from David Wax Museum. Juniper Jones, a playful and upbeat song with a big catchy chorus, bursts at its sonic seams, complete with the band’s signature Mexican instruments. “I was thinking of all those bands I knew from our early days in Boston, particularly when there would be one member shining effervescently in a band, and you just knew that band couldn’t contain her and that she was destined for something bigger,” explains David Wax. “I wanted to sing to Juniper, listen in on the questions of doubt in her head, and encourage her to break out on her own. Any of us can get in a rut and lose confidence as we’re setting out on a new course, and I wanted this song to be for all of us who have a little bit of Juniper Jones inside, knowing that we can’t sit back and wait for things to happen.”

THE EDITED PRESS RELEASE: “Brighton singer-songwriter and producer Kim Jarvis (of Gaffa Tape Sandy) has released his debut single Satellites. It’s an indie-pop dance anthem driven by a simplistic mechanical beat, funky guitars, and relentlessly playful vocals. The verses submerge the listener in a world of groove, until the chorus takes hold and you find yourself head banging your way to a whiplash injury.”

THE EDITED PRESS RELEASE: “Hidden is the new single and video from actress/singer-songwriter Talia Jackson. Her empowering music discusses important themes such as embracing her identity as a biracial woman, overcoming mental health issues and not allowing external influences to dictate who she is at her core. Her single Hidden is a pop banger featuring soaring vocals, infectious harmonies and nu disco beats. Talia uses music as a therapeutic outlet to help her through the past and present adversities she faces, especially navigating her personal mental health struggles and she hopes others will find solace in it as well.”

THE EDITED PRESS RELEASE: “The new album from Reverend Peyton’s Big Damn Band was written by candlelight and then recorded using the best technology available … in the 1950s. But listeners won’t find another album as relevant, electrifying and timely as Dance Songs for Hard Times. Due April 9, it conveys the hopes and fears of pandemic living. “This song goes out to anyone that drives or has ever driven a POS car,” says Peyton. “Of all of the songs on the record, this one probably has the most “rural” subject matter, but it’s the most complicated in its vocal layers, and in my mind I wanted to layer it like a Stax records song from the ’60s.”

THE EDITED PRESS RELEASE: “After years of playing and touring with different bands and artists, Yukkon decided to begin releasing music on his own. The music has earned comparison to Coast Modern, Glass Animals, Vacationer and Magic City Hippies. Been A Long Time represents a shift into the hybrid organic/electronic realm, taking elements from Afropop, psychedelia and tropical West Coast grooves. Says Yukkon: “I attempt to make every song feel like a journey. I’m a huge advocate for getting outdoors and exploring as much as possible. I love camping, skating, road-tripping, and getting in touch with nature. Been A Long Time is a song that paints a picture of coming-of-age, self-discovery in the most imaginative sense.”

THE EDITED PRESS RELEASE: “With its themes of memory and the losses created by suburbanization and rural dislocation, Zoe & Cloyd’s Chestnut Mountain is a moving tale that’s all the more compelling for being based on John Cloyd Miller’s family history. “Chestnut Mountain is a song I wrote about our family homeplace in Wilkes County, NC,” says Miller. “My late grandfather, bluegrass fiddler Jim Shumate, was born there in 1921. There is so much history on that mountain. When I was young, the whole area was relatively remote and undeveloped aside from a few almost impassable roads. Later, a developer came in and tried to get my grandparents to sell their part, but to no avail. To my grandparents, that land was priceless. I’m so thankful that they held out and that my cousins and I have this place to share with the next generation.”

THE EDITED PRESS RELEASE: “Singer and fiddler Carley Arrowood returns to form with a strong vocal performance on My Kind Of Night Life. The song gently contrasts crowded downtown streets and “cafes and honky tonks full of sound and light” with the glow of lightning bugs “dancing in the air” and “the call of the nightbirds.” “That’s my kind of night life,” Arrowood sings with a self-assurance born of her own experience and preferences, while the song’s relaxed tempo, lush harmonies and subtle instrumental backing all combine to transport the listener to the chorus’s front porch swing and an idyllic night in the country.”

57 | The Grascals | Traveling The Highway Home

THE EDITED PRESS RELEASE: “The Grascals are back with a nod to the hardest of their hard-core bluegrass roots. Featuring a rousing, joyous lead vocal from guitarist Chris Davis and an equally robust harmony from John Bryan (guitar), Traveling The Highway Home reaches back not only to iconic bluegrass from the 1970s, but back to country music’s golden era. “I’ve always loved Ralph Stanley’s gospel music,” Davis says. “And Traveling The Highway Home always stood out the most as a favorite of mine. The vocals soaring above their hard-driving bluegrass style was one of the highlights of their music.”

THE EDITED PRESS RELEASE: “There’s no doubt that the coronavirus pandemic has challenged every artist, but Amanda Anne Platt and her band The Honeycutters are probably one of the few inspired to work on a project at once more sweeping and more intimate than anything they’d done — a concept built from songs recorded under quarantine and envisioned as a “deconstructed album,” released in a monthly series of singles.”

THE EDITED PRESS RELEASE: “Not A Soldier is the newest single by 16-year-old music phenom Willa Amai. She continues to blaze a trail in her message of hope and love in a world of change and uncertainty with her hauntingly soul-filled pop vocals on Not A Soldier. says Amai: “This song is for anyone who has had to come to the acceptance that love is, for better or for worse, out of our control. But I think more than that it’s a reminder that this lack of control is what makes love so worthwhile.”

THE EDITED PRESS RELEASE: “Los Angeles’ kidgloves (aka Cody Aledia) is an up-and-coming songwriter and producer. Today he releases his fourth single Just Friends. Says Cody: “Just Friends is a song about being brutally friend-zoned by an ex. Itʼs about having to reinvent a relationship with someone that you used to be intimate with. ‘Poor soul it takes some time to get over yourself’ is a tip of the old hat to the cliche your close friends may tell you when youʼre dealing with both the heartbreak warfare and what you need to admit in order to get over your own pity and move on. Itʼs sort of an anthem to say ‘wake the f*ck up, itʼs over.’ :)”