Home Read David Bowie | Something In The Air (Live Paris 99) 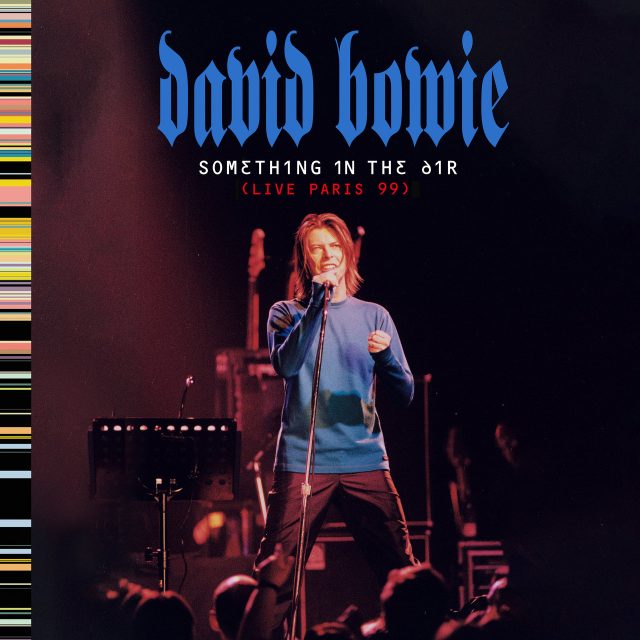 Another month, another previously unreleased David Bowie live album. As the subtitle of Something In The Air makes clear, this one comes from Paris in 1999, during a brief tour for his underwhelming (though arguably under-rated) ‘hours…’ album. That LP contributes five songs to the 15-song set list, including the midtempo title cut and Thursday’s Child, along with the slighted edgier The Pretty Things Are Going To Hell. Far more importantly, it’s rounded out by energized versions of multiple killer classics, from his long-forgotten 1966 debut single Can’t Help Thinking About Me to essentials like Life On Mars, Rebel Rebel, Changes, Drive-In Saturday and China Girl. All of which is well and good — but given that the show was clearly filmed (as you can see in the Drive-In Saturday video below), why not just release the damn thing as a CD/Blu-Ray combo and be done with it?

THE PRESS RELEASE: “Parlophone Records is proud to announce the third in a series of three digital David Bowie live releases from the ’90s. The previously unreleased David Bowie live album, Something In The Air (Live Paris 99), recorded live at the Elysée Montmartre on 14th October, 1999, is available to stream. Something In The Air (Live Paris 99) is a 15-track album, featuring 12 previously unreleased recordings and three tracks used as B-sides for singles from the ‘hours…’ album. The day of the show was a momentous one for Bowie, as that afternoon he was awarded the Commandeurs of the Ordre des Arts et des Lettres, the highest artistic honour that France can bestow. The Elysée Montmartre performance was one of only seven full shows performed during the promotion of the ‘hours…’ album. For this special limited run of gigs Bowie dug deep into his back catalogue, making these shows particularly memorable. Standout tracks include Can’t Help Thinking About Me, first released in 1966 and not performed live in over 30 years; Word On A Wing from Station To Station, reinstated into the set after an absence of 23 years. Drive-In Saturday had not been performed since 1974, and ‘hours…’ track Something In The Air made its live debut at this show. Something In The Air (Live Paris 99) was recorded live at the Elysée Montmartre, mixed by Mark Plati, and features Page Hamilton (guitar), Gail Ann Dorsey (bass, vocals), Mark Plati (guitar), Sterling Campbell (drums), Mike Garson (piano, keyboards, synthesisers) and Emm Gryner and Holly Palmer (backing vocals).”