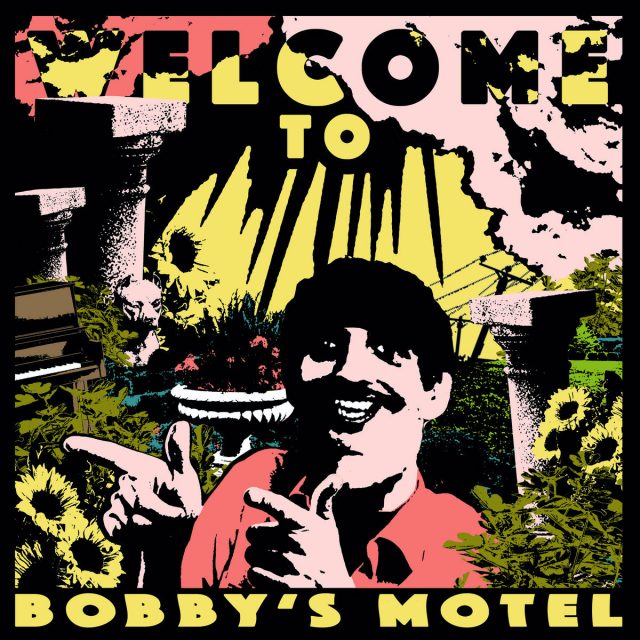 I have stayed in more than my share of motels over the decades. And far as I can tell, one roadside inn is pretty much the same as the next, from the paper-banded toilet seat and mass-produced art to the clunking, dented ice machine and insanely overchlorinated pool. The exception that proves the rule? Bobby’s Motel, the debut album from Montreal quintet Pottery. It’s not some cheap flophouse where you pay extra for the pillows and have to lodge a chair under the doorknob to feel safe. Instead, it’s a boutique crash pad. The kind of place where punks and freaks and bohemians and funky cats all hang out in the bar and take turns spinning Devo, Talking Heads, Gang of Four and LCD Soundsystem on the jukebox. The kind of place that has a 24-hour liquor store and pizzeria right next door. And the kind of place where you fill up the bathtub with ice and beer, knock on the adjoining doors and get friendly with your neighbours — and if management comes down the hall, it’s only to join the party. Check in and make yourself at home.

THE PRESS RELEASE: “Who is “Bobby,” you ask? Enter Pottery. Enter Paul Jacobs, Jacob Shepansky, Austin Boylan, Tom Gould, and Peter Baylis. Enter the smells, the cigarettes, the noise, their van Mary, their friend Luke, toilet drawings, Northern California, Beatles accents, Taco Bell, the Great Plains, and hot dogs. Enter love and hate, angst and happiness, and everything in between. Beginning as an inside joke between the band members, Bobby and his “motel” have grown into so much more. They’ve become the all-encompassing alt-reality that the band built themselves, for everyone else. So, in essence, Bobby is Pottery and his motel is wherever they are. But really, Bobby is a pilot, a lumberjack, a stay at home dad, and a disco dancer that never rips his pants. He’s a punching bag filled with comic relief. He laughs in the face of day-to-day ambiguity, as worrying isn’t worth it to Bobby. There’s a piece of him in everyone, there to remind us that things are probably going to work out, maybe. He’s you. He’s him. He’s her. He’s them. Bobby is always there, painted in the corner, urging you to relax and forget about your useless worries. And his motel? Well, the motel is life. It might not be clean, and the curtains might not shut all the way. The air conditioner might be broken, and the floors might be stained. But that’s okay, because you don’t go to Bobby’s Motel for the glamour and a good night’s sleep, the minibar, or the full-service sauna. You go to Bobby’s Motel to feel, to escape, to remember, to distract. You go for the late nights and early mornings, good times and the bad. You might spend your entire life looking for Bobby’s Motel and just when you think you will never find it, you realize you’ve been there all along. It’s filthy and amazing and you dance, and you love it. The 11 songs on Welcome to Bobby’s Motel don’t just invite you to move your body; they command you to. Fusing reckless, manic energy with painstaking precision, the record is part post-punk, part art-pop, and part dance floor acid trip, hinting at everything from Devo to Gang of Four as it boldly careens through genres and decades. The music is driven by explosive drums and off-kilter guitar riffs that drill themselves into your brain, accented with deep, funky grooves and rousing gang vocals. The production is similarly raw and wild, suggesting an air of anarchy that belies the music’s careful architecture and meticulous construction. The result is an album full of ambitious, complex performances that exude joy and mayhem in equal measure, a collection that’s alternately virtuosic, chaotic, and pure fun.”