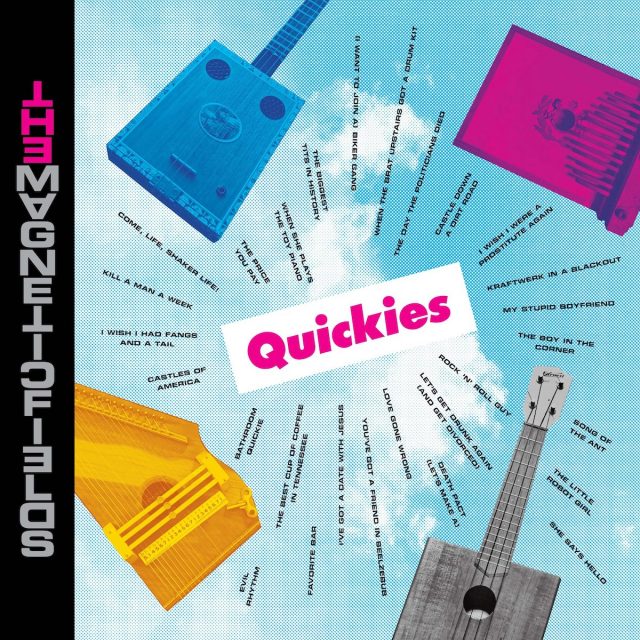 This one actually dropped digitally last week, but because the physical release was delayed, it slipped past me. But take my word for it: You won’t regret doubling back to hear wickedly waggish indie-pop wit Stephin Merritt’s latest entertainingly high-concept piece: A set of 28 short, sharply barbed cuts about stupid boyfriends, bathroom quickies, biker gangs, rock ’n’ roll guys, castles, devils, ants, dead politicians and the biggest tits in history — among other topics. Sometimes less really is more.

THE PRESS RELEASE: “The Magnetic Fields’ Quickies features 28 new short songs by Stephin Merritt, ranging in length from 13 seconds to 2:35. Merritt explains his thinking behind the Quickies concept: “I’ve been reading a lot of very short fiction, and I enjoyed writing 101 Two-Letter Words, the poetry book about the shortest words you can use in Scrabble. And I’ve been listening to a lot of French baroque harpsichord music. Harpsichord doesn’t lend itself to languor. So I’ve been thinking about one instrument at a time, playing for about a minute or so and then stopping, and I’ve been thinking of narratives that are only a few lines long. Also, I had been using a lot of small notebooks, so when I reach the bottom of the page, I’ve only gone a short way. Now that I’m working on a different album, I’m enforcing a large notebook rule so that I don’t do Quickies twice in a row.” Quickies features Merritt and other Magnetic Fields band members Sam Davol, Claudia Gonson, Shirley Simms, and John Woo. They are joined by longtime friends and collaborators Chris Ewen, Daniel Handler, and Pinky Weitzman.”