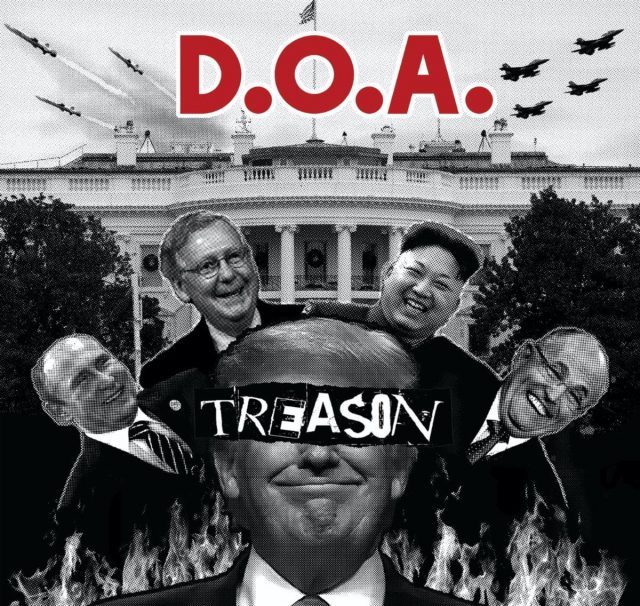 I have said it before. I am saying it again. If there’s any musician in this country who has earned the Order of Canada, it’s D.O.A.’s fearless leader Joey Shithead Keithley. He is literally one of punk rock’s pioneers. He’s been a tireless international ambassador for Canada since the ’70s. He’s campaigned and fundraised for countless causes. He’s even on the damn city council of Burnaby, fer cryin’ out loud. Bottom line: If he didn’t play punk rock, went by a different stage name and was willing to line a few politicians’ pockets, he’d have a pin on his lapel by now. And let’s be frank: He wouldn’t be the first shithead in that club. So if there’s anybody out there who wants to start a campaign, count me in. And this might be a good year to do it, since Joe and his latest lineup just announced they’re releasing their 18th album Treason on March 15. Says the press release: “Joey Shithead Keithley, Canada’s Godfather of Punk, has been getting sick of the dismaying news coming out of world capitals like Washington, Moscow, Beijing, Tehran, Pyongyang etc., so he decided to come up with D.O.A.‘s musical reaction to this crap and stand up against corruption, warmongering, racism, sexism and global warming … On Treason, D.O.A pulls no punches and nor should they. What you get is an uncontrollable punk rock riot that seems to breathe fire, the way punk was meant to be.” Also announcing new albums today: The Dream Syndicate, Shabazz Palaces, Jaga Jazzist, Car Seat Headrest and more. Scroll down to see all the release dates and scoot over to the Upcoming Releases page for all the action.

Everything is Recorded | Friday Forever

The Dream Syndicate | The Universe Inside

Jaga Jazzist | Pyramid
On Sight | Cause of Pain