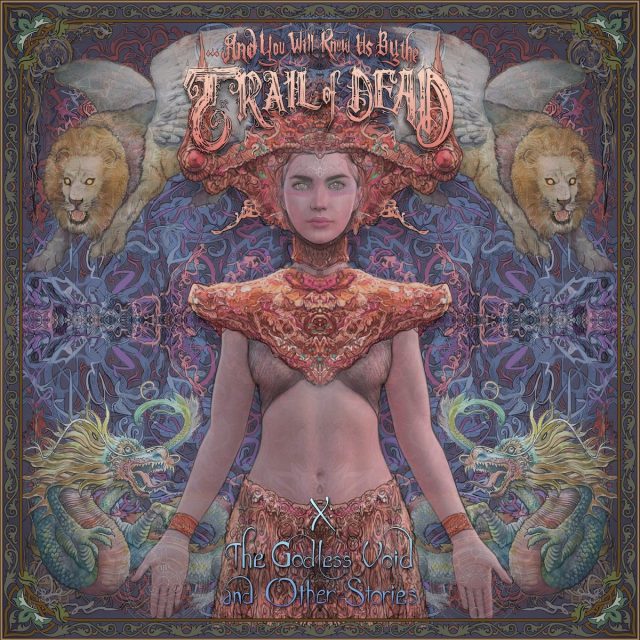 “Five years on from the release of their previous record, Austin’s beloved art-rock heroes …And You Will Know Us By The Trail Of Dead return with their tenth album – X: The Godless Void and Other Stories. Expansive yet concise, this album nods to the band’s traditional touchstones – the feral scree of Sonic Youth, Rush’s symphonic anthems, the textured bliss of My Bloody Valentine – while morphing effortlessly into newer forms. Work on X: The Godless Void and Other Stories began in earnest in 2018, after Keely returned to the band’s hometown of Austin following five years in Cambodia. With a new line-up having recently toured the 20th anniversary of their Madonna album, they’ve also reverted to the live format of their earlier years, with Reece and Keely alternating between drums and frontman duties – a musical partnership that dates back to their high school days. Appropriately, it all feels fresh.”

Some say rock ’n’ roll is a youngster’s game. I can dig that (especially at my rapidly advancing state of decrepitude). But these days I’m more inclined to believe that there’s an excellent exception to every rule. And here’s a doozy: This long-overdue comeback disc from the Austin’s trippiest, weirdest, artsiest and most intensely subversive noisemakers since Butthole Surfers roamed and terrorized the land and society’s tender earholes (it’s no accident that their first album was delivered to the jibbering masses via BH drummer King Coffey‘s Trance Syndicate label). Some two decades after I first watched them methodically reduce their gear to a field of rubble during a majestically frenzied SXSW set, the current incarnation of the grandiosely overnamed …And You Will Know Us By the Trail of Dead still can (and most definitely do) deliver a helluva mighty sonic wallop with the amp-melting intensity of their audio bamalama. Though it must also be said — and herein lies the crucial nubbin of my anti-ageist thesis, boys and girls — that the musical skills, compositional arsenals and emotional palettes of core duo of Jason Reece and Conrad Keely have clearly evolved considerably over the years, enabling them to bring new layers and levels of sophistication and substance to the supersonic squall of these dozen aural installations. So, here’s the golden ticket: If you’re an old coot like me who loved them back in the day, you will be most glad to renew their acquaintance. If you’re a youngster looking for an introduction, however, well this is as good a place as any. Tell ’em grandpa sent you.