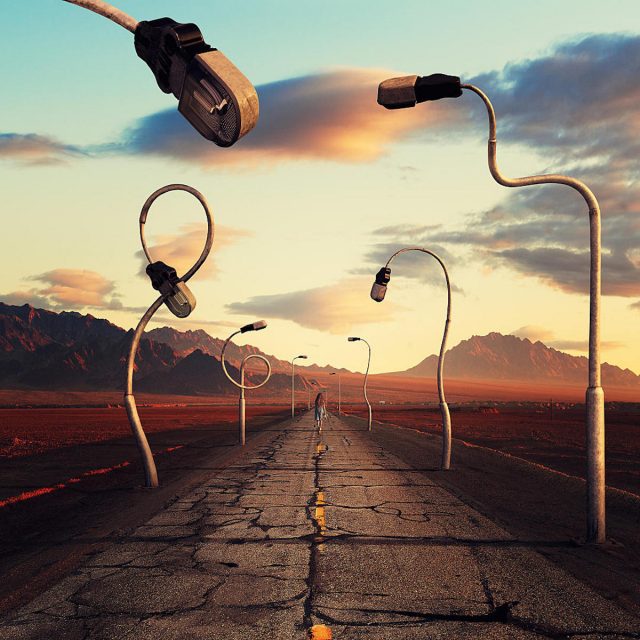 “You have to get into the right mood to listen to this,” admits David Gilmour. “There are lots of people who still love to listen to music that way — listen to a whole thing, a whole piece all the way through and get really into the mood of the whole thing rather than listening to shorter pieces. This is for them, really.”

No, I didn’t interview Pink Floyd’s singer-guitarist about their new box set The Later Years 1987-2019 (I was told neither he nor drummer and usual spokesman Nick Mason were doing any press for this set; read into that what you will). Gilmour’s quotes come from a video EPK interview included in the box — and he’s actually discussing Floyd’s 2014 comeback album Endless River. But he could just as easily be talking about this massive archival offering.

Following in the footsteps of the exhaustive 2016 box The Early Years 1965–1972, The Later Years 1987-2019 is yet another absurdly comprehensive act of musical archeology: A 16-disc audio/video compilation of the Gilmour-fronted band’s output after the acrimonious departure of founding singer-bassist Roger Waters in the wake of their tellingly titled 1983 studio album The Final Cut. Containing nearly 20 hours of content, it includes their three studio albums (1987’s A Momentary Lapse of Reason, 1994’s The Division Bell and 2014’s The Endless River) and two live albums (1988’s Delicate Sound of Thunder and 1995’s Pulse) in various formats, along with previously unreleased audio tracks and rarities, complete concert videos from Venice and Knebworth, tons of documentaries and assorted video footage, a pair of vinyl singles and an array of books, posters and memorabilia, all encased in a gorgeous clamshell box. (See below for a more detailed list.)

Sounds awesome, right? Well, sure. But like any box set this vast and extensive, it has its pros and cons. After spending a couple of days with the box — thanks to the fine folks at Sony Music Canada — I’ve found plenty of reasons to buy it, along with a few reasons to pass. Here’s the point/counterpoint:

REASONS TO BUY IT

The Updated Momentary Lapse of Reason
Initially unsure of whether he was making a Pink Floyd album or his next solo release, Gilmour cut most of this material on his houseboat studio with session players. Mason and keyboardist Richard Wright (who had been fired from the band during the making of The Wall) eventually came on board, but their contributions were minimal, since most of the recording was done and both men were reportedly out of practice. This version attempts to “restore the creative balance between the three Pink Floyd members” by having Mason replace Jim Keltner and Carmine Appice’s drum tracks with his own understated backbeats and thundering tom-tom fills. More crucially perhaps, it puts Wright more fully back into the picture by replacing other players’ parts with his own (some reportedly lifted from live recordings). It doesn’t necessarily make this a better album sonically or creatively — I’m inclined to agree with Waters, who dismissed the disc as a “forgery” of third-rate vocals and poor songwriting — but it does help legitimize Momentary Lapse of Reason as an authentic Floyd album.

The Audio Rarities
The fourth CD in the set features seven studio outtakes from the 1994 Division Bell sessions. Most are self-explanatory instrumentals and jams with titles like Blues 1, Slippery Guitar and Rick’s Theme, but there’s also the crunching mid-tempo rocker Nervana, the smouldering David’s Blues (featuring some wordless vocalizing from Gilmour), and an early version of Division Bell‘s High Hopes. This disc also has five live tracks from 1987 and 1994 that were previously released as single B-sides, including a potent version of the classic Astronomy Domine.

The Live Sonic Upgrades
The four main live concerts — 1989’s Delicate Sound of Thunder, 1995’s Pulse, 1989’s Live in Venice and 1990’s Live at Knebworth — were recorded and released a generation ago. Remastering and remixing them with current technology is simply a no-brainer. Along with that, several cuts on the Delicate Sound of Thunder CDs have been reconfigured, with longer guitar solos, more keyboards and other elements. The only surprise is that they didn’t include a Dolby Atmos mix. I guess they have to have something to include in the next generation of boxes.

More Gilmour
If you love Gilmour’s searing guitar lines and howling solos (and I know plenty of people who do), you’ve come to the right place. Between all the studio and live recordings, you literally get hours of fretwork from the man — much of it illustrated by close-up shots of his fingers and fretboard. The air guitarist in your family will thank you.

The Packaging & Extras
As always, Pink Floyd don’t miss a trick when it comes to presentation. The CDS come in their own folder, complete wth credits. The DVDs and Blu-Rays come with plastic inner sleeves and glossy cardboard covers. The 7″ singles of Arnold Layne (from a 2007 Syd Barrett tribute show) and Lost for Words (from their 1994 tour rehearsal) both come with cover sleeves and etched B-sides. The 60-page hardcover photo book, softcover lyrics book, tour programs, tickets, posters and backstage passes are all superbly rendered and reproduced. Everything fits snugly in the foam-lined box, which features cavities for the discs, a pullout ribbon and cardboard spacers to keep the books in place.

The Completeness
Sure, you can quibble about various elements of the box — and I definitely do; read on — but you can’t accuse Pink Floyd of holding out on you. As on previous boxes, they almost empty the vaults here, tossing in everything from full-length albums and concerts to TV spots and minute-long bits of footage. For packrats, completists and fanatics, it’s the ultimate in one-stop shopping (with a couple of exceptions listed below).

REASONS TO SKIP IT

The Mediocrity
Not to put too fine a point on it, but let’s be honest: The post-Waters era is hardly Pink Floyd’s high-water mark. And A Momentary Lapse of Reason, The Division Bell and The Endless River are a long way from Dark Side of The Moon and The Wall. In fact, Gilmour supposedly ended up reworking some of Momentary Lapse after the record label complained it didn’t “sound a fucking thing like Pink Floyd.” They weren’t totally wrong; unless songs like Learning to Fly, Dogs of War, One Slip and On The Turning Away get heavy rotation in your world, you can probably live without this.

The Endless Repetition
Speaking of those songs: One studio and live version of each would be enough for most people. But The Later Years includes multiple takes of each — including plenty of duplicates that appear on both the DVD and Blu-Ray discs. Does anybody really want to pay for nine copies of Learning to Fly and seven takes of Dogs of War?

The Video Transfers
Technology has made great strides when it comes to upgrading audio. Video? Not so much, apparently. At least, not judging by this. Sure, the Blu-Ray picture quality is better than your old VHS tapes or first-generation DVDs. But even these discs are a long way from pristine, especially in these days of 4K UHD. And with the exception of Delicate Sound of Thunder (which was presumably captured on film), most of them aren’t wide-screen. Looks like shooting everything on videotape back in the day wasn’t such a great idea after all.

No Roger Waters
Granted, the whole point of this set is to showcase the Gilmour-led version of the band. Fair enough. And admittedly, the outspoken Waters hasn’t done a lot to endear himself to folks over the years, what with his controversial political stances and endless retooling and recycling of The Wall. But it’s impossible not to notice that the band’s mini-reunion at 2005’s Live 8 festival is not included in this box — a glaring omission that seems nothing short of petty in a set this comprehensive. Just bury the damn hatchet already.

No Context
Another thing that’s lacking in this box: Any sort of historical or biographical essay or detailed liner notes to put everything in perspective. On the one hand, it’s probably no surprise that Gilmour and Mason would be reluctant to revisit the breakup of the band and the associated legal, personal and artistic upheaval it wrought. Even so, now that so many years have passed, this seems like it would be a good opportunity to set the record straight. Or at least have their say.

The Price
It’s going for nearly $500 on one prominent online retailer. That’s a lot to ask of even the most dedicated Floyd fan. Thankfully, there’s also a single-CD or double-vinyl set of highlights available for far less. Or you could just listen to it at the bottom of this post. You’re welcome.

On CD
• 1987’s A Momentary Lapse of Reason (updated with new drumming from Nick Mason and previously unheard performances from late keyboardist Richard Wright).
• 1988’s double-live album Delicate Sound of Thunder, reconfigured, remixed and expanded with eight extra songs from A Momentary Lapse and Dark Side of the Moon.
• 1990’s Live at Knebworth, a seven-song headlining set released in its entirety for the first time.
• Studio outtakes from 1994’s Division Bell sessions, plus random live tracks from 1987 and 1994 that were previously released as single B-sides.

On Blu-Ray and/or DVD
• Surround-sound and high-resolution stereo mixes of the updated Momentary Lapse, the studio rarities and the 2014 version of The Division Bell.
• 1989’s Delicate Sound of Thunder concert film, digitally restored, remixed and remastered, including a version of Money previously unavailable in some regions.
• 1995’s Pulse concert video (which includes Dark Side of the Moon in full), digitally restored and re-edited.
• 1989’s Venice concert video, originally broadcast on television, along with video of the entire Knebworth set from 1990.
• Unreleased performance and rehearsal footage from the Delicate Sound of Thunder tour, along with video-backdrop footage from the Momentary Lapse and Division Bell tours, plus music videos from those albums and The Endless River.
• A full-length video of The Endless River by artist Ian Emes.
• Footage of the band’s Waters-less 1996 Rock and Roll Hall of Fame induction (featuring a rendition of Wish You Were Here featuring Billy Corgan); a performance and rehearsal of Arnold Layne at a 2007 Syd Barrett tribute; a Pulse TV ad; documentaries on the cover shoots for Momentary Lapse and Division Bell; a doc on airships used to promote Division Bell; the Endless River EPK, plus scenes from an album launch party.

On Vinyl
• 7″ singles of Arnold Layne (from the Barrett tribute) and Lost for Words (from the 1994 tour rehearsal), both with cover sleeves and etched B-sides. 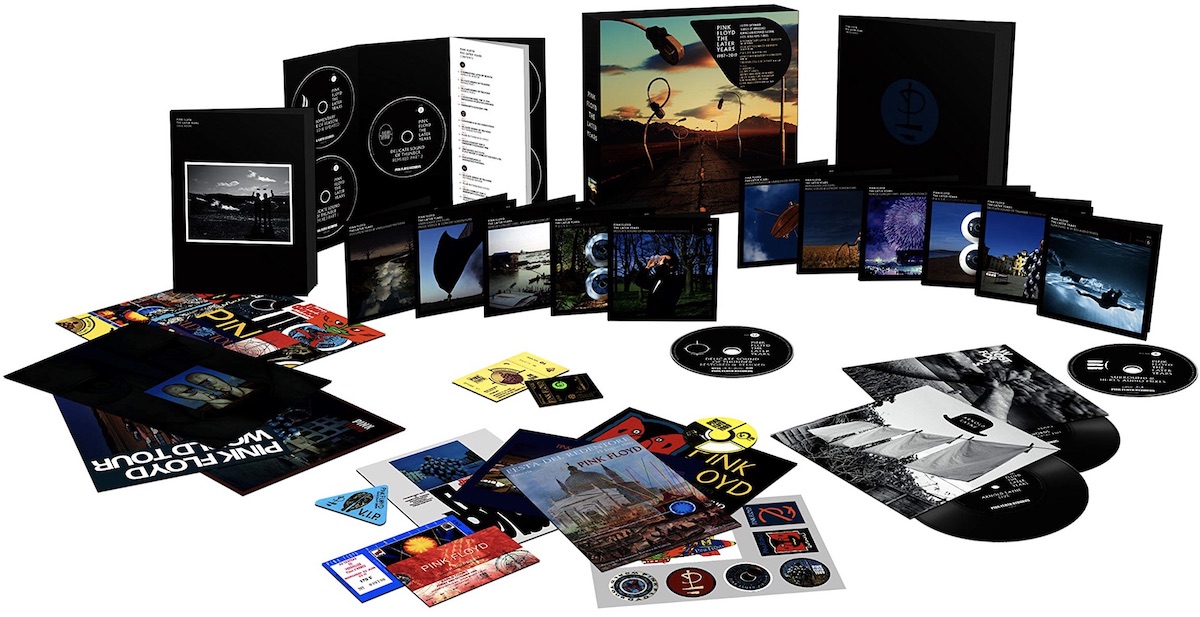