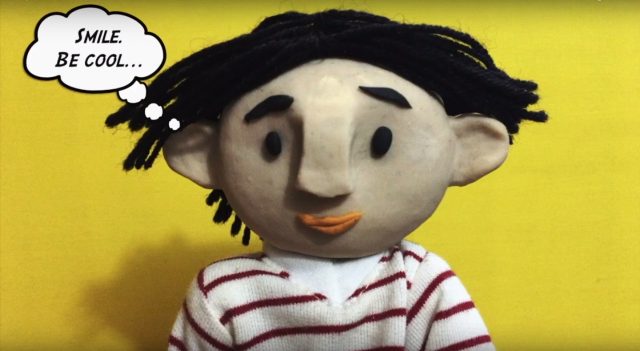 Troy Kokol DIYs it, Sal Dulu has staHHr power, Kin Capa builds a mystery, Jonart’s lost art is found and more in today’s treats from SubmitHub, the site where artists pay a small fee to send songs to reviewers like me. If you’d like to try to get in on that action, my page is here. But I warn you: The lineup can get pretty long.

A great metaphor can be everything you need sometimes. And Troy Kokol‘s single has one of the brightest ones I’ve heard lately: “I’m just a lightbulb in a box, taped up and full of rocks.” As romantic imagery goes, it’s genius. But the deservedly acclaimed Calgary singer-songwriter and DIY multi-tasker doesn’t stop there. This delightfully endearing roots-pop gem also boasts a rousing stomp-clap rhythm, an instantly addictive melody, a simple yet distinctive arrangement highlighted by mandolin and banjo, a whistle-while-you-work middle eight and even a dash of yoo-hoo yodelling in the chorus. And if all that’s not enough, he even crafted the song’s stop-motion puppet video. It’s everything you need and more.

To quote the esteemed philosopher Madonna: Music makes the people come together. (Yeeeaaahhh.) In this instance, those people are Irish pianist and composer Sal Dulu and Atlanta hip-hop artist staHHr (or Stahhr if you’re not into the whole typography thing). On this collaborative experiment, the former fashions a layered and complex dreamscape fashioned from elements of jazz, classical and hip-hop, deftly combining subliminally ringing chords, glitchy textures, quietly explosive outbursts and a headnodding groove that twists and turns and starts and stops — all the better to display her intricate and intelligent rhymes, which are unfurled with an earthy attitude and integrity that flawlessly complement and ground his musical flights. Or, to put it another way: Yeeeaaahhh.

A little mystery is good thing. For proof, look no further than Kin Capa’s Re-Cover-Re. This dusty, understatedly urgent guitar-rock chugger comes from one-man-band Lee Capa of California – though the song is credited to someone Gianluca Nigrelli. Capa says it was produced by a music industry vet, though it definitely sounds home-recorded. Finally, he says the darkly driving cut is also known as The Scream from the interval phase/part of the second chapter in his double-headed creation The American Opera, due this summer. None of that lessens the impact of this relentlessly propulsive and strangely mesmerizing hit of grim intensity. But it does make you want to hear more. If only to get some answers.

Simplicity is a lost art. Except in the case of Jonart’s gorgeous ballad Lost Now, ironically enough. As the German singer-pianist puts it, “The acoustic version of Lost Now is meant to calm you down. It only features a piano, strings and layered vocals. The vocals and the piano are not edited (no AutoTune) … this song is meant to sound raw and real.” Factor in Jonart’s plaintively fragile delivery, richly structured harmonies and sweeping instrumental melancholy and there’s only one thing left to say: Mission accomplished. It’s a real find.

I have never been a tourist in Singapore. But I have definitely been in relationship limbo. Which is really what British electro-pop outfit Fond of Rudy’s catchy tune Singapore is all about. Though here’s the rub: All those anxious feelings of yearning and desire are set against a track as bright, sweet and sticky as the bubblegum stuck to the shoe on the single’s cover. So while you’re bouncing along with the pulsing beat, enjoying the vibrant solo and singing along with the earworm chorus, the emotional undercurrents balance the scales by bringing just the right amount of poignant gravity to the proceedings. It’s everywhere you want to be.

You have to give props for persistence. And the Vancouver gents of Ponytails clearly have it. I already shared this soulfully romantic and impressively Beatlesque retro-pop ballad Too Long in a massive roundup last week. But since they sent it to me again here — and especially since it artfully fuses echoes of Don’t Let Me Down with lyrics about “the experience of passing someone by on the street that you once shared a life with,” I figure what the hell. Taking another stroll through their bittersweet memories and simple sincerity will do you good. Stay golden, Ponytails.

There are countless online playlists specially tailored to soundtrack and motivate your workout. But I can’t think of many (if any) songs as specifically geared to stationary biking as Chicago rapper KomRon’s Spin Class. Then again, what else would you expect from a self-described NBA doctor-turned-rapper (my condolences to his parents) who is graced with warm molasses pipes, a rhythmic, precise delivery and a knack for setting sports analogies against irresistible grooves. Thankfully, that’s not the limit of his abilities: Too Late, the second track he send along, makes it clear his deep-well baritone and confident flow also go well with relationship tales — especially when they’re bouncing over a burbling, bass-and-piano fingersnapper. Sign up.

Too many rappers are so obsessed with showing off their verbal prowess that they forget about minor things like songcraft. Skevious Tips and Myer Clarity don’t have that problem — not on Wonderful, anyway. The Toronto duo’s single is an expertly poised offering that balances his musically minded flow and sure-footed stance with a strong melody, an earworm refrain and colourful production. The result is a track that pretty much lives up to its ambitious handle.

Youth is not always wasted on the young. Rapper Eleven9 is just 21 years old, but the Philadelphia rhymeslinger displays skills and poise beyond his years on his single He Say She Say. Stylishly complemented by jazzy tones and smeary production, the slow-burning highlight from his EP Heart of a Player effectively showcases his laid-back aplomb, dusky melodies and in-the-pocket flow. However you crunch the numbers, it all adds up to an impressive debut.