Canadian duo The Handsome Shadows are paying heart-felt tribute to the one and only Tom Petty — and launching their new lyric video exclusively with Tinnitist!

Tom’s Song is a love letter to the late American singer-guitarist, penned by lifelong friends and huge Petty fans Gary Brown and Yurko Mychaluk. Fittingly, it’s a slice of laid-back heartland folk-rock reminiscent of the man himself, with lyrics woven from some of Petty’s classic hits. 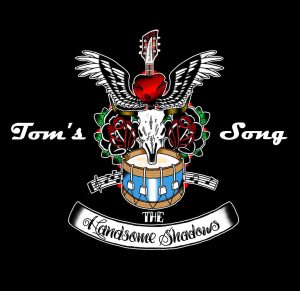 The song was written while the pair were playing Petty songs on acoustic guitars at a cottage in Northern Ontario earlier this year. “The song just seemed to write itself,” according to Brown. “It flowed out in a matter of minutes. It just happened.”

If Brown and Mychaluk’s names ring a bell, no wonder: Brown was the lead singer and main songwriter of The Tenants, who enjoyed much success in the ’80s thanks to hits like Sheriff and Something Else. The band toured with acts such as Rush, Simple Minds, Tom Cochrane, Honeymoon Suite, Platinum Blonde, Streetheart and Harlequin. In 1983, they headlined the Olympic Stadium in Caracas, Venezuela as their single You Don’t Know What I’ve Been Through was #1 on Caracas radio.

Mychaluk was the guitarist and back-up vocalist for Nelly Furtado on her Burn In the Spotlight world tour, sharing the stage with U2, Coldplay, Destiny’s Child, Foo Fighters and No Doubt. Yurko is also the lead-singer/guitarist for Toronto’s Klooch. They have toured North America, Australia and Europe and their single Beautiful has charted on Much Music and Much More Music. He has played on albums by Emma Roberts and Amanda Stott, and tours with Kim Mitchell.

Check out Tom’s Song above!