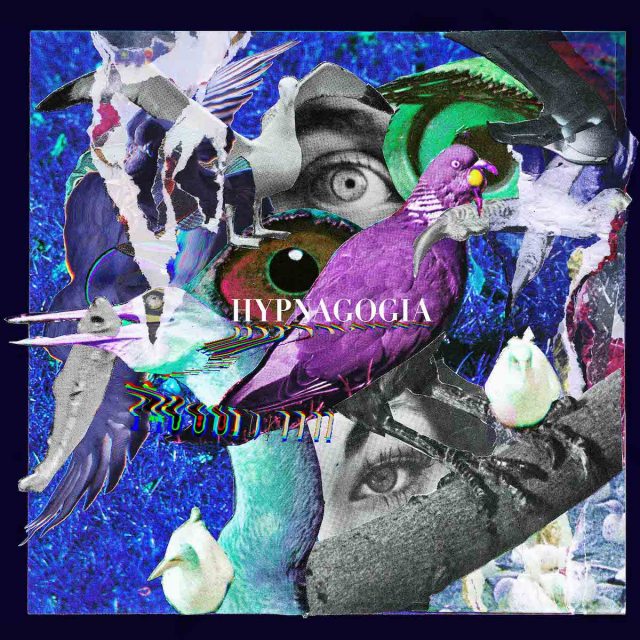 From The City That Never Sleeps comes the latest joint effort by two underground music veterans, both well known (and acclaimed) for their various collaborations and bands over the years: Sitar player Jarvis Earnshaw and Trevor Dunn, perhaps best known as a member of Mr. Bungle and Fantômas, but also owing to his otherwise stacked pedigree making music with the likes of John Zorn, The Melvins, Diatom Ribbons, Trio Convulsant and Endangered Blood. Playing contrabass and percussion, the beat and vibe he produces is the perfect complement to the sitar, tape loops and vocals contributed by Earnshaw, who himself has earned quite a reputation for himself over the years through participation in the projects SYRINX-Series, Question, Harbinger, Luke Stewart and the Jarvis Earnshaw Quartet.

Today brings the release of their new album Hypnagogia under the Travis Duo moniker, with just over half a dozen tracks taking us down the rabbit hole of experimental and psychedelic ethno-jazz. So it should come as no surprise that they worked with groundbreaking producer Martin Bisi (Sonic Youth, Herbie Hancock, Afrika Bambaataa, DNA, White Zombie, Ginger Baker, John Zorn), recording and mixing the long-player at his BC Studio in Brooklyn. If the clout already associated with this album weren’t enough (it is), this release was mastered by Josh Bonati, known for his work with William S. Burroughs, Zola Jesus, Beak>, Mort Garson ‘Plantasia’, Slowdive and Jenny Hval.

Aptly titled Hypnagogia (\.hip-næ-‘gä-jia. of or pertaining to the period of the transitional state between waking life and dreams: hypnagogic hallucinations), this collection of improvisations was based on a set of line drawings and diagrams drawn during lucid dreams. The duo are also offering a series of audio-visual delights in support of this release, including for track Hitherto, FAQ, Fair Weather Friend, and the latest video for Uchouten / Sab Kuch Milega.

Hypnagogia is bold and honest, weaving a tapestry of colours and pushing abstractions. They present an impressive hybrid of styles, whilst gently nestling on their pop roots. The kaleidoscopic overtones of the sitar dance elegantly with the charismatic and eloquent contrabass. This is psychedelic ethnic-flavoured jazz with a mean right hook.

Earnshaw shared some words: “This album is a meeting of minds that cross generations, timelines and genres, as if ancestral cheerleaders were egging us on. The personnel age gap on this record spans 50 years, the youngest being in his 20s to the oldest in his 70s. Every member is a highly distinguished unique musician in their own right and at the top of their field, creating gorgeous music in every genre, pulling inspiration from our vast experiences of life — from abstract noise, punk, jazz, rock, hip-hop to chamber music and beyond. This has magically shaped this album, which extends beyond genre and is pure expression at its finest above and beyond boundaries.

“I grew up in backwoods bumblef*ck countryside Japan and would have never imagined that I would be playing music with my hero Trevor Dunn. I still remember the first time I heard his band Mr. Bungle smash open my head with the bottlecracking Travolta. 13-year old me was obsessed with the band, which has really shaped the person I am today. Martin Bisi, the humble legend, has produced most of the music I listened to growing up, which can probably be said by a lot of people. In many ways, this is a dream-come-true album and I still keep pinching myself or perhaps this is all just a lucid dream.”

London-born Earnshaw spent most of his childhood in Japan, releasing his debut album at the tender age of 15. After graduating Bunka Gakuin Art School in Tokyo, he studied sitar in India, and later graduated from the Pratt Institute in New York. Both as a musician and visual artist, his work is recognized worldwide, having solo exhibitions, residencies and performances throughout the world, including Fuji Rock Festival, Europe, India and across America to New York’s own Lincoln Center.

Hypnagogia is available as a limited edition of 500 albums on dark blue vinyl. The seven core tracks come with bonus track Lolloping Theta Broom Horse and a16-page full-colour booklet. It can be pre-ordered directly from Earnshaw HERE or via Bandcamp.