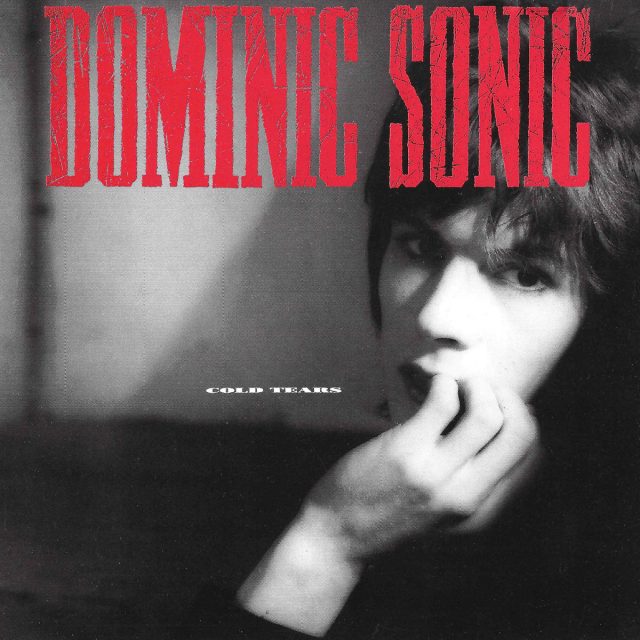 THE TRANSLATED & EDITED PRESS RELEASE: “Dominic Sonic, born Garreau in Dinan (Côtes-d’Armor) in 1964, was just 16 when he joined the Breton punk group Kalashnikov. With them, he scoured concert halls and festivals (including the Transmusicales de Rennes in 1983). Six years and 300 concerts later, he left the band and began working on his first solo album in Brussels.

Alternating vocals in French and English, the 12 songs on the album are stuffed with scathing guitars that recall The Stooges at times (with a little Kinks in the guitar riffs), and do not hesitate to detour into folk-punk and psychedelia. They were recorded in 12 nights by Sonic and guitarist Vincent Sizorn, with the participation of A. Sloan (keyboards), Tonio Marinesco (drummer of Kalashnikov), Pierre Corneau (of Marc Seberg), and Bénédicte Villain (of Passion Fodder). The album was produced by Gilles Martin (Tuxedomoon, Minimal Compact, Zazou Bikaye, etc).

The album was a great success: European sales exceeded 40,000 copies and Sonic toured throughout France, even performing at the Olympia as the opening act for Noir Désir. The track When My Tears Run Cold was the subject of an inventive music video, directed by Jo Pinto Maia. Sonic even took part in the Transmusicales de Rennes in 2002 as a surprise guest of The Stooges, of whom he was a big fan (he would even say that he knew their songs better than his). In 2009, he returned to the stage for a special tour celebrating the 20th anniversary of this cult album. He died on July 23, 2020. He was 55 years old.

This reissue — which appears on CD, LP and digital — includes the 12 original tracks, as well as five bonuses released as an EP in 1990: Three tracks recorded in concert (Shadows In The Fire, No Fun, Praying For The Lord), a later version of À S’y Méprendre and a new one (A Pain Song).”