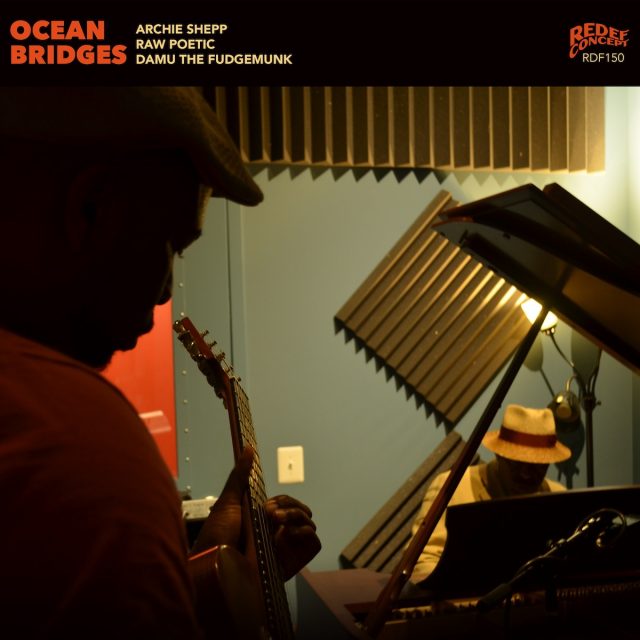 There probably aren’t a lot of rappers who want to make an album with their uncle. Then again, there probably aren’t a lot of rappers who have a jazz legend like Archie Shepp in their family. The saxophone master and his nephew Jason Moore (aka Raw Poetic) — along with a band led by percussionist, DJ and producer Earl Davis (aka Damu The Fudgemunk) — effortlessly join forces on this intimate improvised collaboration, loosely jamming over mellow but snappy grooves that hit the sweet spot between their individual worlds, philosophies, approaches and styles. The casually flowing tracks, the nimble interplay of instruments and vocals, the between-song segments where Shepp holds court on everything from politics to production — they all fuse into an intriguing and engaging musical hybrid unlike anything else out there right now. You can only imagine the kind of album they could come up with if they actually wrote songs and rehearsed ahead of time.

THE PRESS RELEASE: “Archie Shepp, Raw Poetic, and Damu The Fudgemunk are pleased to announce their new album Ocean Bridges. Entirely improvised, Ocean Bridges was intentionally created without any direction, resulting in a finished product with natural energy, a conversation of ideas that transcend genre. It blends live improvised music, jazz, hip-hop, and many other musical directions into a one-of-a-kind sound. Ocean Bridges was initially conceived after Jason Moore (aka independent, underground rapper Raw Poetic) attended an event with his mother at the Kennedy Center honoring his uncle, legendary saxophonist, Archie Shepp. Moore had sent over a dozen projects to Shepp over the last two decades, but after hearing some of Moore’s recent projects with producer/DJ, Damu The Fudgemunk, Shepp felt his nephew was, in a sense, “ready”. The album’s title, Ocean Bridges, intends to signify a bridging-of- the-gap in their family’s story and a re-establishing of the connection between young and old in their general community. Recorded with a live ensemble — Archie Shepp (tenor saxophone, soprano saxophone, Wurlitzer), Raw Poetic (vocals, raps, lyrics), Earl “Damu the Fudgemunk” Davis (drums, vibraphone, vocals, turntable scratching), Pat Fritz (guitar), Aaron Gause (wurlitzer, synthesizer), Luke Stewart (acoustic bass, electric bass), Jamal Moore (tenor sax, percussion), and Bashi Rose (drums, percussion) — in August 2019 between Washington, DC and Northern Virginia, Ocean Bridges fuses different musical concepts to adapt in a hip-hop format — all of the instrumentation is accompanied by vocals. The sound is unforced, impossible to duplicate, relying on a one-take method. It is very much an organic collaboration where contributors of different and overlapping musical sensibilities have joined together in one space.”