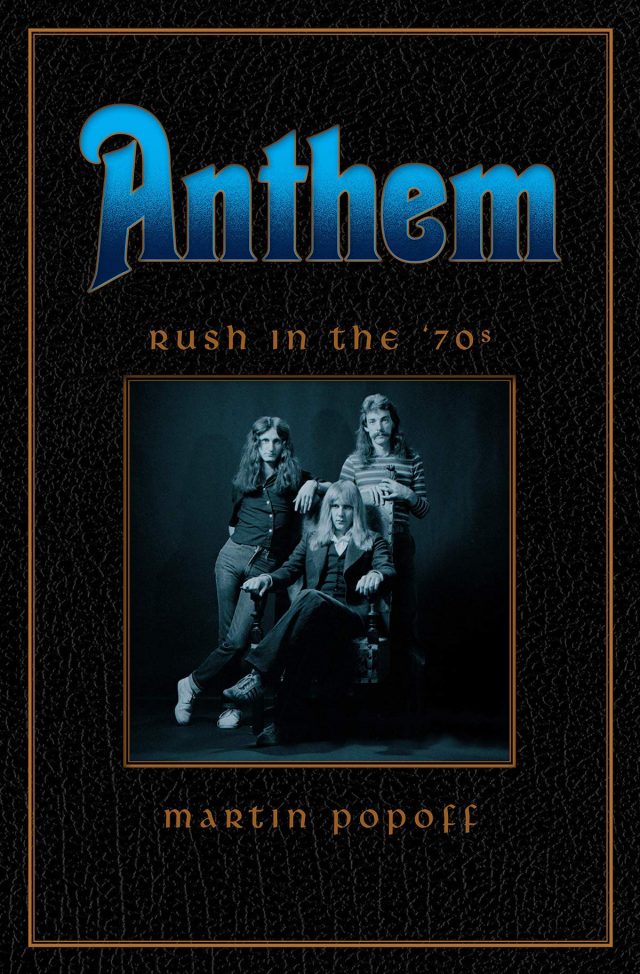 Still looking for that last-minute gift for Mom? You’ve got some great options here — assuming your mom digs early Rush, owns the Hawkwind catalogue, wants to dress like Miles Davis or has unanswered questions about Red Hot Chili Peppers. No? Well, I tried. 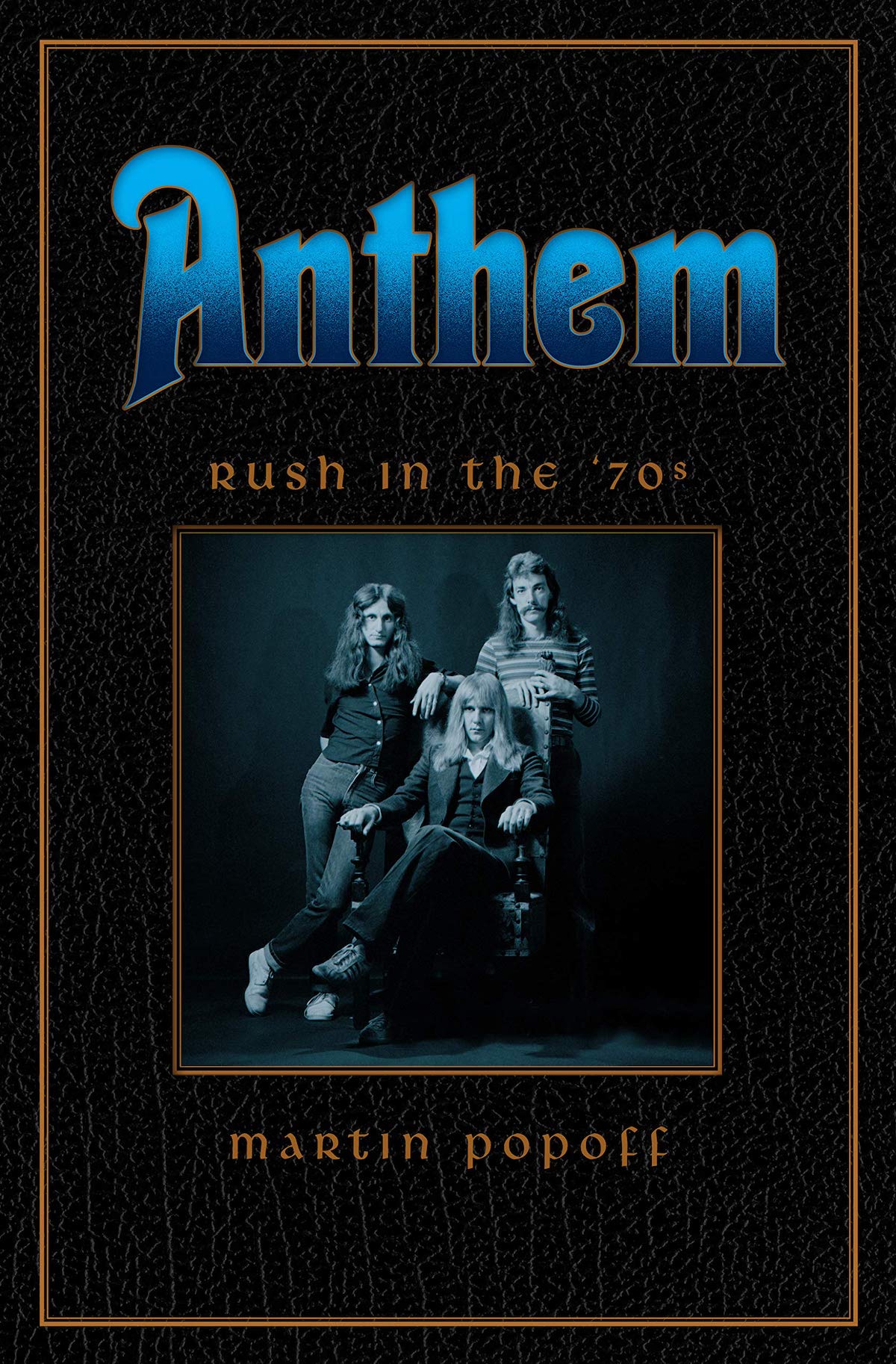 Anthem: Rush in the 1970s
By Martin Popoff

THE PRESS RELEASE: “With extensive, first-hand reflections from Geddy Lee, Alex Lifeson, and Neil Peart, as well as from family, friends, and fellow musicians, Anthem: Rush in the ’70s is a detailed portrait of Canada’s greatest rock ambassadors. The first of three volumes, Anthem puts the band’s catalog, from their self-titled debut to 1978’s Hemispheres (the next volume resumes with the release of Permanent Waves) into both Canadian and general pop culture context, and presents the trio of quintessentially dependable, courteous Canucks as generators of incendiary, groundbreaking rock ’n’ roll. Fighting complacency, provoking thought, and often enraging critics, Rush has been at war with the music industry since 1974, when they were first dismissed as the Led Zeppelin of the north. Anthem, like each volume in this series, celebrates the perseverance of Geddy, Alex, and Neil: Three men who maintained their values while operating from a Canadian base, throughout lean years, personal tragedies, and the band’s eventual worldwide success.” 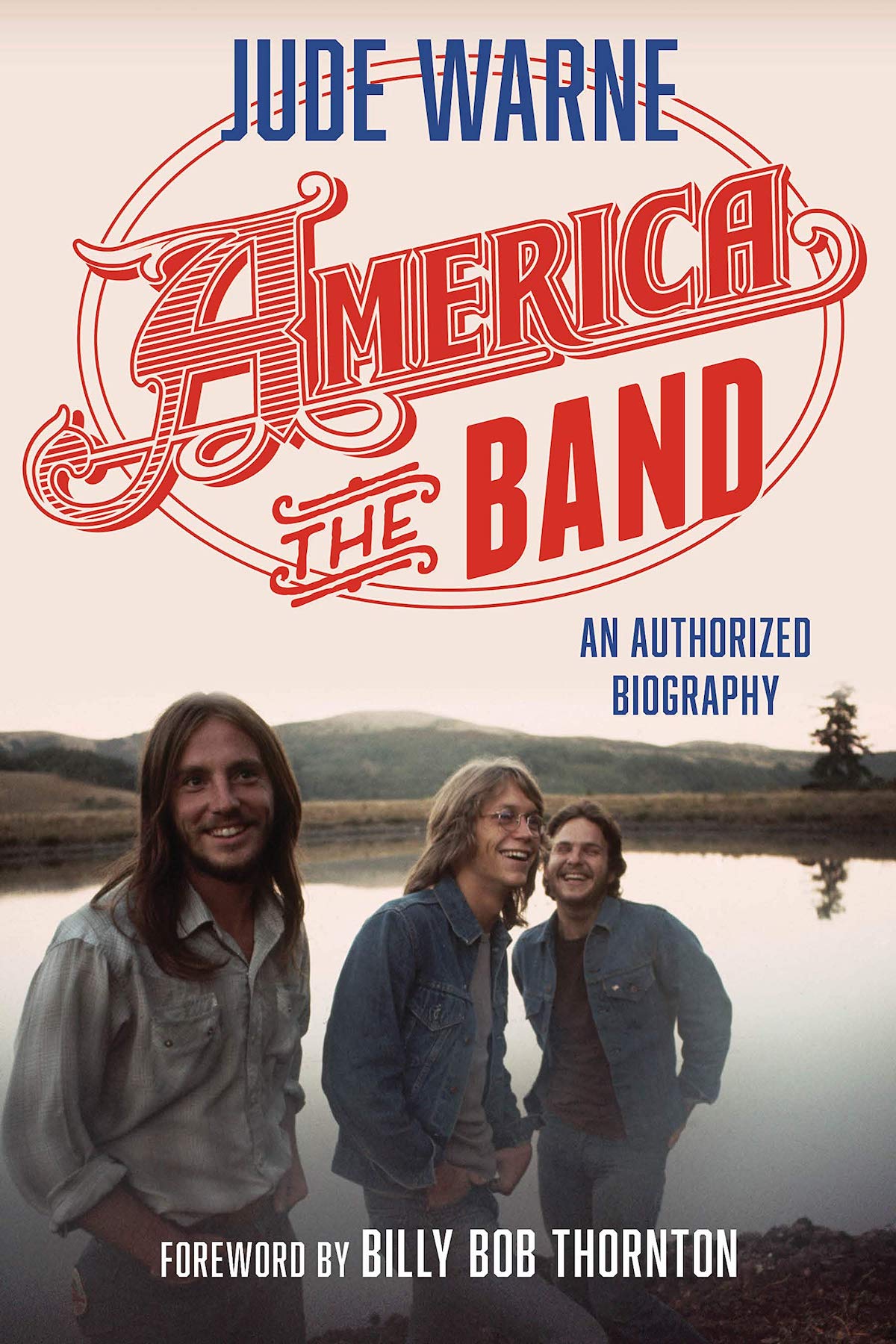 America, the Band: An Authorized Biography
By Jude Warne

THE PRESS RELEASE: “As if recovering from a raucous dream of the 1960s, Gerry Beckley, Dewey Bunnell, and Dan Peek arrived on 1970s American radio with a sound that echoed disenchanted hearts of young people everywhere. The three American boys named their band after a country they’d watched and dreamt of from their London childhood Air Force base homes. What was this country? This new band? Classic and timeless, America embodied the dreams of a nation desperate to emerge from the desert and finally give their horse a name. Celebrating the band’s 50th anniversary, Gerry Beckley and Dewey Bunnell share stories of growing up, growing together, and growing older. Journalist Jude Warne weaves original interviews with Beckley, Bunnell, and many others into a dynamic cultural history of America, the band, and America, the nation. Reliving hits like Ventura Highway, Tin Man and of course A Horse with No Name from their 19 studio albums and incomparable live recordings, this book offers readers a new appreciation of what makes some music unforgettable and timeless. As America’s music stays in rhythm with the heartbeats of its millions of fans, new fans feel the draw of a familiar emotion. They’ve felt it before in their hearts and thanks to America, they can now hear it, share it, and sing along.” 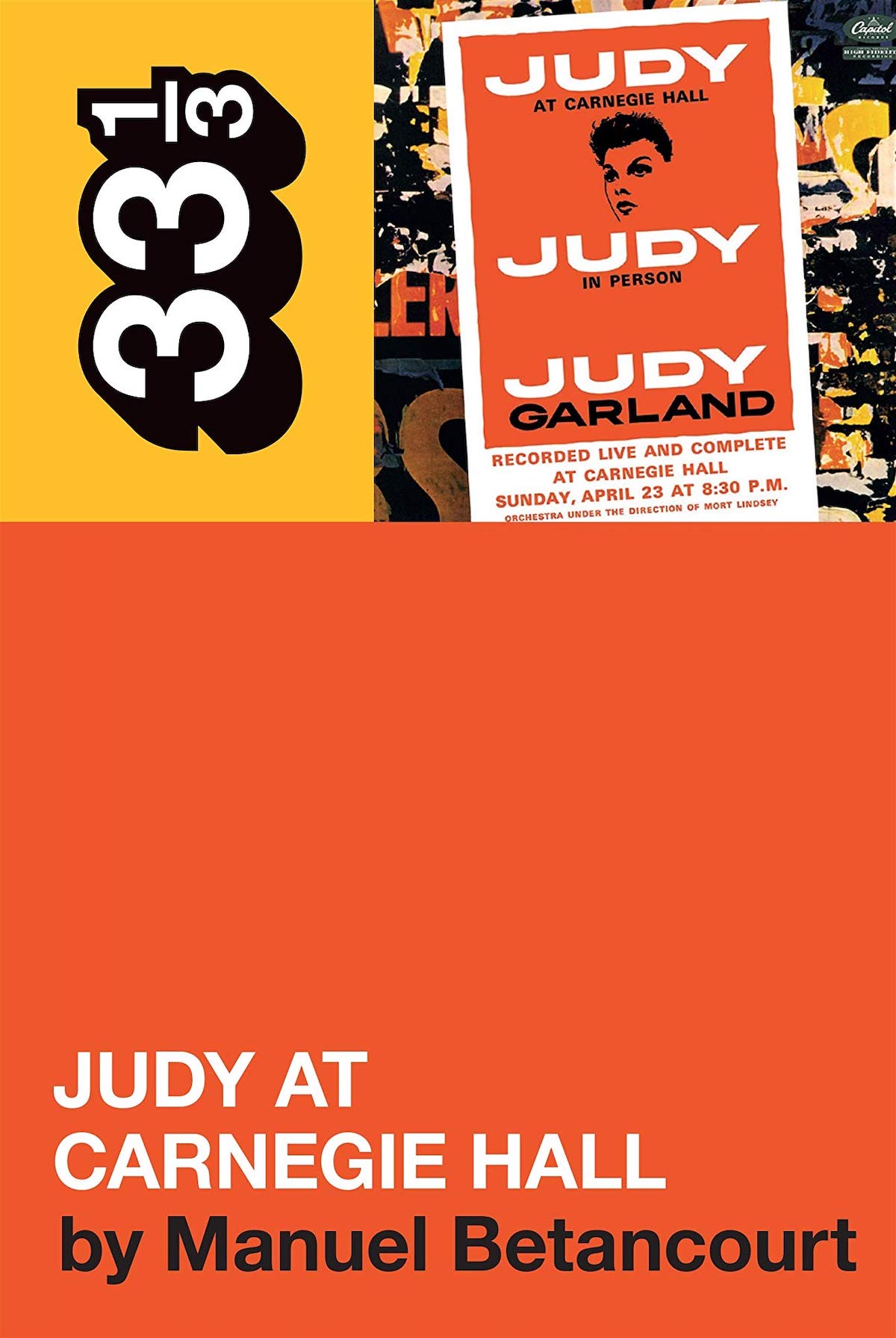 THE PRESS RELEASE: “On the night of Sunday, April 23, 1961 Judy Garland made history. That’s no hyperbole. Surrounded by a throng of ecstatic fans (3,165 to be exact), the legendary performer delivered a concert in Carnegie Hall the live recording of which became, upon release, an unlikely pop cultural phenomenon. Judy at Carnegie Hall, the two-disc set that captured all 25 numbers she performed that night, went on to spend more than 70 weeks on the Billboard charts, win four Grammy Awards — including Album of the Year (making it the first live music album and the first album by a female performer to win the category) — and become, in the process, the fastest-selling two-disc set in history. What the recording highlights, and what’s made it an enduring classic in a class of its own, is the palpable connection between the songstress and her fans. “Indeed,” The New York Times reported in its review of the evening’s proceedings, “what actually was to have been a concert — and was — also turned into something not too remote from a revival meeting.” By looking at her song choices, her stage banter, the album’s cultural impact, and her place in the gay pantheon, this book argues that Judy’s palpable connection with her fans is precisely what her Capitol Records’ two-disc album captured. 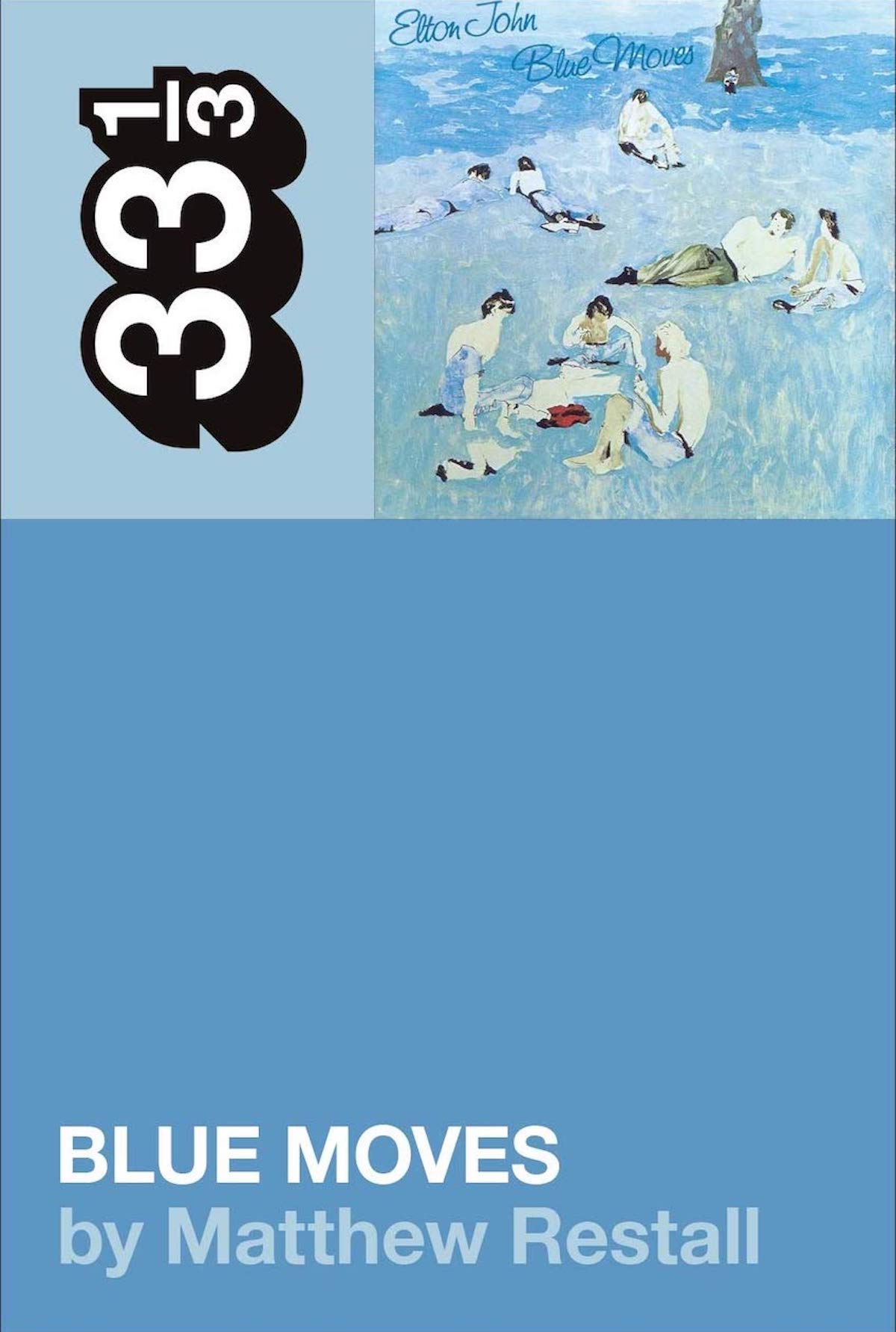 THE PRESS RELEASE: “By 1976, Elton John was the best-selling recording artist and the highest-grossing touring act in the world. With seven #1 albums in a row and a reputation as a riveting piano-pounding performer, the former Reggie Dwight had gone with dazzling speed from the London suburbs to the pinnacles of rock stardom, his songs never leaving the charts, his sold-out shows packed with adoring fans. Then he released Blue Moves, and it all came crashing down. Was the commercially disappointing and poorly reviewed double album to blame? Can one album shoot down a star? No, argues Matthew Restall; Blue Moves is a four-sided masterpiece, as fantastic as Captain Fantastic, as colorful as Goodbye Yellow Brick Road, a showcase for the three elements — piano-playing troubadour, full orchestra, rock band — with which Elton John and his collaborators redirected the evolution of popular music. Instead, both album and career were derailed by a perfect storm of circumstances: Elton’s decisions to stop touring and start his own label; the turbulent shiftings of popular culture in the punk era; the minefield of attitudes toward celebrity and sexuality. The closer we get to Blue Moves, the better we understand the world into which it was born — and vice versa. Might that be true of all albums? 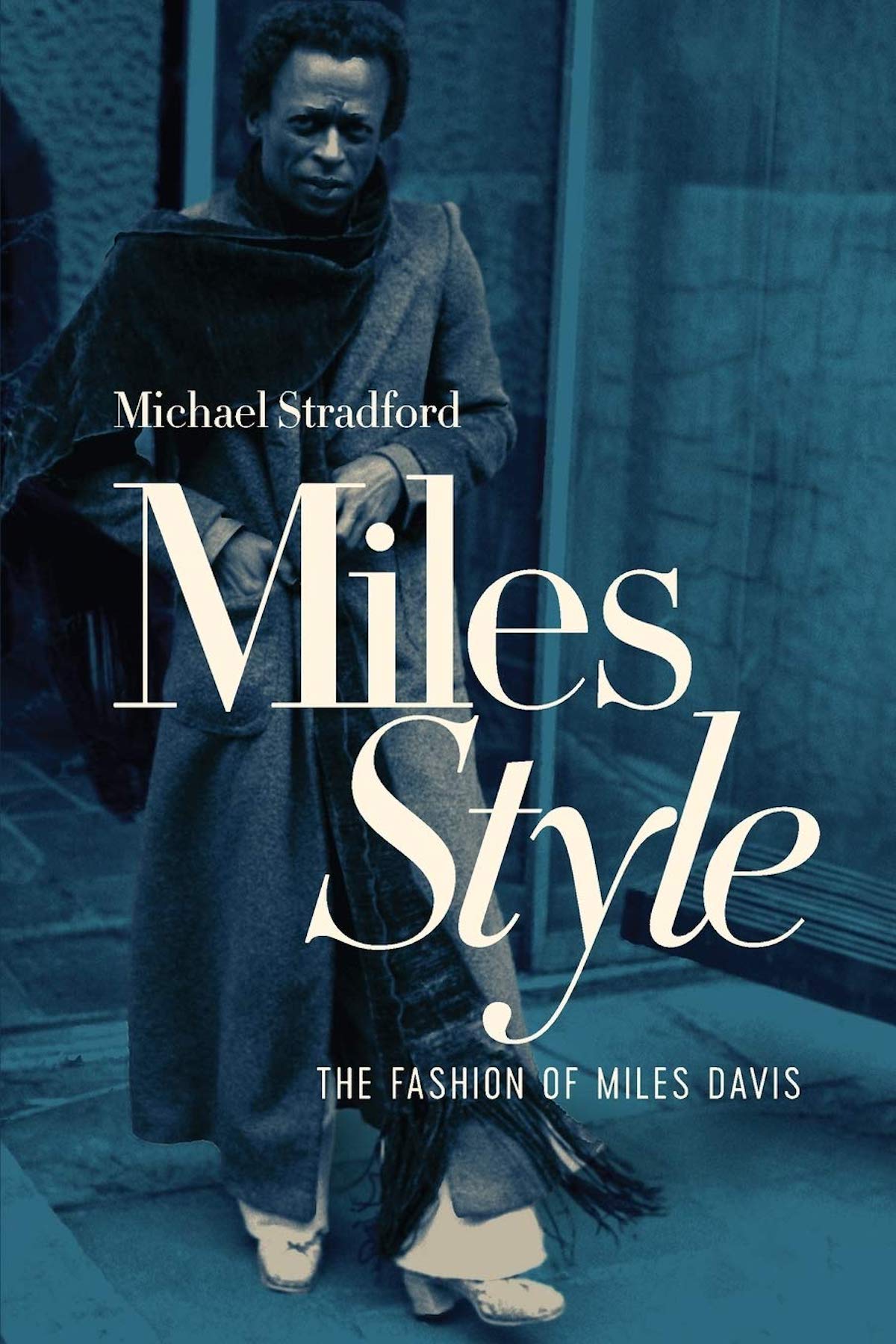 MilesStyle: The Fashion of Miles Davis
By Michael Stradford

THE PRESS RELEASE: “Miles Davis is one of the most revered artists of the last 100 years, regardless of the art form. Credited with ushering in a new age of jazz more than once, Davis’s unique perception of the world is best known through his memorable music and is arguably more popular now than ever. In later years, he earned additional acclaim as an abstract painter, with many of his originals selling for thousands of dollars and continuing to escalate in value. But his sense of personal expression didn’t stop with music and painting. Miles Davis’s restless, rebellious personality found an additional creative outlet through his interest in fashion. From the big shouldered, pleated suits of the forties, to the Ivy League look of the fifties, the sleek Italian suits of the sixties and the more avant-garde looks of the last twenty years of his life, Miles Davis blazed a fashion trail whose impact is still being felt today. MilesStyle is the first book to examine Miles Davis, the artist, using himself as a creative canvas. Milestyle features observations from notable fashionistas like Lenny Kravitz, Bryan Ferry and Lloyd Boston, as well as friends and bandmates like Quincy Jones, Ron Carter, Clark Terry and more regarding his sartorial evolution as well as what his style said about the music and the man. 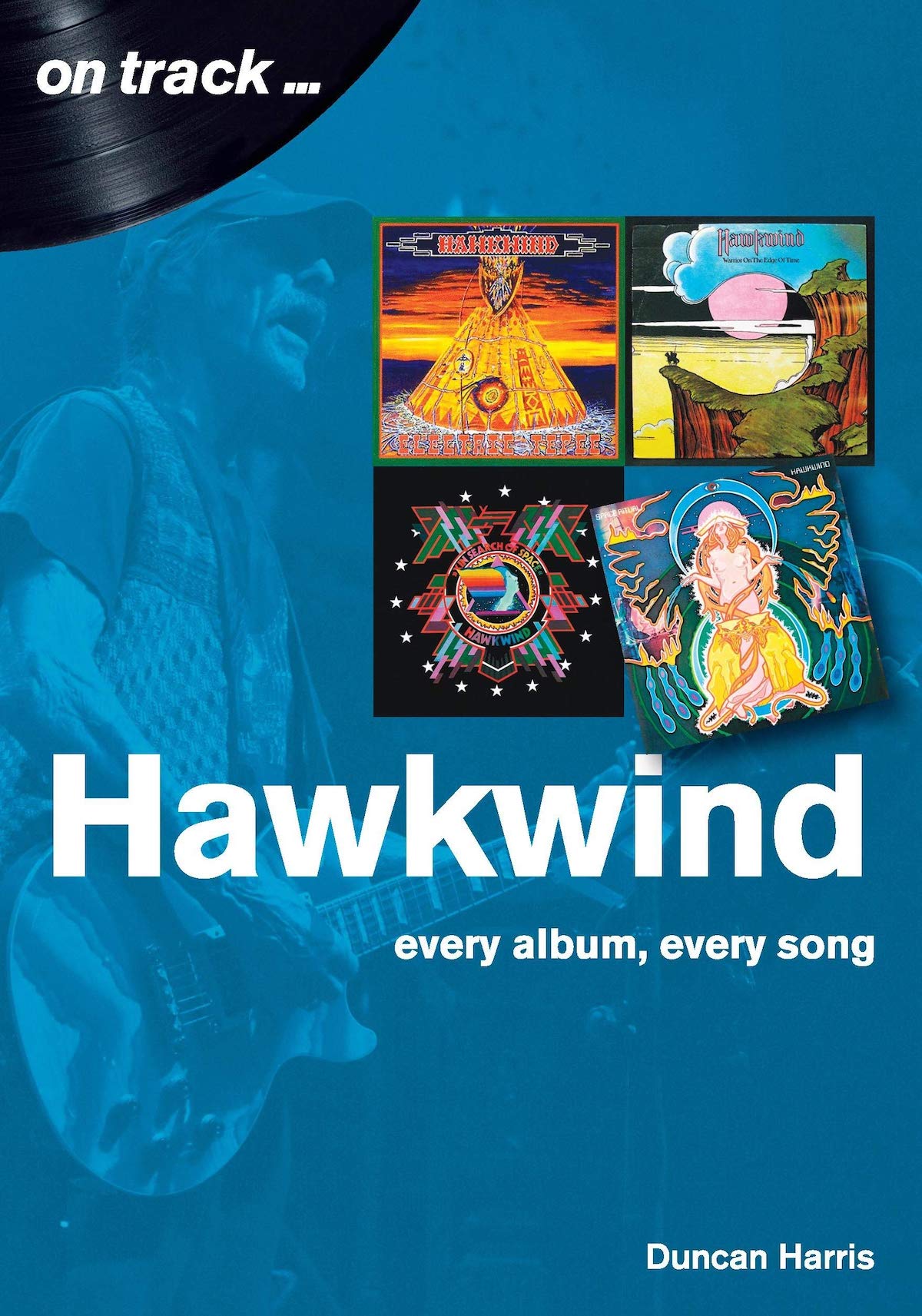 Hawkwind: Every Album, Every Song
By Duncan Harris

THE PRESS RELEASE: “Always enigmatic and outside of the mainstream, most people associate Hawkwind with ‘whoosh’ noises, Silver Machine, Lemmy and the sometime recognition that they produce something called Space Rock music. From the beginning, Hawkwind have been trailblazers, even when they have explored blind alleys and cul-de-sacs, and have been unafraid to innovate, and mutate strikingly different musical arenas. Hawkwind have a unique history in the world of rock music and have inspired not just other bands but also an entire sub-genre of music: Stoner Rock. Hawkwind’s stated aim is to be a substitute for mind-expanding drugs; instead using music, poetry, lights, projections, theatre and dance in an assault on the senses. Albums such as In Search Of Space and Warrior At The Edge Of Time as well as classic live album Space Ritual set a template for their astonishing take on rock music. With the band now celebrating over 50 years of existence, this book is a song-by-song analysis of every studio album and major live release to date. It is designed to be an illuminating companion to the extraordinary recorded works of a band no-one thought would achieve any longevity at all. From the highly regarded first five studio albums of the 1970’s, through the hard rock hardships of the 1980’s, the sometimes awkward musical dalliances of the 1990’s and ending with the unexpectedly triumphant return of the band in the 2010’s this book will cover every era and every line-up in detail. 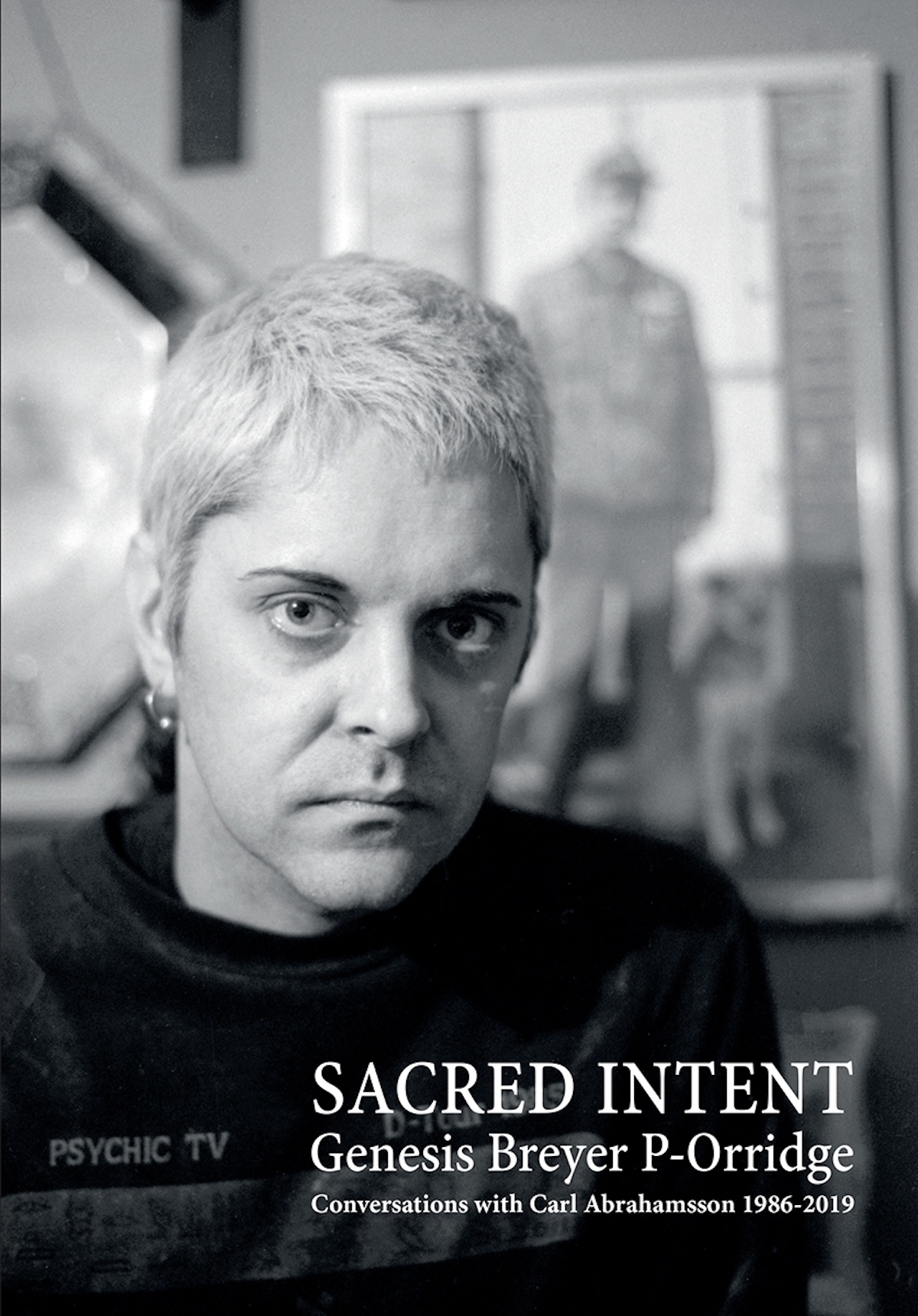 THE PRESS RELEASE: “Three decades of conversations with Genesis Breyer P-Orridge, provocateur, artist, gender revolutionary and leader of the bands Throbbing Gristle, Psychic TV and more. Published for legendary artist and musician Genesis Breyer P-Orridge’s 70th birthday in 2020, Sacred Intent gathers conversations between Breyer P-Orridge and his friend and collaborator, the Swedish author Carl Abrahamsson. From the first 1986 fanzine-based interview about current projects, philosophical insights, magical workings, international travels, art theory and gender revolutions, to 2019’s thoughts on life and death in the the shadow of battling leukaemia, Sacred Intent is a unique journey in which the art of conversation blooms to the highest degree. With (in)famous projects like COUM Transmissions, Throbbing Gristle, Psychic TV, Thee Temple Ov Psychick Youth (TOPY) and Pandrogeny, Breyer P-Orridge has consistently thwarted preconceived ideas and transformed disciplines such as performance art, music, collage, poetry and social criticism, always cutting up the building blocks to dismantle control structures and authority. But underneath P-Orridge’s socially conscious and pathologically rebellious spirit, there has always been a devout respect for a holistic, spiritual, magical worldview — one of “sacred intent.” Sacred Intent is a must read for anyone interested in contemporary art, deconstructed identity, gender evolution, magical philosophy and the responsibility artists may carry and contain within their work. The book not only celebrates an intimately deep friendship spanning over four decades, but also the work and ideas of an artist who has never ceased to amaze and provoke the status quo. Also included are photographic portraits of Breyer P-Orridge taken by Carl Abrahamsson. 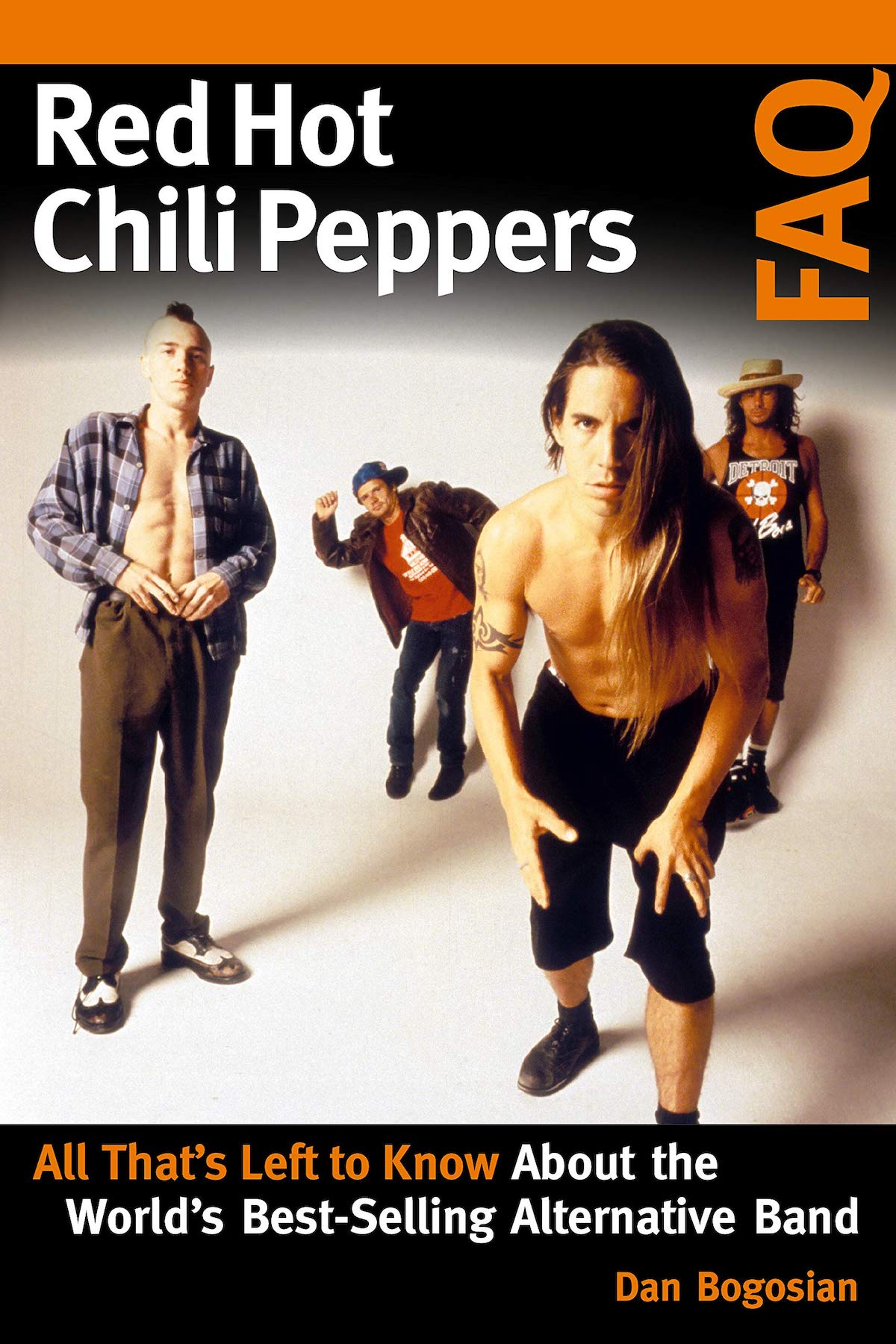 THE PRESS RELEASE: “From their humble beginnings as friends in high school, to playing strip clubs in nothing but well-placed socks, through a struggle to find the right guitarist, to the present day, Red Hot Chili Peppers FAQ chronicles the adventures of the best-selling alternative rock band of all time. No other book goes through each era of the band’s history. Unlike other band biographies, Red Hot Chili Peppers FAQ digs into the trivia that hardcore fans obsess over: every recorded (and unreleased) song and their origins, the story behind each band member’s every tattoo, and every piece of gear each band member past and present has ever used. Ever wonder why current drummer Chad Smith switched drum companies? Or how Flea and Dave Navarro ended up recording with Alanis Morissette on You Oughta Know? Just when did Anthony Kiedis meet current guitarist Josh Klinghoffer for the first time? When did Kiedis first try harder drugs? How did Cher end up as a babysitter for young Kiedis? When did Buckethead try out for the band? Who currently owns the mansion where they recorded Blood Sugar Sex Magik? All the answers lay in the pages of Red Hot Chili Peppers FAQ.