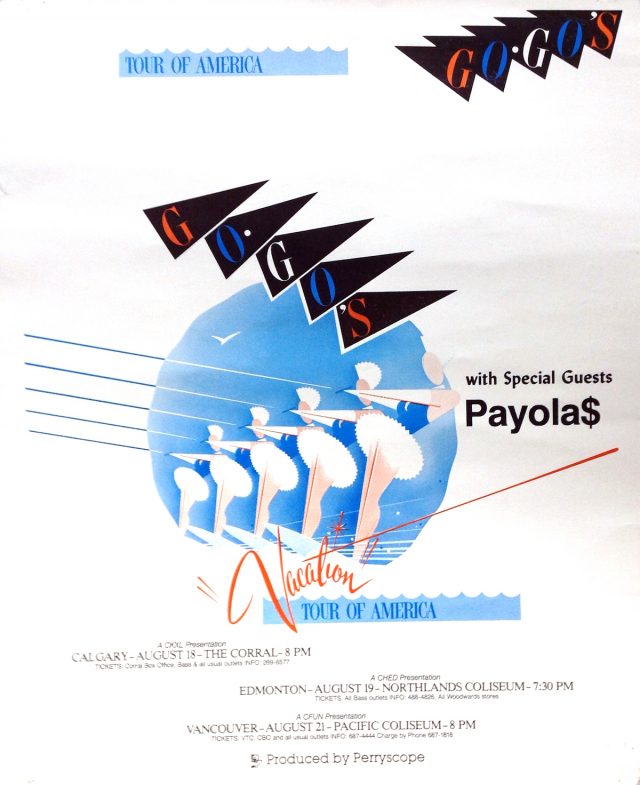 For my money, The Go-Go’s didn’t get the respect they deserved. At least, not back in the day. When the all-female L.A. quintet first appeared in the early ’80s, they were often dismissed as musical lightweights and judged on the basis of their looks. Obviously, a big chunk of that was due to the sort of basic garden-variety sexism that requires no elaboration — look no further than Rolling Stone’s infamous cover shot of the band in their underwear, with the headline Go-Go’s Put Out. Yeesh. Their incredible overnight success probably didn’t help, though. Barely a year after signing a record deal, they were already queens of the pop scene: They had a No.1 debut album with Beauty & The Beat and two hit singles with Our Lips Are Sealed and We Got The Beat. They were on TV and in magazines (not all of whom showed them in their skivvies, thankfully), and were already headlining arenas. Getting that big that fast always sparks some sort of backlash from the snobs. Finally, their image also undermined them; despite having come up in the L.A. punk scene alongside the likes of X and Fear — and being anything but choirgirls, based on a couple of members’ recent frank memoirs — they were shoved into the star-maker machinery and stripped of all their grit and street cred. Though I have to say, none of that ruined them for me. I was a fan from the day Beauty & The Beat arrived in the record distributor where I worked. (My copy of the initial pressing had different back-cover graphics than the later versions; I wish I still had it.) And I was happy to catch them live when they played these Western Canada shows in 1982. I saw the gig in Edmonton. At the time, their sophomore album Vacation had only been out about a week, but the title single had already been around for a couple of months, so everybody in the crowd was up to speed. I recall enjoying the show, though if memory serves, the band seemed somewhat dwarfed by the giant stage and cavernous arena setting — they still looked like they would have been more comfortable on a theatre stage. I also remember the opening act Payola$ — featuring Paul Hyde and superstar-producer-to-be Bob Rock — playing Eyes of a Stranger, but that’s about it. If you were there and remember it differently (or more vividly) than I do, perhaps you’d like to have this poster from the tour. Or maybe you’d just like to give them the respect they deserve, whether you were there or not. Either way, email me if you’re interested. UPDATE: This poster has been sold.