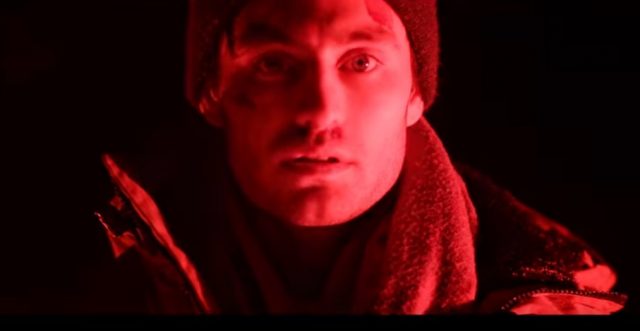 1 Singer-songwriter Adrian Galvin used to Walk the Moon. Now he goes by the handle Yoke Lore. And in the disturbing video for his folksy indie-pop single Chin Up — which comes his May 31 EP Meditations — he prowls the wilds of Alaska. Where he ends up embroiled in a traumatic incident that I won’t spoil further. SAYS THE PRESS RELASE: “This video is about a cycle of learning that we all go through. I paint a really tactile picture, but an allegory is only as strong as its commitment. We get thrown around by our relationships. We go through times of being taken care of and times of being mistreated, and even if we end up back where we started, we gain something along the way. Be that an awareness or a skill or an important memory, we always have the ability to grow from our movement, and each relationship offers us a beautiful opportunity to learn something new about ourselves.” Northward ho:

2 Does anybody really know what time it is? Does anybody really care? Apparently, Saskatoon’s artful indie-pop outfit Close Talker do. And in the world of their soulfully stylish new single it’s Half Past Nine. Which means it’s time to watch a strange, unsettling video about a guy in some serious peril on a desolate beach — apparently, tales of wilderness survival are the musical theme of the day. SAYS THE PRESS RELEASE: “The beach was vacant because it was too cold for the locals, so we thought we’d seize the moment and film a video that is cyclical in nature, beginning and ending in the freezing cold ocean. The video includes themes of chasing moments or feelings from the past, only to recognize that you’ll always be chasing if you don’t stop and enjoy the simple and often overlooked beauty around you.” Run for it, dude!

3 And the hits just keep on coming. Hey, I know rock ’n’ roll is a vicious game; April Wine told me so. But I have to say, based on the hardships L.A. singer-songwriter Ben Cooper of Radical Face seems to endure in his videos — both the recent Hard of Hearing and his new indie-pop offering Doubt — I am seriously starting to become concerned for his health. At this rate, by the time his EP Therapy comes out April 26, he’ll actually need some. SAYS THE PRESS RELEASE: “This is the most technically and physically demanding video I’ve ever done, as everything was done in-camera. No post was added at all, not even basics like color-correction. The idea was to build an evolving portrait, fading between extreme lighting and background differences while singing. The only problem was, for this idea to work, I couldn’t move at all between takes. So we built a chair that could fix the back of my head in place, and I had to concentrate on not moving my shoulders or tilting my chin at all for about 30 to 45 minutes at a time.” On the plus side, he wasn’t out in the middle of nowhere:

4 Say hello to Toronto folk-pop singer-songwriter Tim Moxam. Now say Goodbye Already. Because that’s the title of this charming orch-tinged new single from his just-released Marlborough Hall album. And because — judging by the accompanying video — he wants to be left allow to mope around his cabin in the woods and play with his dog. Just watch out for marauders, dude. Trust me, it’s going around. SAYS THE PRESS RELEASE: “Tim Moxam refuses to rest. A full-time musician and carpenter, his quietly dazzling folk-pop arrangements reflect the tireless patience, precision, and quality he brings to his work. And when his day is done and he starts to sing, the only sensible thing to do is listen.” Well, then he’s going to have to leave the cabin:

5 The best way to learn about a city is to walk the streets. And the cheapest way to make a video for your album A Japanese Fever Dream is to walk the streets of Tokyo with a camera in tow — as Edmonton electro-pop singer-songwriter Talltale makes colourfully clear in the video for Shed My Skin, the second single from her just-released disc. Hey, being alone in the crowd in Shinjuku sure beats shooting your clip on the sidewalks of Jasper Avenue. SAYS THE PRESS RELEASE: “Shed My Skin is a song I wrote about the self-reflection and self-growth that I feel happens at an accelerated rate when someone is away from their everyday routine. I think that a new environment lends itself as a kind of litmus test for your personality, and you start to see qualities in yourself that you like and dislike.” Hai:

6 If you watch just one brutal death-metal video from a Taiwanese power trio today … well, it would pretty much have to be this dizzying clip for Diesear’s frenzied, ferociously firebreathing monster Endless Dolour. Unless you know way more about Taiwanese death metal than I do. Which is totally possible. Though it does beg the question: Why? SAYS THE PRESS RELEASE: “Endless Dolour, inspired by the suicide, depicts the torment of souls,” says the band. “Alive or dead, pain and grief would continue on like reincarnation, with no real end.” Um, cool?

7 If you watch just one brutal death-metal video from a Grande Prairie, Alta. quintet today … well, it would pretty much have to be this punishing, green-lit parking-structure clip for Arrival of Autumn’s fearsome (and surprisingly elegant) assault Better Off Without. Unless you know way more about Grande Prairie death metal than I do. Which is totally possible. Though it does beg the question: Why? SAYS THE PRESS RELEASE: “Vocalist Jamison Friesen comments, “We are very excited to unleash our latest single Better Off Without and our album Harbinger onto the world! The response to our singles has been incredible and we can’t wait for everyone to spin this album and bang their heads!” Hopefully not while driving:

8 If you have not had the distinct pleasure of getting acquainted with Lone Star State rockers Texas Hippie Coalition, here’s a hint: Their initials will tell you everything you need to know about them. Well, almost everything: Their swaggering, anthemic new single — a preview of their forthcoming album (ahem) High in The Saddle — is titled Moonshine, after all. But it’s not the kind of moonshine you expect. SAYS THE PRESS RELEASE: “Many men throughout time have referred to their woman (sweet thang) as their sweet sunshine. Me being a creature of darkness and a lord of the night, I do all my dirty deeds under the moonlight. And when I talk about my baby girl, my sweet thang, I refer to her as my MOONSHINE…” Shine on:

9 More of Me is not just the title of Toronto R&B singer-songwriter Lydia Persaud’s latest single. It’s also precisely what you’ll want to hear once you get a taste of her soulful pipes and the song’s smooth blend of classic soul stylings. Luckily, she’ll show you plenty more when her debut album Let Me Show arrives May 10. She’s really got a thing for prophetic song titles, doesn’t she? SAYS THE PRESS RELEASE: “More Of Me is written from the perspective of being emotionally unavailable in a romantic relationship.” And being unable to use landscape view while making your video, apparently:

10 Dance music doesn’t usually make me thing about pastry. But thanks to Chicago duo Pixel Grip’s seductive new single Soft Peaks, I now have this weird picture in my head of people whipping up egg whites while cavorting under strobe lights, dry ice clouds and spinning disco balls. Unless Soft Peaks is a euphemism for something else. But I’d rather not go there. SAYS THE PRESS RELEASE: “Soft Peaks plays like a forgotten Italo disco track unearthed from a cursed, sweaty DJ booth from decades ago.” On your mark, get set, bake!

11 Industrial-tinged electro-rocker Ghostfeeder came to play. Both music and video games. The Florida guitarist (whose driver’s licence reads Derek Walborn) is such a nostalgia buff, he even uses old game controllers onstage when he performs. And judging by the snarling edge of his single Veins — a sample of his next album StarBeast — he could probably put together a decent score. In more ways than one. SAYS THE PRESS RELEASE: “Veins the single features aggressive distorted synths, dark lyrical content and an ominously simmering vibe.” Hit the button:

12 California pop outfit Easy does it — and does it much like The Beach Boys — in their enchantingly lush, harmony-laden debut single I Want to Marry You. And they might really mean that: Apparently, they all live together in a commune called Hello Forever. So don’t blame me if this song contains backward messages that hypnotize you into selling your possessions, leaving your family and joining them. SAYS THE PRESS RELEASE: “The track is an uplifting feel-good track about union and being at one with anything, even if only for a moment. The enchanting song highlights layered vocal harmonies, plucky ukulele and a charming dream-like chorus reminiscent of The Beach Boys but with modern soundscapes.”

13 Life is full of questions. Especially for Gabrielle Papillon. The Halifax singer-songwriter ponders a whole list of important topics in her deeply rich piano-ballad single, which is titled after what may be the most important query of all: What Do I Know? Believe me, I ask myself that every day. SAYS THE PRESS RELEASE: “Inspired by a cinematic-sounding piano part with a James Bond drive and the grandiosity of an Adele delivery, What Do I Know was co-written with UK songwriter Jonas Persson. Developed quickly, and refined over time (and produced by Corey LeRue of Neon Dreams), the song led Gabrielle Papillon down a path on which she realized she had the beginnings of a brand new album in her hands.”

14 Do you ever feel like your life is just a series of small acts repeated over and over? Welcome to my world. And modern classical composer Justin Wright’s inventive approach to his piece Modular Winter, a preview of his April 5 release Music For Staying Warm. SAYS THE PRESS RELEASE: “Modular Winter began as an experiment with different approaches to composing. The idea was to have a set of short, repeating patterns that could be arranged in any order and go on for any length of time. I then wrote free-flowing melodies to play on top, following the instructions – enter whenever you feel. Initially, I had about five or six patterns, but whittled it down to my three favourites and settled on a more permanent arrangement for the song.” He can say that again: