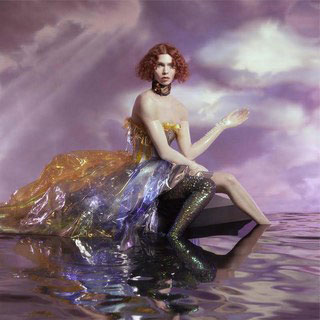 Beauty and truth come from within. Sometimes deep within. But even when they’re contained and constrained far beneath the surface of a dark exterior, they will inevitably burst forth in their own way, at their own pace and on their own terms. This is the nature of the cocoon and the butterfly, the oyster and the pearl, Scottish electro-popster Sophie and her debut full-length Oil of Every Pearl’s Un-Insides. Reflecting both its convoluted title — and perhaps its trans creator’s personal journey of self-determination — these nine meticulously crafted tracks often surround their essential truths and innate glamour with rough layers and sharp contours. For nearly every moment of uplift — a sweetly atmospheric vocal or sharp insight into gender and identity (Case in point: “I could be anything I want” from the Madonna-nod gender-bender Immaterial), there’s a corresponding element of tension and tenebrosity — be it a lurching rhythm, a crunching tone, an ominous hum or a glitchy texture. The unsettling effect somehow manages to be simultaneously expansive and claustrophobic, unburdened yet haunted, innocent yet malevolent, organically healed yet technologically damaged. With her command of mood, tone and colour, Sophie would seem to be the perfect musical match for directors like David Lynch or the late Stanley Kubrick. It’s easy to imagine her soundtracking one of Twin Peaks‘ weirder episodes or an extended version of 2001’s black-hole sequence. Not that Oil of Every Pearl’s Un-Insides is designed solely as some widescreen cinematic epic; it’s equally capable of dishing up syncopated club fare and sexual manifestos. But ultimately, the best way to experience it is not on the dance floor but reclining in the dark with your eyes closed and your headphones on, letting these songs come at you in their own way, at their own pace and on their own terms.