THE EDITED PRESS RELEASE: “The work an artist creates on the precipice of their star turn, with attention solidly focused on them … well, those are the moments that become truly magical. If ever a singularly magical moment exists in the history of The White Stripes, it is likely the release and ensuing hubbub behind their 2003 album Elephant.

As explosive initial releases are ever-deserving of further examination and celebration, it should come as no surprise that the 55th installment of Third Man Records’ Vault subscription series is the 20th anniversary collection Elephant XX. In addition to a new mono remix of the entire album on red and white LPs, this package includes a red glitter 7″ with Jack White‘s original solo demos of Elephant fan favorite Hypnotize, a DVD with never-before-seen footage from the era, and a 28-page booklet of previously unshared photos, all housed in a custom slipcase. Find the full track listing below.

The centerpiece of this set is an all new, direct-from-the-original multitrack tapes mono remix of the entire album. Mixed by Jack White and Bill Skibbe at Third Man Studio in Nashville, the work was executed on the same Calrec board used to complete the original stereo mix of Elephant at Toe Rag Studios in London back in 2002.

As these particular tapes had not been spun in nearly 20 years, little surprises and treasures slowly began to reveal themselves at every turn. An extra four bars at the end of the canonical Seven Nation Army? Completely forgotten by all involved until now. A long-lost lyric edited out of Girl, You Have No Faith In Medicine? Faithfully restored here. The snippets and snapshots of studio banter before and after takes? You bet we left it in. Revelations abound, truly gems to be discovered and dissected by die-hards and fairweather alike.

The idea here isn’t to try and completely reimagine the Elephant album. We know how near and dear it is to all of the White Stripes fans out there. The goal is to harken back to other similar experiments (like our first-ever Vault package, Icky Thump mono) while shedding light on the nuance and craft contained both in the performance and the mix of this album. In homage to the original U.S. pressing of the album, Elephant mono is pressed on opaque white and opaque red discs.

Additionally, we’ve included Jack White‘s original solo demo of Hypnotize in two markedly different mixes. It was recorded on four-track reel-to-reel sometime in 1998 and “gifted” to the local Detroit garage band The Hentchmen as a song White felt was more in their style than his at the time. Come a few years later, with the Hentches having done nothing with the tune, Jack reclaimed it for he and Meg, and their frenetic take quickly became a long-standing fan favorite. Furthermore, the original, first-take version of You’ve Got Her In Your Pocket, done seemingly as a mic check, is paired here on the flipside of Hypnotize, complete with additional flourish and fingerpicking more so than what ended up on the final album version. All three of these aforementioned songs are shared together on a stunning 7-inch single pressed on glorious glitter red vinyl.

It wouldn’t be a 20th anniversary collection without a DVD and here we’ve assembled a corker. Elephant-Era Video Artifacts is a simulacrum of the dubbed and traded VHS mixtape compilations that were pivotal to sharing of information and fueling fandom long before YouTubers begged you to smash that subscribe button.

The footage includes the exact album take of Jack and Meg and Holly Golightly singing their hearts out so jolly on It’s True That We Love One Another and a previously buried multi-camera Japanese live performance of a wild show kicked off with an impromptu cover of The Stooges’ I Wanna Be Your Dog. From the insightful, unseen interview with Jack and Meg (she talks a lot!) through beautiful 8mm film capture of the behind-the-scenes and making of The Hardest Button To Button music video, the collection here utilizes variety to convey the breadth and reach that The White Stripes covered in their dogged work supporting Elephant.

Tying it all together is a 28-page 12″ x 12″ booklet chock-full of previously unshared photos from the Elephant album cover shoot, candid backstage pics and all sorts of handwritten lyrics, concert posters, proposed/abandoned tracklists, blood chits, shopping lists, scraps of paper with Támam Shud written on them … you know, the works. 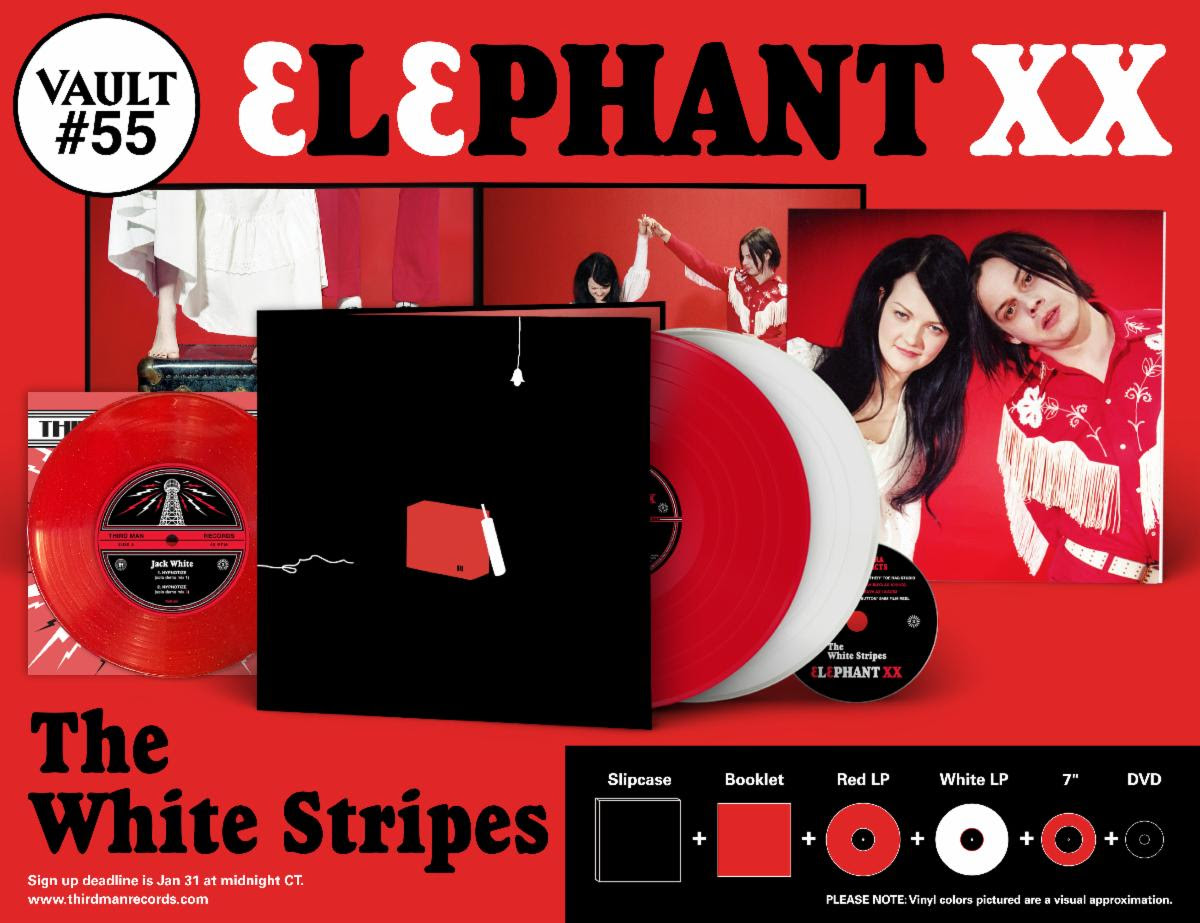 1. Seven Nation Army
2. Black Math
3. There’s No Home For You Here
4. I Just Don’t Know What To Do With Myself
5. In The Cold, Cold Night
6. I Want To Be The Boy To Warm Your Mother’s Heart
7. You’ve Got Her In Your Pocket
8. Ball And Biscuit
9. The Hardest Button To Button
10. Little Acorns
11. Hypnotize
12. The Air Near My Fingers
13. Girl, You Have No Faith In Medicine
14. It’s True That We Love One Another
All songs newly mixed in mono by Jack White and Bill Skibbe