One man’s comedy is another man’s social commentary. Especially if those men happen to be David Cross and Jello Biafra. 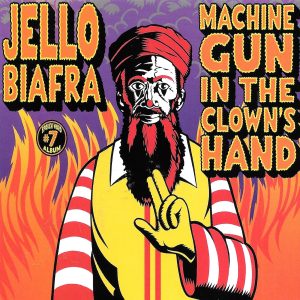 Ostensibly, Cross (the former Mr. Show star) is a standup comic while Biafra (the former Dead Kennedys singer) is a spoken-word performer. But on their new albums — a two-disc set from Cross and a three-CD box from Biafra — sometimes it’s hard to tell the difference. Both spend a lot of time bitching about Dubya’s War on Terror, picking apart America’s knee-jerk post 9/11 patriotism, maligning the media, griping about greedy corporate crooks and ripping apart rednecks. And both do so with acerbic wit, razor-sharp insight and a fearless conviction.

Of the two, Cross would probably be more fun to spend quality time with — the unbridled absurdity and gleeful vulgarity he brings to taboo subjects like bestiality, religious sex abuse and the execution of retarded inmates mark him as the most subversive comic since the late Bill Hicks. Biafra, meanwhile, is more of a stern conspiracy theorist, leaving no sacred cow untipped as he exposes the hypocrisy at the heart of our society, along with sound advice for how to avoid taking part in it. Still, anybody who titles a political monologue Captain Cornholio and the Sunshine State clearly has his sense of humour very much intact.