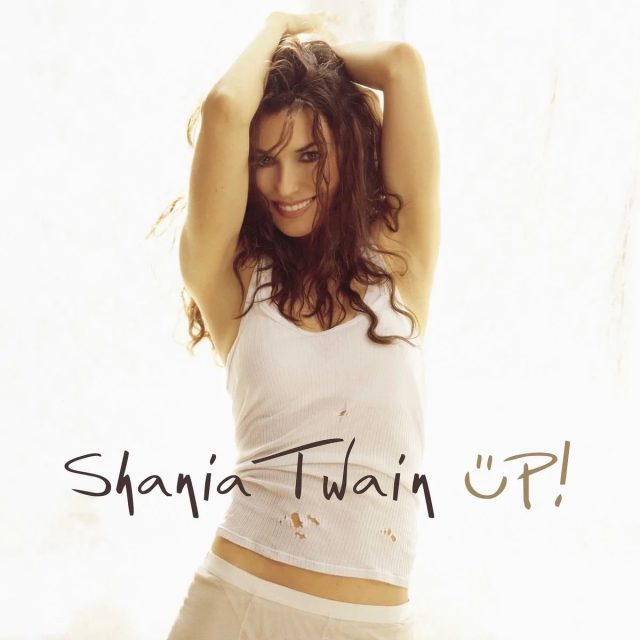 Up? She’s gotta be kidding. Really, how much further up can Shania Twain’s life and career get?

She has one of the top-selling records of all time. She’s married to one of the world’s most famous hit-making producers. She lives like royalty in a freakin’ castle in Switzerland, for crying out loud. So let’s face it: There’s only one direction left for Shania to go, and that is downward. Oh, it doesn’t have to happen overnight. It can start with something small — like, say, an album that just doesn’t quite cut it.

And sadly (or happily, depending on how you feel about Shania), the ridiculously optimistically handled Up! is that album. After the mega-mondo-success of 1997’s Come on Over — which is still on country charts five years after its release — we can see how Shania and hubby Mutt Lange could have felt pressured to outdo themselves. So instead of a dozen or 15 tracks, they jammed it to the brimg with 19 songs. Instead of making one version, they’ve mixed three — a “red” version of poppy mixes (read: electric guitars, synths and beatboxes), a “green” version of rootsier takes (read: fiddles, banjos and mandolins), and “blue” mixes available online. And, if it isn’t obvious by now, instead of worrying about quality, they thought quantity would do the job. It doesn’t.

Overproduced, overwritten, overdone in every sense, Up! is an album that manages to be densely jam-packed and echoingly hollow at the same time. Cliche-riddled, target-marketed pop anthems like I’m Gonna Getcha Good!, It Only Hurts When I’m Breathing and Waiter! Bring Me Water! are so impeccably crafted, so immaculately produced, so completely devoid of any grit or soul or personal insight or honest emotion that they sound untouched by human hands (and, judging by the lack of credits in the disc, perhaps were). Shania, for her part, still has a great voice. Too bad she still seems to think that adding an exclamation point to the end of a semi-literate song title (Nah!, Ka-Ching!) is a sign of sincerity and artistic commitment. I’d be lying if I said the album doesn’t have its moments — though quite frankly, now that I’ve listented to it, we can’t remember a single one.

Ultimately, sitting thorugh the two-disc edition of Up! is the equivalent being locked in an elevator for 146 minutes with the Muzak cranked. By the end, all you want is to turn it down.