Home Read Albums Of The Week: The White Buffalo | Year Of The Dark... 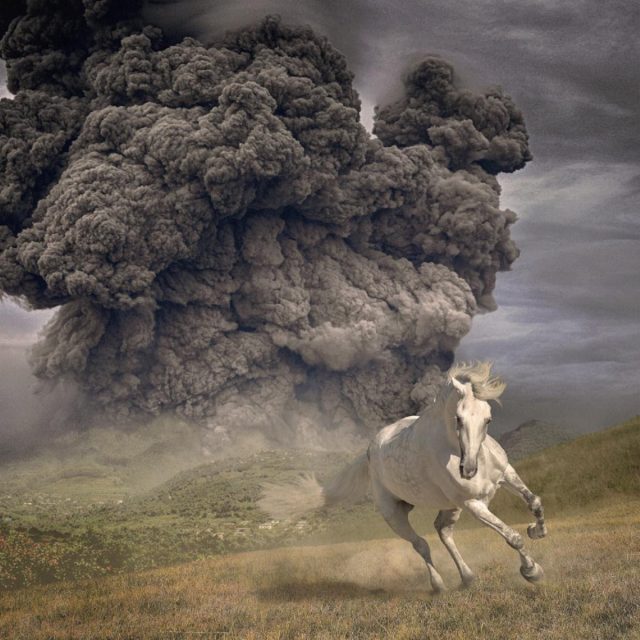 THE EDITED PRESS RELEASE: “For The White Buffalo — aka Oregon-born, Southern California-raised singer-songwriter and guitarist Jake Smith — it was time to take the less-travelled path; to assemble notions for studio album No. 8, the followup to On The Widow’s Walk and embark on a voyage of discovery. Out with the old, the organic, the expected, the tried; in with the new – new producer, new studio, new location, no distractions, no looking back. Enter Year Of The Dark Horse …

“You think we’re a country band? A folk band? Americana? Rock? What the fuck are you gonna say now?!” laughs Jake. “With this album, I wanted something outside of what I’ve ever done. I wanted to open up. Do something dangerous. I’m hard to put into a singular genre as it is, but now I really wanted to take away any kind of preconception or pigeon-holing. And don’t ask me, cos I don’t know what it is! It’s a genre-bending thing — there’s elements and influences from ELO, Daniel Lanois, Tom Waits, The Boss, circus, pirate music, yacht rock, and I’m driving and pushing some of these numbers in a way I’ve never done before.

“At the top of the pandemic, I put the acoustic guitar on its stand, got a synthesizer and began writing on it, not really knowing how to play keys, just exploring the different sounds and landscapes. In the not knowing, it allowed me to expand my vocal melodies and compositions in ways the guitar had possibly limited.” 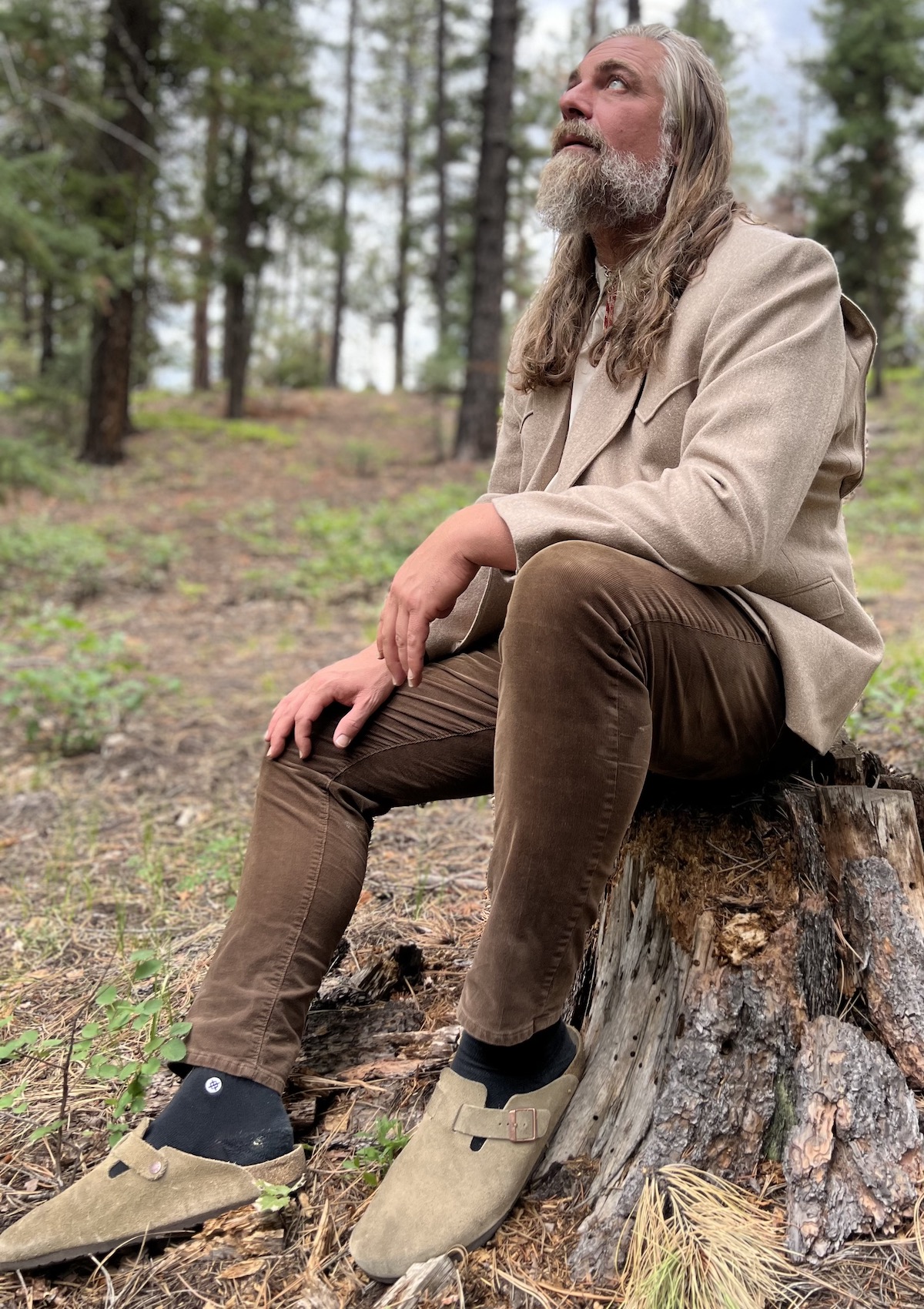 When Jake, flanked by regular touring / recording compadres, bassist / keyboard player / guitarist Christopher Hoffee and drummer Matt Lynott, crossed the threshold of East Nashville’s Neon Cross Studio, a converted Southern Baptist church, he wasn’t chapter an’ verse prepared, as usual. The time before recording had been a crazy one, so there were a bunch of loose ends to be tied (“I’m a perpetual procrastinator”), plus only three of the 12 songs had been completely written. Jake had maps in his head, but most were mere bones of compositions with only a few key lyrics penned. This allowed producer / studio owner Jay Joyce — plus trusted engineer Jason Hall — the wiggle room to really get involved, to guide and explore new frontiers.

“It was a whirlwind of creativity,” recalls Jake. “We tracked 12 songs in 11 days; no over-thinking, no looking for perfection, no egos, no playing it safe, just feel, and I’ve never had a producer act so much like a producer — twisting, elevating and contorting our talents!”

With an impressive clientele numbering Eric Church, Brothers Osborne, Fidlar, Ashley McBryde, Halestorm, Carrie Underwood, Miranda Lambert, Little Big Town and Cage The Elephant, to name just a few, multi-instrumentalist Joyce has a reputation for working at an intense level. He’s a Grammy-winning producer, has four CMA Awards (two for Single Of The Year, two for Album Of The Year) and five ACM Producer Of The Year Awards (a record), and when it comes to making music, the Ohio native is never one to take the obvious route — perfect for an album featuring a dozen musical vignettes, individual yet constant in flow; an album loosely based around the shifting of the seasons and the shifting of a relationship; an album showing off the complete scope of Jake’s song-writing craft, from the stripped back to the fully loaded.

“Jake is fierce, he basically wrote a whole movie,” says Jay. “We holed up in an old church, in the midst of the pandemic. It was just the four of us, making the soundtrack to his movie, and I have to say, it was inspirational.” 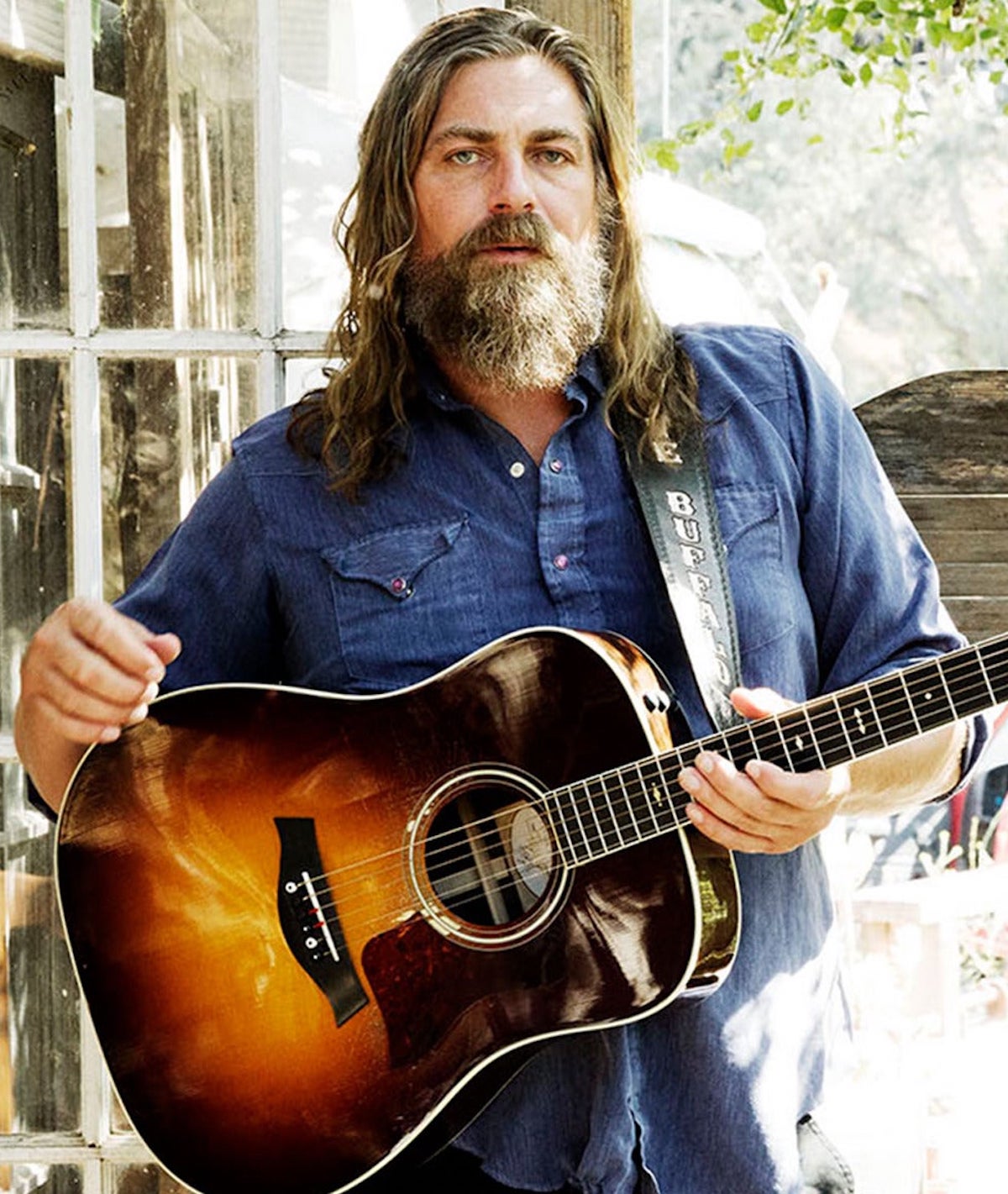 To keep the storyline as clear as possible, the 12 songs were recorded in sequence, with every square inch of Neon Cross brought into play; a new sonic palette was required, a unique set of sounds, and if it meant pushing the musicians into new, sometimes uncomfortable, areas, well, that was the price to pay. “Oh, he would break at least one of us on the daily!” exclaims Jake. “At some point, we all questioned if we could even sing or play! We’d start at 11, have lunch at 1 or 2, be done by 7, and we felt like we’d gone to war!! Exhausted, our heads spinning. Like, what did we even do today?!

“A lot of stuff was tracked on the fly, and Jay would help guide arrangements, bridges, links, all sorts of things, then he ended up adding other elements in the mix to bind it all together. He’s an insane musician and he would change things on a dime. We’d spend an hour getting a drum tone, then he’d say, ‘Sounds amazing, but any fool can make a drum kit sound good.’ So he’d abandon all of that, and end up using a $50 child’s kit mic’d with a singular microphone and pump it through a tiny Marshall amp. His mind works in a manner I’ve never witnessed in anyone else!”

But what about the vocal recording? Surely Jake’s signature baritone, a much-revered calling card, required nothing more elaborate than a candle-lit corner, some honey, cigarettes and coffee. “Not reallyl!” laughs Jake, “he kept putting me in strange and awkward positions — on two or three of the songs, he sat me down on a low-profile couch, with the mic a foot off the ground, so I’m hunched over singing with my knees higher than my head. He was taking away my body, my power. He’d say, ‘Everyone knows that you can sing, bro, what else is there?’ He was looking for a vibe, a cool factor, not vocal acrobatics.

“And he’s meticulous about trimming the fat, and about syncopation, where the words are landing. He would also sense if something wasn’t quite working, or if it was getting repetitive; on Love Will Never Come he forced me to abandon the vocal melody and lyrics I had prepared, nearing 100 words, saying it sounded like, ‘Hickory Dickory Dock. I’m bored after hearing that melody twice’. He made me take an entirely different approach, on the spot, like, ‘Make up something cool. Now! GO! GO!’ I’ve never been challenged like that before! The first thing that spilled out of me was the map for that performance. He’s a fucking genius with a splash of bullying ex-wife. You know he’s right, you trust him, and he will push you beyond what you think you’re capable of.” 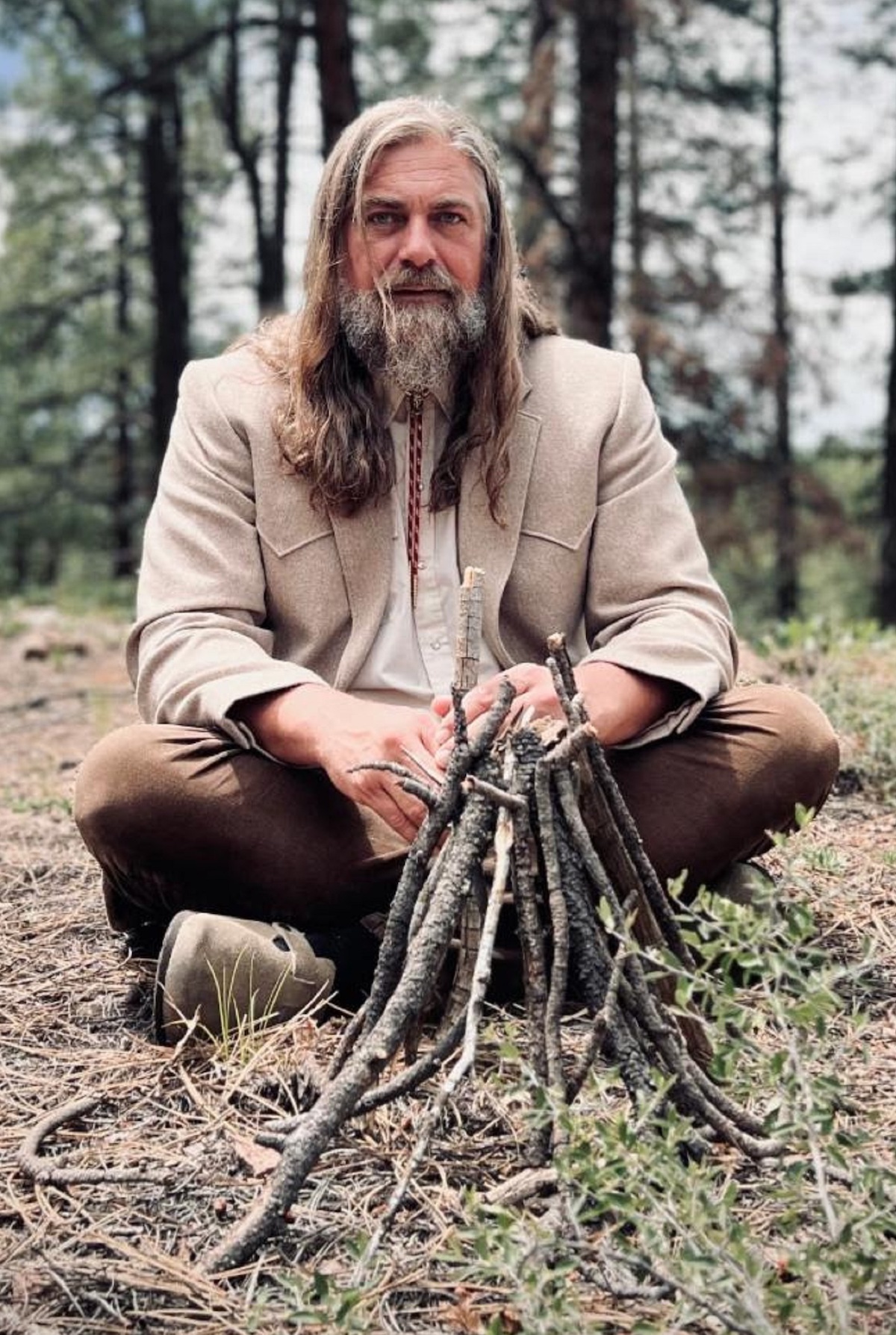 For Year Of The Dark Horse to achieve its full potential, Jake knew the experience had to be immersive, which is why the Nashville location proved crucial. Not only were the three musicians away from the lures of home, but the house they all stayed in was just a block from the studio, and filled with a variety of instruments. Wherever they were, they could hone in on the project, and some of the songs came together while the clock was ticking. “I wrote Love Song #3 eight days into recording,” remembers Jake. “I knew the story and the scope of the album needed a true love song, so I wrote one from a melody I had swimming around in my head.

“I work strangely well under desperate conditions,” he continues, making sure to give credit to his fellow musicians, his ‘band of brothers’. They hadn’t heard the songs at all prior to entering the studio, “coming in blind,” but they collectively stepped up to the plate, and beyond, sometimes getting a tune out of instruments they’d never even heard of!

As for Jake, he was happy to embrace a project where new boxes were being ticked on a daily, sometimes hourly, basis. This time around, it was all about building on glories past, adding fresh, exciting, more left-field moments to a style and a sound that has seen his music growing in stature worldwide, supported by key placements in the worlds of TV and film (Sons Of Anarchy, Californication, The Punisher, The Terminal List, etc.).

Over the years, Jake has built a second-to-none reputation for the emotional weight of his music, and here this core element dramatically underpins a body of work that allows the imagination of the listener to play an important part throughout, building on a tale of debauchery (of the drunken variety) and blame, of love and loss, a life lived against the odds, the whole thing set in one lunar year, following our anti-hero through the highs and lows of the seasons. 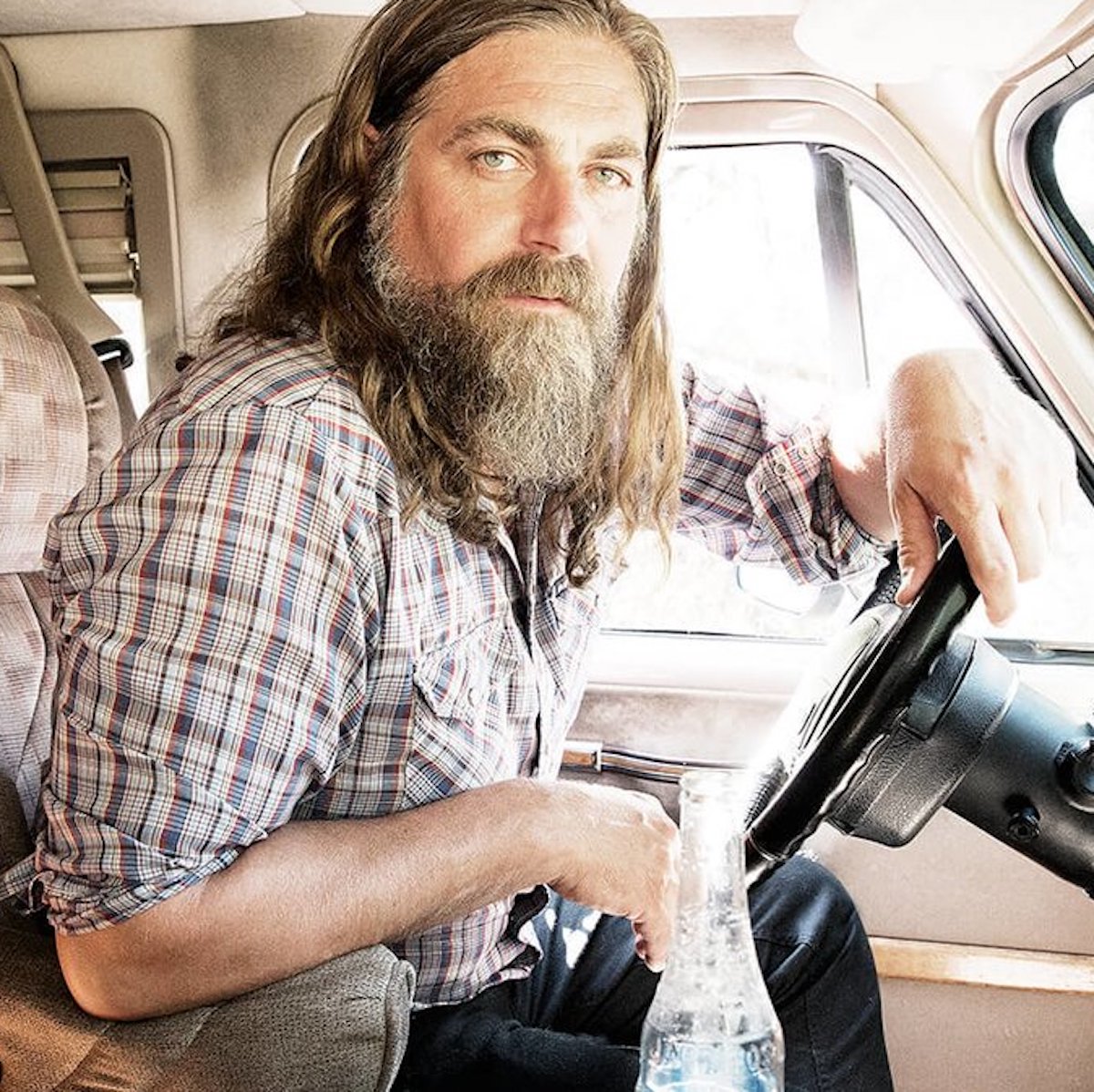 And who is this mysterious Donna? And what was she doing in the bar? And in the bathroom?! (She Don’t Know That I Lie). She’s right there at the heart of the action, and the song that bears her name is probably the most propulsive on the album — an open display of Jake’s deep regard for the great Jeff Lynne. “During the pandemic, I would ride around on my bike with a speaker on the back, tripping balls, and listening to ELO,” he recollects. “I love Jeff Lynne!”

Hard on the stiletto’d heels of Donna comes album closer Life Goes On, which bring things to a conclusion in gentle, reflective tones. Jake felt his way through the song in the studio, then when he stepped up to do it for real, was told by Joyce that his first take was ‘the one.’ “He wouldn’t let me have another crack! ‘You can’t beat that!’ One single imperfect take when I wasn’t even aware we were recording. Pure, honest, true.”

Which effectively sums up YOTDH as a whole. It’s The White Buffalo’s most unpredictable and inventive work to date, the most well-rounded, too — surprising, spontaneous and spectacularly genre resistant. Year Of The Dark Horse: Normal rules do not apply.”