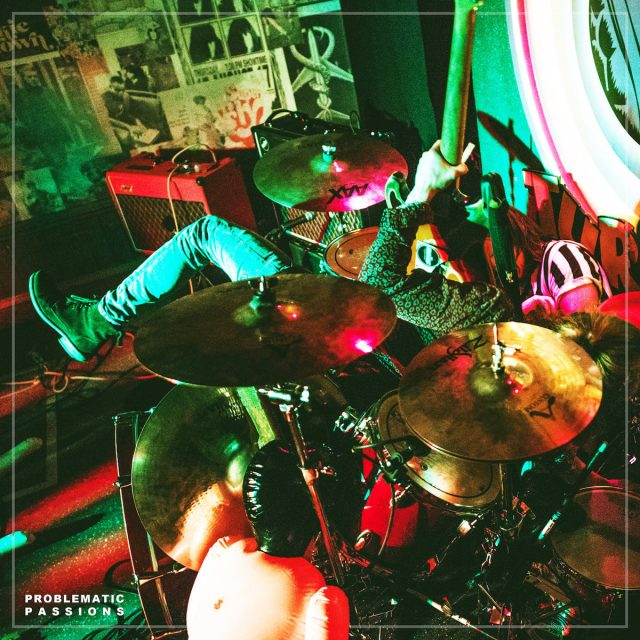 THE EDITED PRESS RELEASE: “U.K. rock band Mellor’s self-produced album Problematic Passions is eardrum-shattering just like good rock should be. Packing a heavy punch, Problematic Passions’ strength multiples with every strum of the axe. Chipping plectrums and snapping guitar strings, Mellor deliver a sequence of blistering records, each with its own sinful story to tell.

“One of our biggest concerns of recording an album in the past was the studio costs and the desire to experiment and tinker with ideas as much as possible,” Mellor say. “We decided to invest in a home studio and learn how to engineer as we went. Fully aware we could be sacrificing a crisp, polished sound, we wanted that live, raw feel and knew we’d love the freedom of snaking in and out of all the songs we had in the making.

“Jake Day has done an impeccable job of mixing the songs and working with us to find the personality of the album. Although not a true concept album, it has a recurring theme of the bad things people do or get themselves into. A problematic passion could be anything from drugs and stealing to manipulation and money troubles.”

Conceptually rich, their single and live video Gargoyle Groove explores the twists and folds of the human mind. Thrashing with insanity and stunning audacity, it builds ever towards a dangerous climax before plummeting off a sheer cliff, leaving behind a trail of crushed distortion. “We’ve been playing and developing this song even since before Covid,” Mellor say. “It was one of the tracks that certainly set the tone for the album. It’s about a psychiatrist who gets a kick out of making people think they’re more ill or insane than they really are. Which is about as dark and manipulative it gets. The thing we love most about this track is the whole verse is just pedalling one chord, but the variants and melody around it meant Gary didn’t have to do anything else, it sounded great.”

Swiftly rising in the U.K. music scene, Mellor have received spins on BBC Radio, recently finished their national tour, performed at the Isle of Wight Festival — jamming on the same stage as Biffy Clyro and Noel Gallagher — and played the independent Truck Festival along with Wolf Alice, Foals, and Two Door Cinema Club.”