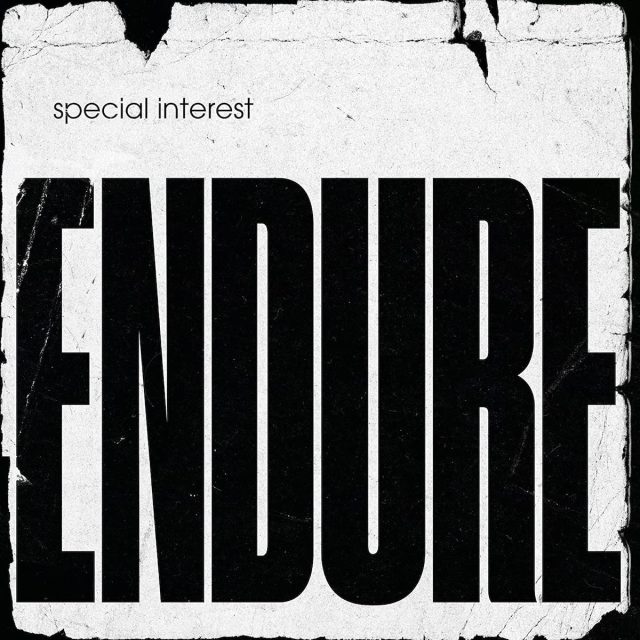 THE EDITED PRESS RELEASE: “Endure, the third album from New Orleans no-wave punks Special Interest, makes it clear they are uncompromising on every level: In their adventurous sound, in their high-energy live performances and in their convictions. Dance music and punk culture have flirted in the warehouse before, but Special Interest’s desire to dismantle genre is informed by a larger abolitionist worldview that resists constraint, category, and conformity. Their music is a soundtrack to dancing the pain away as much as raging against the machine.

Special Interest describe the experience of recording Endure as “inverted,” since the pandemic obviously stunted the possibilities of live performance, resulting in a new period of experimentation and sonic exploration in which old rules were cast out. Everything the group writes springs from the same source — a hard-hitting drum-machine beat — but the possibilities are endless and the outcome always unpredictable. Ruth Mascelli’s work on drum machines and synthesizers provides a foundation, as varying beats lead the group into different directions: rave-ready drum and bass or ballroom-like house on the more dance floor-friendly cuts, and marching kicks on No Wave-inflected tracks like Foul. Cherry Blue Intention brings together a sturdy post-punk bassline, shrieking guitar effects, and a jungle breakbeat into a driving anthem of an opening track.

The new songs recall the art rock of Sparks and The B-52’s as much as politically-minded punk, and on Midnight Legend, the group are more overtly pop than ever before — making something fun during a time of frequent sadness became a central priority. But that doesn’t mean anything is simple or surface-level, with a darkness often treading beneath the smooth production. For as much as the band play with dissonance, Maria Elena’s expressive guitar work and Nathan Cassiani’s grooving bass lines effortlessly weave together, and shade out the soundscape brought into existence by Alli Logout’s commanding vocal presence. Collaboration is central to the band’s creative process, and it’s difficult to imagine even one element from the whole of Special Interest subtracted from the equation. Their songs are living organisms, open to the possibility of experimentation and interpretation, but also not the property or creation of any one person.”