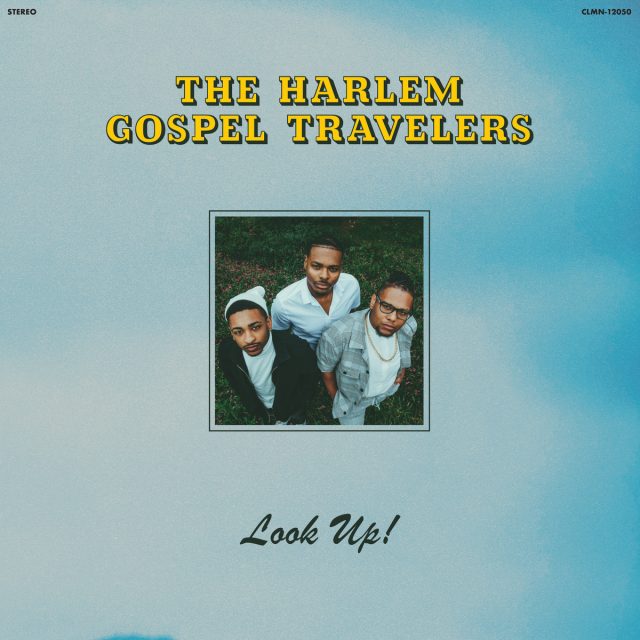 THE EDITED PRESS RELEASE: “Things are looking up for The Harlem Gospel Travelers, who return here with a new album, a new lineup, and a new lease on life.

Produced by Eli Paperboy Reed, Look Up! marks the group’s first full-length release as a trio, as well as their first collection of totally original material, and it couldn’t have come at a more vital moment. The music still draws deeply on the gospel quartet tradition of the ’50s and ’60s, of course, but there’s a distinctly modern edge to the record, an unmistakable reflection of the tumultuous past few years of pandemic anxiety, political chaos, and social unrest. The songs are bold and resilient, facing down doubt and despair with faith and perseverance, and the performances are explosive and ecstatic, fueled by dazzling vocal arrangements punctuated with gritty bursts of guitar and crunchy rhythm breaks.

Born out of an non-profit music education program led by Reed, The Harlem Gospel Travelers — singers Thomas Gatling, George Marage and Dennis Bailey — released their debut LP He’s On Time to rave reviews in 2019. The record charted on Billboard, earned the Travelers high-profile fans like Elton John (who invited them to appear on his Rocket Hour radio show), and landed them festival slots everywhere from Pilgrimage to Telluride Jazz.

It’d be easy to classify Look Up! as “retro” or “vintage,” but the truth is that the young men of The Harlem Gospel Travelers aren’t just reviving sounds from the past, they’re revitalizing them for the present and reminding us just how relevant this music is (and always has been) in times of hardship and uncertainty. “Gospel’s at the root of everything,” says Gatling. “Country, folk, rock, soul, blues; we love it all, and it’s all in there.”

Gatling and his fellow Travelers were all familiar with gospel music to one degree or another growing up, but it wasn’t until their introduction to Reed that they began to learn about the rich history of the gospel quartet and timeless groups like The Soul Stirrers, The Dixie Hummingbirds and The Swan Silvertones. In high school Gatling and Marage were participants in a non-profit music education program known as Gospel For Teens, which invited kids from all over New York to come to Harlem and sing after school.

“I was invited to visit the program and I thought it was great,” says Reed, “but it was all choir music. I asked if they’d ever consider doing a quartet program for young men, and they told me they’d love to but they didn’t have a teacher.” So Reed became the teacher, working with five or six teenagers at a time for semester-long programs focused on widening the students’ perspective of what gospel music could be and tapping into the true power of their voices. Participants came and went over the years, but some stuck around and began to suggest the kind of talent and ambition that reached beyond a simple after school program.

“George and some of the guys in the group began to age out of the program; I realized we needed to get them into the studio,” Reed says. Thus, The Harlem Gospel Travelers were born, with Bailey (a college friend of Gatling) joining the group after the release of He’s On Time.”