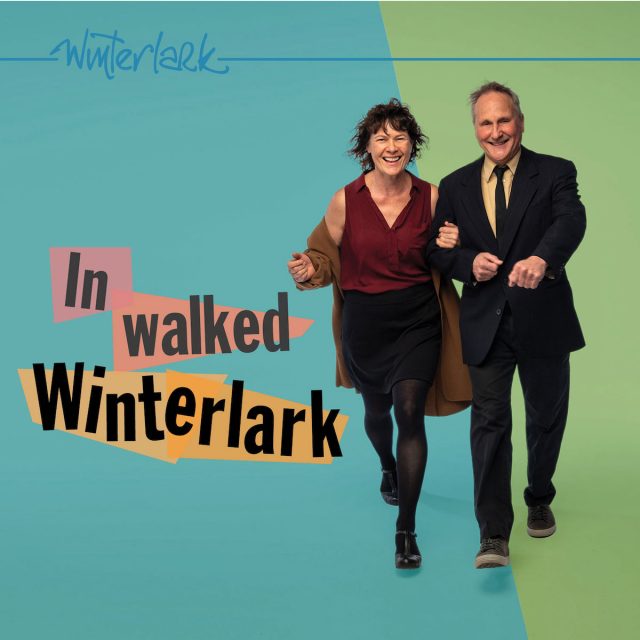 Winterlark kick up their heels and step lively on their sharp and sophisticated new EP In Walked Winterlark — showcasing today on Tinnitist.

Breezy, bluesy, bittersweet and beguiling, the six-song In Walked Winterlark exhibits a maturation in songwriting and a deeper connection between Santa Cruz acoustic folk-jazz singer-songwriters Kristin Olson (upright bass) and Sweeney E. Schragg (guitar) as instrumentalists and vocalists. “We don’t have a TV, so we just play tunes at night,” Sweeney explains. Kristin cracks: “Some people do crossword puzzles.” The EP also boasts a more collaborative spirit as each brought a sibling in to contribute to the sessions — Sweeney’s brother adds some fleet-fingered bluesy acoustic leads, and Kristin’s sister lays down some nuanced and soulful percussion. The EP was recorded at Blue Coast Studios and produced by Cookie Marenco, a Grammy-nominated producer at Windham Hill Records and an innovator in direct stream digital recording.

In Walked Winterlark’s standout tracks include Stick Around Blues, Automobile Radio, Daring Mary and the single In Walking This Away, which finds the duo toss banter around like a modern-day George Burns and Gracie Allen. Stick Around Blues swaggers through classic blues changes with sexy bass lines and tongue-in-cheek lyrics about the annoying inability of “certain individuals” to stay put. The lyrics here, at times, ooze innuendo, as when Kristin sings: “He’s handy with tools and it’s widely renowned / But I adore that man so why won’t he stick around?”

With Automobile Radio, Winterlark sneak in a swing tune under a pop veneer as smooth as Steely Dan. This song delves into a little bit of autobiography from Sweeney about his formative years spent with restless, vagabond parents in the back of a Buick, listening to AM radio stations from all over the U.S., coming and going with the mile markers. The final turn in the lyrics captures the sadness for a lost way of life as well as the hope that Winterlark clings to: “Now my automobile drives itself, yeah, and where this music comes from I don’t know. But looking in your eyes, I can see horizons, I can hear my radio, my automobile radio.”

Kristin’s very personal Daring Mary delves into a story arc about a sympathetic hard-luck character who too easily finds adversaries, real and imagined, while mixing up wrong and right. “The two individuals who inspired this fictional Mary,” Kristin says, “are still scrapping their way through life, both daring souls dared by circumstance.” The insistent bass riff was the original nexus for this song. Sweeney filled gaps in the fictional narrative and added his carefully vetted chordal compliment. One powerfully telling passage reads: “Sixteen years of waiting tables / Worn shoes and tired bones / Five teenage girls sat laughing / The loudest was her own / Life after methadone — daring Mary / She did it for the kid.”

From the diverse musical influences of the San Francisco Bay Area, Winterlark have landed on an urban folk musicality that blends literate lyrics; bossa nova and soul rhythms; and the harmonic, melodic, and improvisatory traditions of jazz. With In Walked Winterlark, the duo now have three recordings on Squink Records, including the 2019 full-length When Does Love Go South? and the 2021 EP, When I Saw You Stranded There.

Listen to In Walked Winterlark above and below, and keep up with Winterlark at their website, Facebook and Instragram.