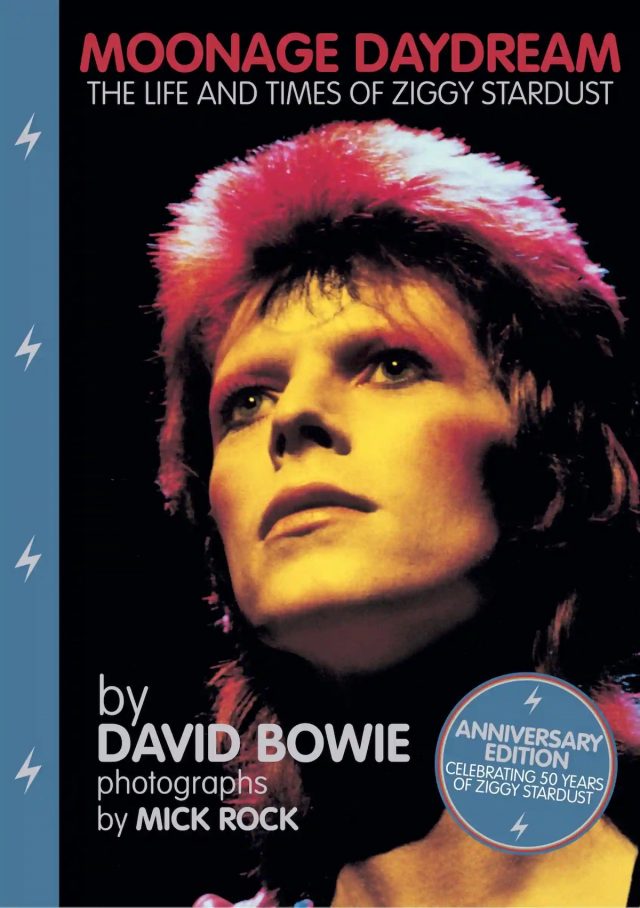 Bowie, Beethoven, Badfinger, Bad Company and Bob. Next week’s books are a bunch of B-words. Read all about ’em: 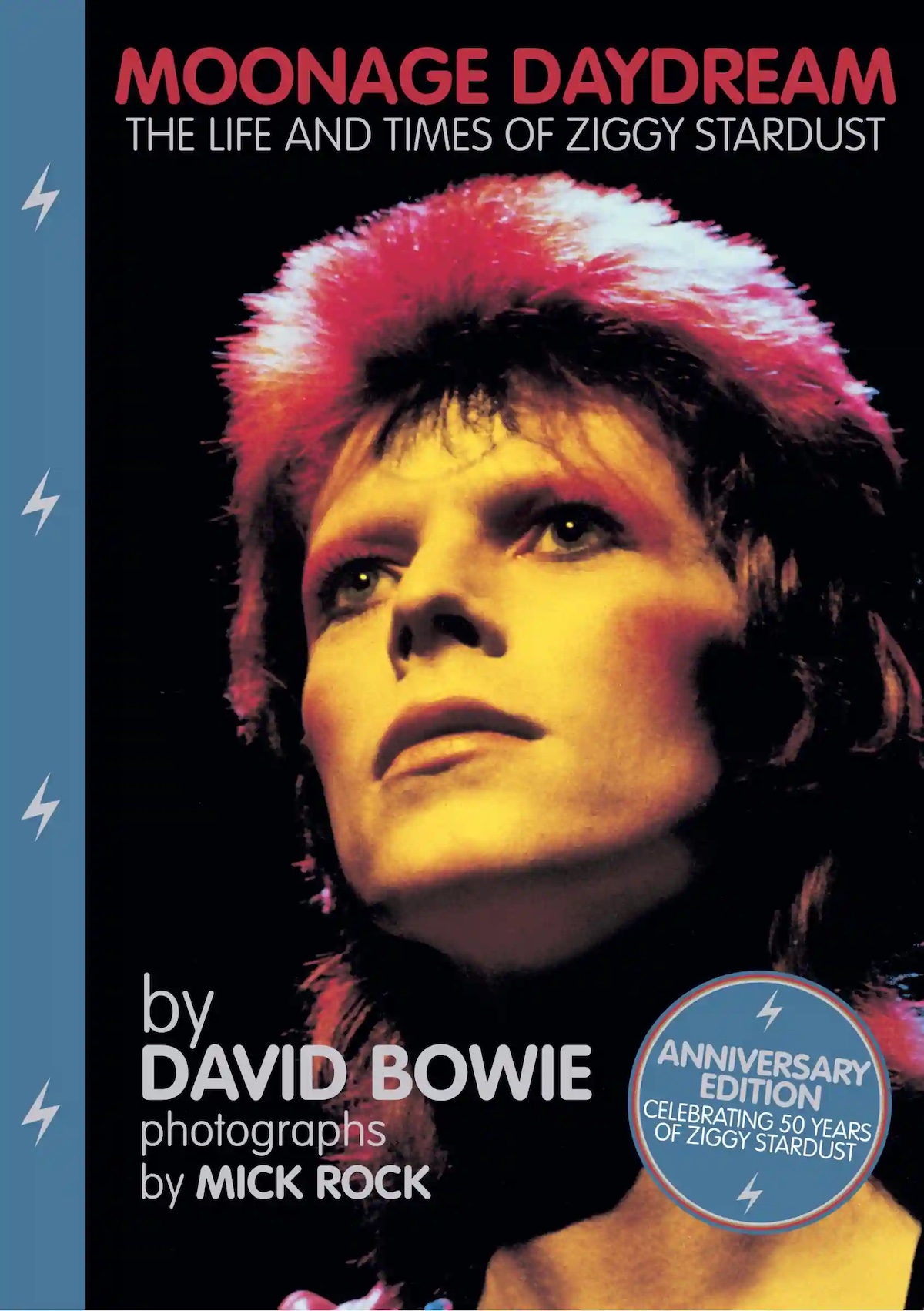 THE EDITED PRESS RELEASE: “In 1972, David Bowie released the instant classic The Rise and Fall of Ziggy Stardust and The Spiders from Mars — a record without which any list of the all-time greatest abums is simply incomplete. 1972 would be the year that Bowie ascended to international superstardom. The summer of 1972 saw him serve as producer on two classic albums: Lou Reed’s Transformer — a landmark record in New York City’s musical history that spawned the surprise left-field hit Walk on the Wild Side — and the vastly influential proto-punk glam fusion of Raw Power by Iggy & The Stooges. As if his 1972 weren’t full enough, Bowie also produced Mott the Hoople’s All The Young Dudes, for which he wrote the hit title track. The U.S. Ziggy tour began in September ’72, with sold-out shows full of stunning costumes taking inspiration from Japanese theatre to interstellar sci-fi, snarling guitars courtesy of Mick Ronson, and a daring approach to performance that propelled the audience into a rock ’n’ roll fervour for their otherworldly messiah. By spring of 1973, Ziggy had circled the world, hordes of kids from London to Japan shearing their hair into rooster cuts and clomping to Suffragette City in their new platform heels. Bowie just as abruptly laid Ziggy to rest on June 3, 1973. Amidst the throes of Ziggy fever, Aladdin Sane was released in April 1973, inspired by Bowie’s experiences in America while touring and featuring The Jean Genie, Panic in Detroit, Drive-In Saturday, Cracked Actor and of course its namesake track with its frenetic Mike Garson piano solo. After putting the Stardust show to bed, he travelled to France to begin work on his next albums. Bowie’s extra-terrestrial rock-star creation Ziggy Stardust staged one of the most spectacular and innovative live shows to date, expanding the parameters of the live rock show and singlehandedly launching a worldwide glam explosion.” 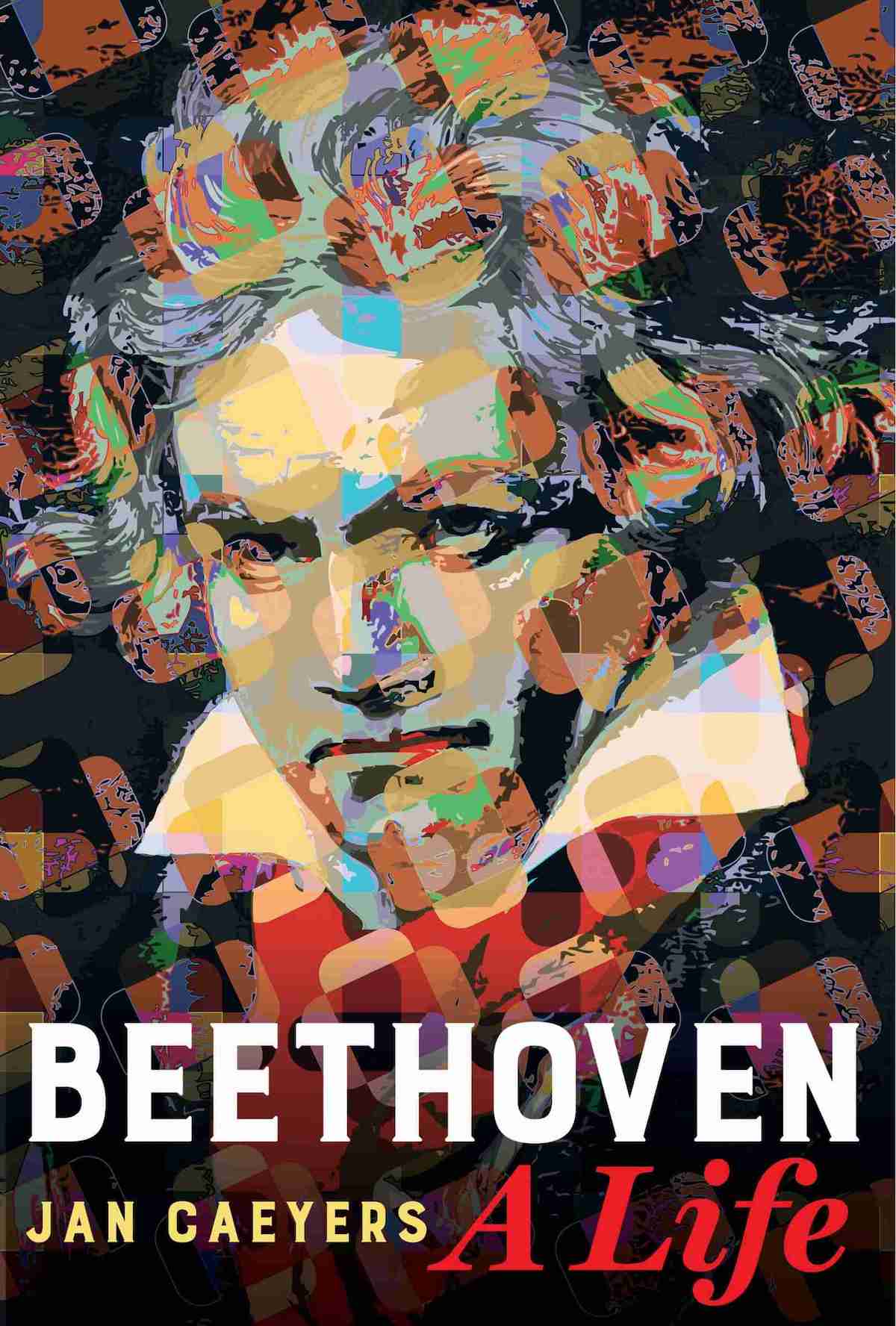 Beethoven, A Life
By Jan Caeyers

THE EDITED PRESS RELEASE: “With unprecedented access to the archives at the Beethoven House in Bonn, renowned Beethoven conductor and scholar Jan Caeyers expertly weaves together a deeply human and complex image of Beethoven — his troubled youth, his unpredictable mood swings, his desires, relationships, and conflicts with family and friends, the mysteries surrounding his affair with the “immortal beloved,” and the dramatic tale of his deafness. Caeyers also offers new insights into Beethoven’s music and its gradual transformation from the work of a skilled craftsman into that of a consummate artist. Demonstrating an impressive command of the vast scholarship on this iconic composer, Caeyers brings Beethoven’s world alive with elegant prose, memorable musical descriptions, and vivid depictions of Bonn and Vienna — the cities where Beethoven produced and performed his works. Caeyers explores how Beethoven’s career was impacted by the historical and philosophical shifts taking place in the music world, and conversely, how his own trajectory changed the course of the music industry. Equal parts absorbing cultural history and lively biography, Beethoven, A Life paints a complex portrait of the musical genius who redefined the musical style of his day and went on to become one of the great pillars of Western art music.” 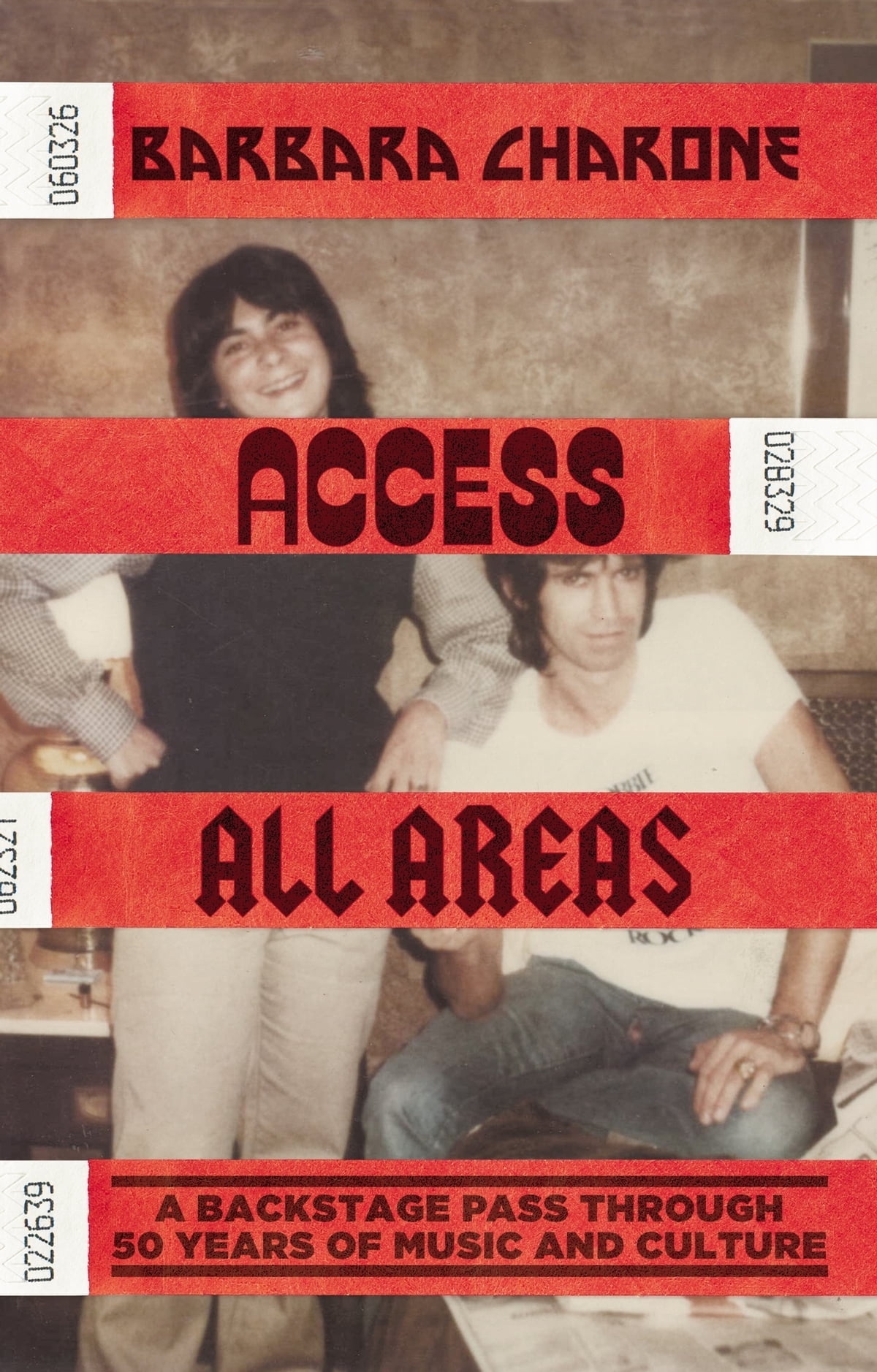 Access All Areas: A Backstage Pass Through 50 Years of Music And Culture
By Barbara Charone

THE EDITED PRESS RELEASE: “First as a journalist and then a publicist at Warner Brothers Records for nearly 20 years, Barbara Charone has experienced, first-hand, the changes in the cultural landscape. Access All Areas is a personal, insightful and humorous memoir packed with stories of being on the cultural frontline, from first writing press releases on a typewriter, then as a press officer for heavy metal bands, taking the bus up to Donnington Festival with coffee, croissants and the much more popular sulfate. To taking on Madonna, an unknown girl from Detroit, and telling Smash Hits ‘You don’t have to run the piece if the single doesn’t chart’, and becoming a true pioneer in music, Charone continues to work with the biggest names in music, including Depeche Mode, Robert Plant, Foo Fighters and Mark Ronson at her agency MBCPR. The story of how a music-loving, budding journalist from a Chicago suburb became the defining music publicist of her generation, Access All Areas is a time capsule of the last 50 years, told through the lens of music.” 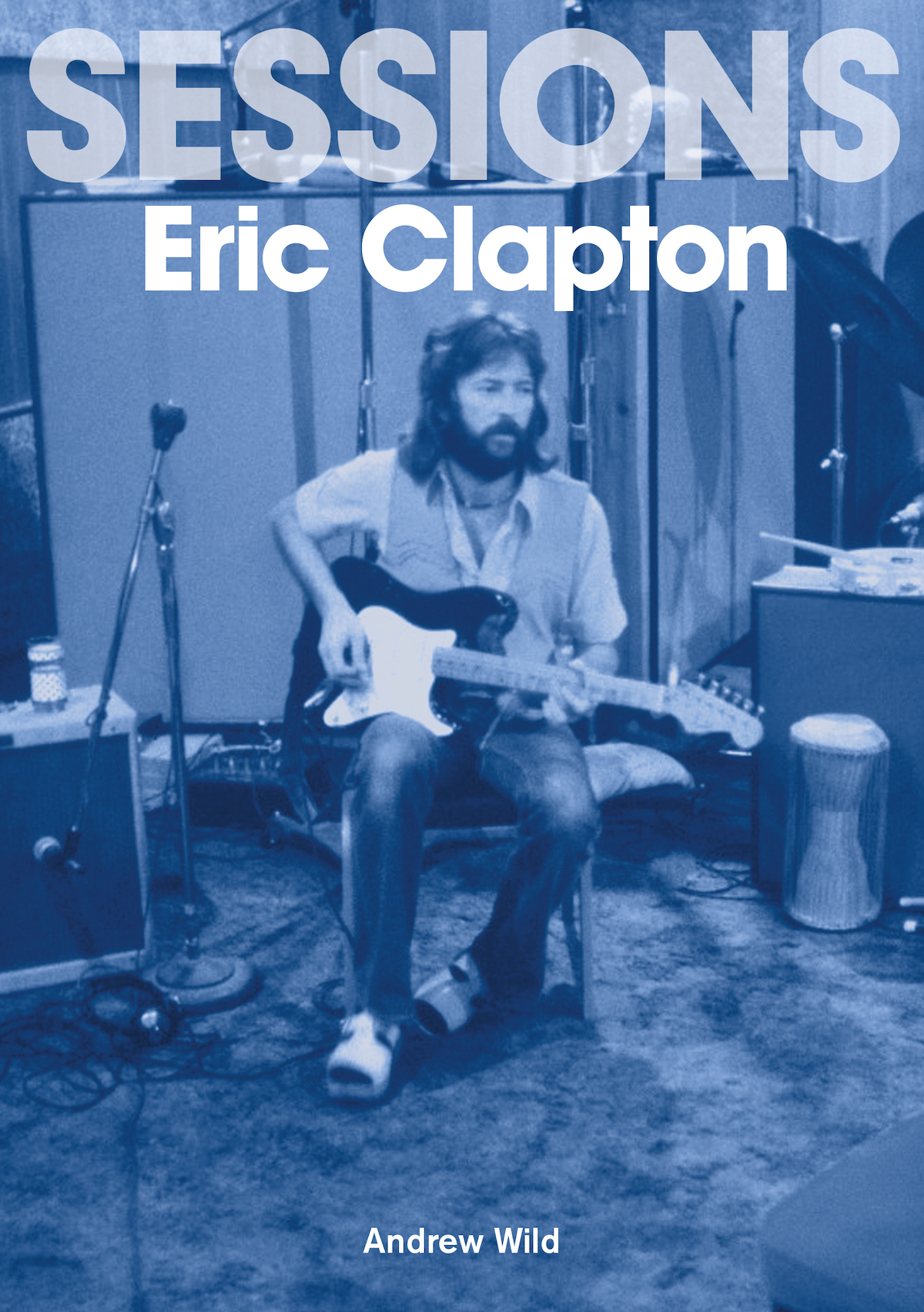 THE EDITED PRESS RELEASE: “Since 1963, Eric Clapton has contributed to 200 albums by other artists: from very famous to the obscure and the unexpected: Bob Dylan, Aretha Franklin, The Rolling Stones, Sting, Phil Collins, Rod Stewart, all four of The Beatles, Martha Veléz, Jonathan Kelly, Corey Hart, Stephen Bishop, Hawkwind, Ray Charles, Kate Bush, The Tony Rich Project, Toots and the Maytals and Mary J. Blige. If you’ve never heard (for instance) Beat of the Night by Bob Geldof, Sexual Revolution by Roger Waters or I Wish It Would Rain Down by Phil Collins, this book tells you about Eric’s part in those recordings and many more — including Ed Sheeran. Indeed, this book puts these into context across nearly 60 years of documented sessions. If you’ve never delved into Eric’s contributions to other artist’s recordings, then this is a handy guide to help the reader find his way into such a lengthy and successful second career. If his own albums are the main story, then these recordings run alongside: an alternative history of one of rock’s most prolific musicians.” 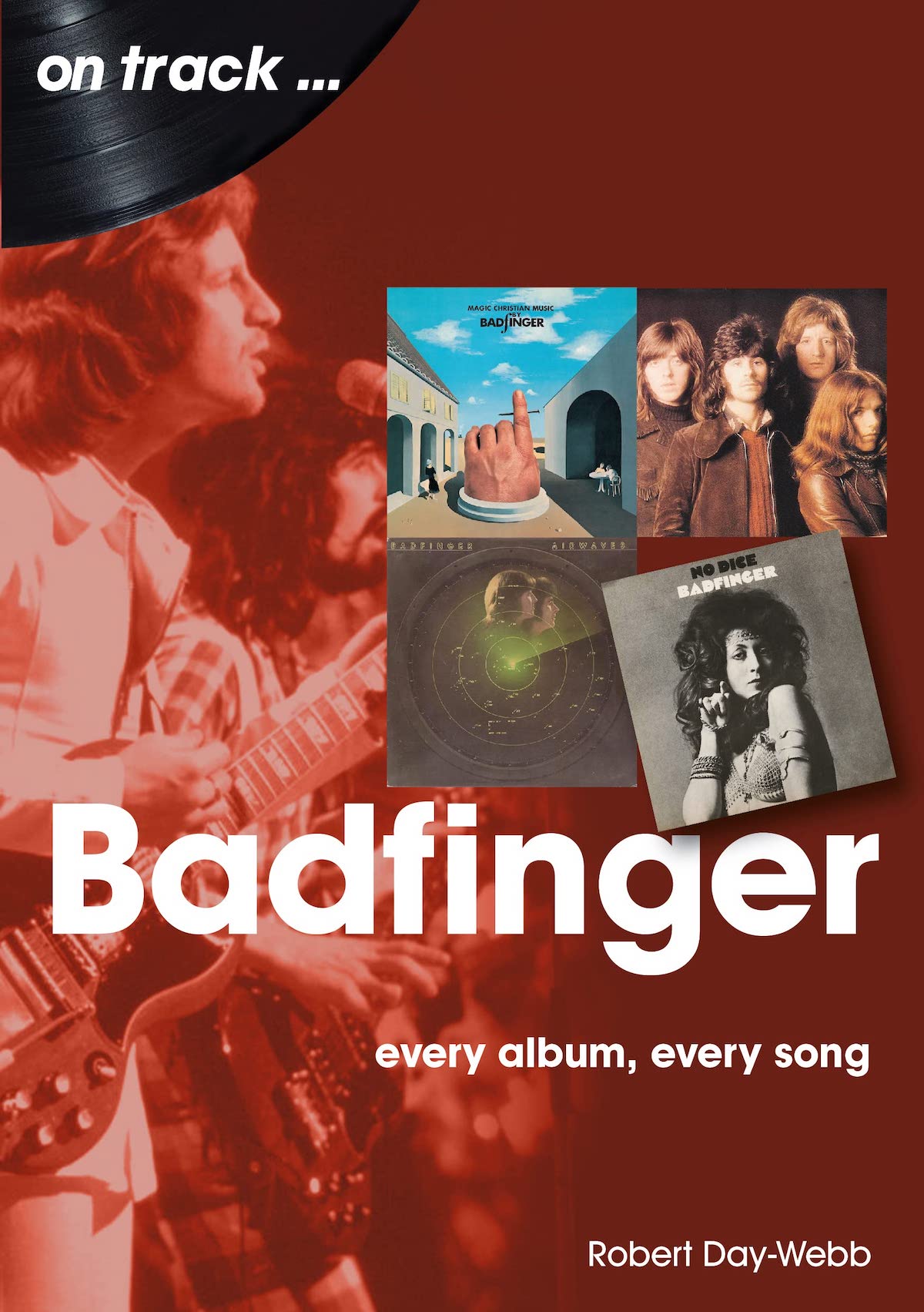 Badfinger: Every Album Every Song
By Robert Day-Webb

THE EDITED PRESS RELEASE: “Generally regarded as one of the most tragic tales in the history of rock music, the story of Badfinger does indeed make for an impressively sombre Hollywood-style film script. A Welsh and Liverpudlian musical hybrid, the band was signed to Apple Records, became protégés of The Beatles, produced four global hit singles and two of its members co-wrote the now perennial pop standard Without You (covered most notably by both Harry Nilsson and Mariah Carey). Yet, despite all this and having the music world seemingly at its feet, the band found itself plagued by ruinous misfortune and through a combination of unscrupulous business management, record label neglect and just plain bad luck, the dream soon lay in tatters with the band’s story ultimately culminating in the suicides of two of its members, Pete Ham and Tom Evans. However, there is a lot more to the band’s story than just the obvious tragedy and the aim of this book is to help redress the band’s legacy and refocus some much-needed attention on the brilliance of their music, rather than just the trials and tribulations that perpetually dogged them. Badfinger: Every Album, Every Song casts a keen critical and analytical eye over the band’s entire musical output — albums and singles — recorded and released during its lifetime. This detailed and definitive guide will not only examine and assess the recordings but will also provide valuable background history and context for each album. Whilst not ignoring the managerial, financial and legal machinations and issues that blighted the band, this book will ultimately focus the spotlight on the band’s musical legacy.” 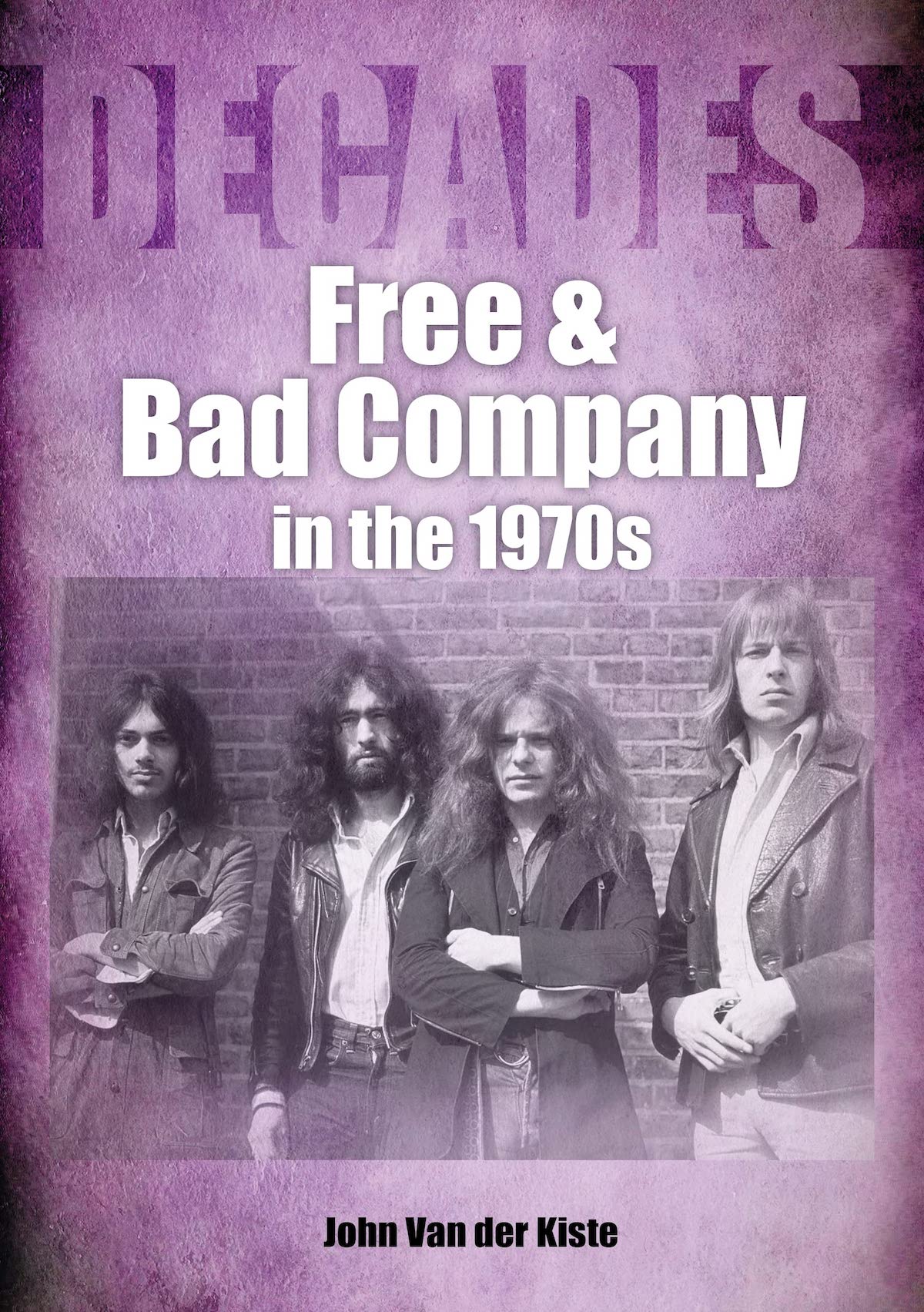 Decades: Free and Bad Company in the 1970s
By John Van Der Kiste

THE EDITED PRESS RELEASE: “Free were formed in 1968 towards the end of the British blues boom. After two critically acclaimed albums, the release of All Right Now and the album Fire and Water in 1970 brought them major success. Musical and personal differences took their toll and they split after the comparative failure of their next album and single. After starting new bands that never took off they reformed, but following further dissension and guitarist Paul Kossoff’s drug problems they disbanded for good in 1973. Vocalist Paul Rodgers and drummer Simon Kirke then formed Bad Company, who became one of the hottest bands on both sides of the Atlantic, maintaining a stable lineup with ex-Mott The Hoople guitarist Mick Ralphs and ex-King Crimson bassist Boz Burrell for the rest of the decade. Each member later pursued outside ventures, although they regrouped at intervals, recruiting new members after Ralphs’ retirement and Burrell’s death. This book examines both bands’ work and career from 1968 to 1980, plus Kossoff and Kirke’s Rabbit album, Kossoff’s solo work and Back Street Crawler, with a chapter on their later history, notably Rodgers’ three years with Queen.” 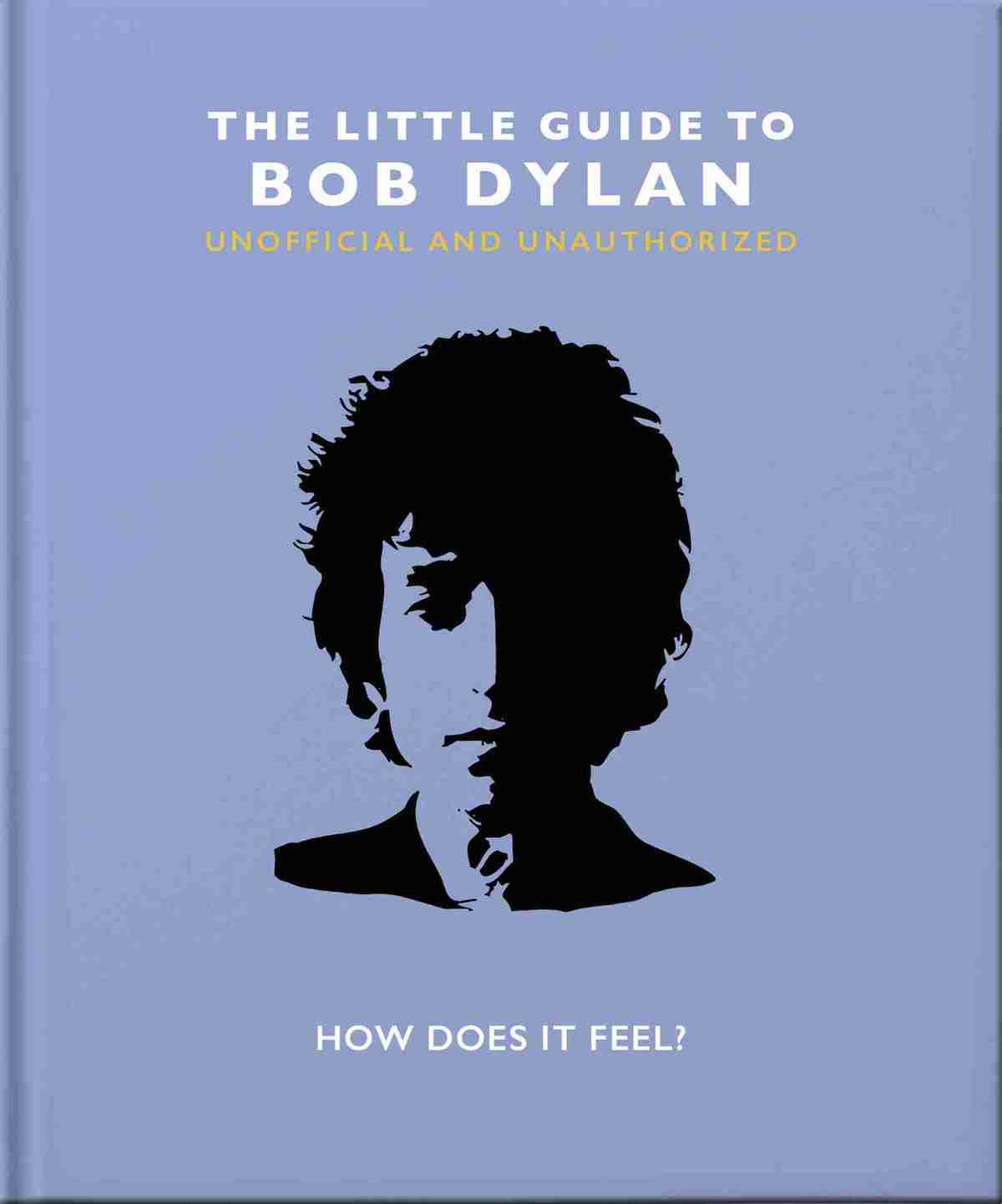 The Little Book of Bob Dylan
By Orange Hippo!

THE EDITED PRESS RELEASE: “The many sides of Bob Dylan are revealed in this collection of the artist’s words and lyrics. Having celebrated his 80th birthday in May 2021, with plaudits given around the globe, this influential if enigmatic troubadour-poet has been a-changing with the times since the 1960s when he was the ‘voice of a generation’. Nobel and Pulitzer prize-winner, musician, artist, author and actor, the living legend’s words in lyrics and in real life have inspired, enthralled, provoked and puzzled generations of fans, literary buffs, musicians and songwriters — and have been mulled over by academics and artists alike. This collection of quotes — humorous, grave, desperate, passionate, fearless, surreal — includes a rich tapestry of confessions, admonitions, laments, prophecies and existential meanderings. Interspersed with fascinating facts, The Little Book of Bob Dylan sheds light on the deep inner workings of this taciturn man and his music.” 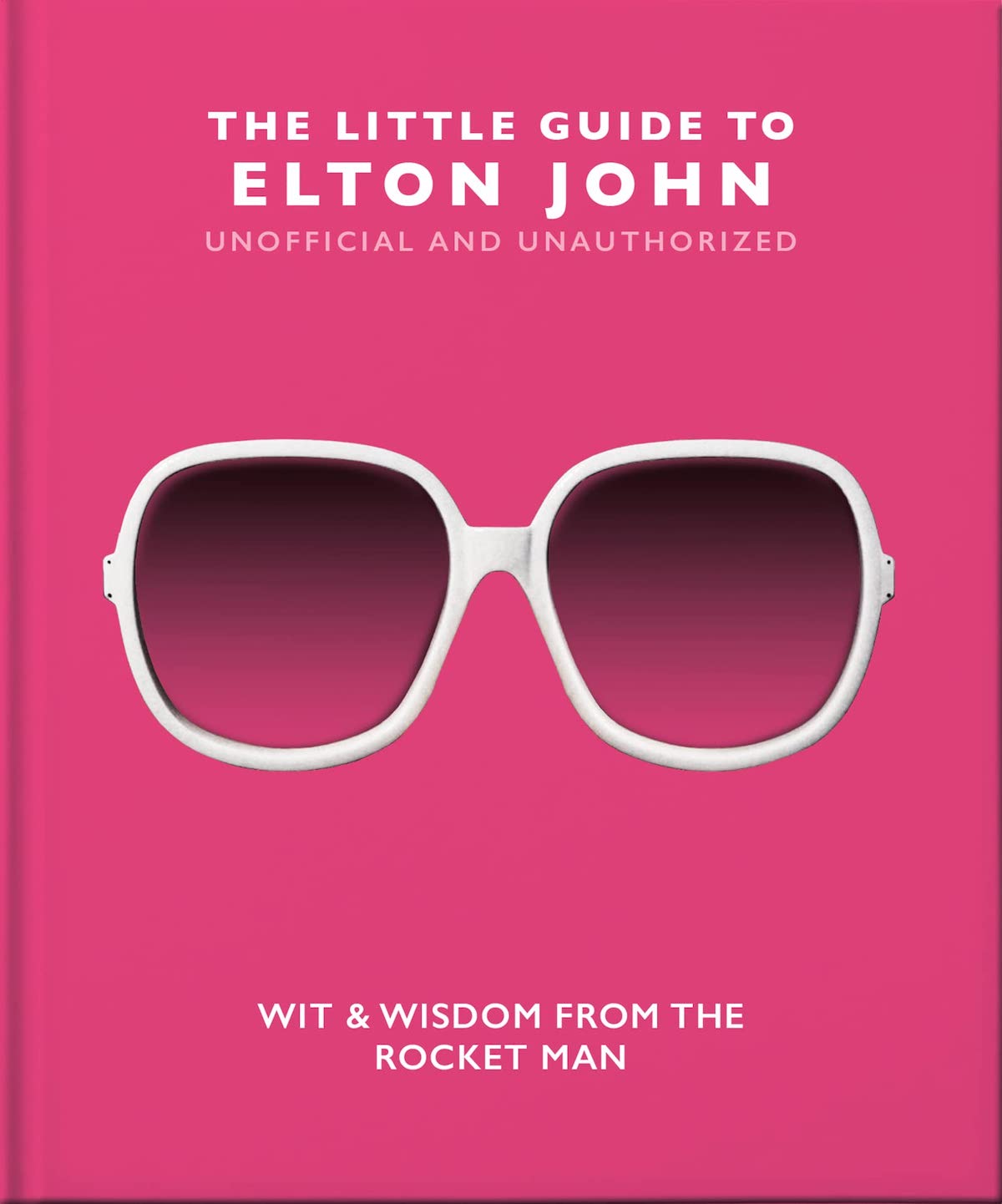 The Little Guide to Elton John
By Orange Hippo!

THE EDITED PRESS RELEASE: “Sir Elton Hercules John has enjoyed a phenomenal career filled with success, excess and achievement. His farewell tour was announced as more than 300 dates across all corners of the glode for years. Illness, Covid-19 and other extenuating circumstances conspired to prolong it, but the Farewell Yellow Brick Road Tour concerts have sold out everywhere as fans take their opportunity to see this unique artist for possibly the last time live on stage. The Little Guide to Elton John celebrates the career, music and character of one of the most interesting, colourful, engaging and interesting popular musicians ever. The book reviews his career and countless highs, and recognizes his many record breaking achievements, in music, in his charity work and farther afield.”