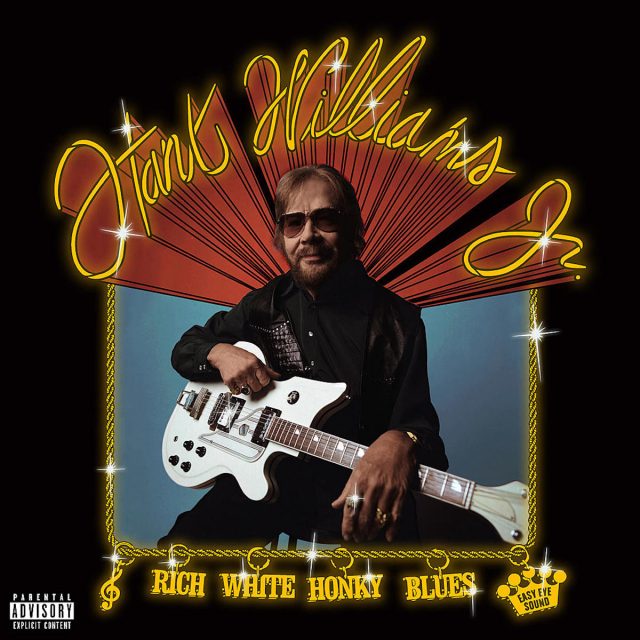 THE EDITED PRESS RELEASE: “Larger than life, capable of summoning “all his rowdy friends” with a couple of crashing downbeats and a blaring guitar riff, Hank Williams Jr. has been one of country music’s truest outlaws for over half a century. But more than the swaggering singles, roughneck fantasy videos or relentless sense of blue-collar boogie, at his core, the 72-year-old legend is a bluesman. Pure, unqualified and unadulterated, the only son of Hank Williams has the same down low lonesome in his veins as the man Rufus “Tee-Tot” Payne taught to play guitar as a small child growing up in Greenville, Ala.

With Rich White Honky Blues, the second-generation Country Music Hall of Famer makes good on his legacy with a turpentine and rough wood take on the hill country blues that informed his father’s raw-boned style of putting his pain out there. Grammy-winning Producer of the Year Dan Auerbach recorded the set live over three days, with a dozen songs reprising classics from Robert Johnson, Lightnin’ Hopkins, R.L. Burnside, Muddy Waters, Big Joe Turner and a few from Bocephus himself. “The blues is where it all comes from,” concedes Williams. “It’s the start of everything musical in my family; everything starts with Tee-Tot and flows from there. I’ve always flirted with this stripped back blues — all the way back to the ’80s. But I finally made an album that’s just that, and I like it.”

Blame it on the owner of Easy Eye Sound. Auerbach went straight to the essence. Assembling a wicked core band of electric slide guitarist Kenny Brown (claimed as “my adopted son” by Burnside), bassist Eric Deaton (who first toured with Fat Possum’s Juke Joint Caravan, backing up T-Model Ford and Paul “Wine” Jones), plus drummer Kinney Kimbrough (son of North Mississippi blues legend Junior Kimbrough), they tapped into the lifeblood of the blues at its most randy. Whether it’s the climbin’ and tumblin’ turn on Lightnin’ Hopkins’ My Starter Won’t Start with its easy groove, the tantalizing slow burn take on Muddy Waters’ Rock Me Baby, with the sound panning left and right, or the strolling guitar and thumping stripper backbeat and sapphic surprise Short Haired Woman, matters of the flesh are metaphoric and literal, carnal and explosive. 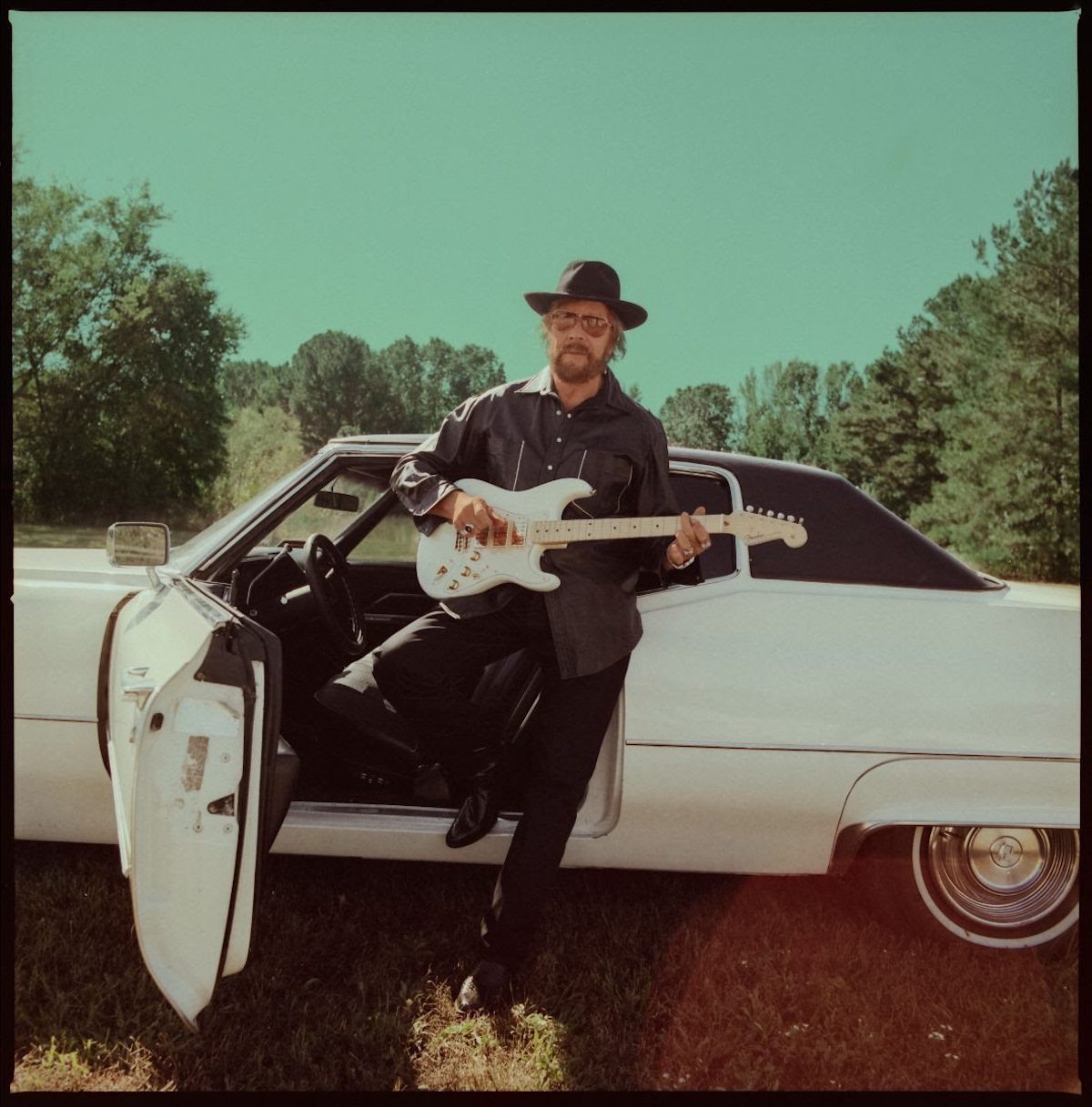 No apologies, no excuses: It’s a ribald romp through conjugal matters that define this record. With “explicit” labels on several songs, this is the real — and it’s brought to tape with the immediacy of musicians in a circle, feeding on each other’s spark. Even the three-time Academy of Country Music and two-time Country Music Association Entertainer of the Year was cutting live behind glass, locking in with the combustion on the floor.

It started with a phone call, discussing what these sessions could be. Nothing definitive, no commitments made. But then Auerbach started receiving text messages the week leading up to the dates: pictures of Hank Williams Jr. stationery, each with the title of a song he wanted to sing. Back and forth. Songs. Influences. Touchstones to draw upon. And then it was Day 1. “First thing he said to me when he walked in was, ‘I don’t really feel like fucking with this shit!’ ” Auerbach recalls. “And he walked into another room.”

Undaunted, the producer had the band start playing; grindhouse blues, sweltering hill country shuffles, juke joint altar calls. Before too long, the man whose alter-ego is Thunderhead Hawkins emerged, curious and hungry. “If you wanted to play this kind of music, you couldn’t have better players,” Auerbach explains. “The first time I ever saw Hank Jr. on TV, I was a kid raised on Robert Johnson and Hank Williams Sr. records, and those things came through so clearly watching him. So, I tried to assemble the right parts to just sit in that piece of who he is.”

From the vocal and gut-string bounce of .44 Special Blues (based on Johnson’s 32-20 Blues), caught on the fly and viscerally gutting the betrayal and consequence rejoinder to a cheating woman, Williams’ vocals are potent, earthy, brash and lascivious. The tang of sex, the scent of arousal, the thump of reprisal makes for an urgent entry point. With Burnside’s pulchritudinous Georgia Women and the electric guitar slab and stab Fireman Ring The Bell, plus the chicken-scratching burn of Turner’s metaphoric TV Mama, the delectability is greasy, trenchant, built to slather on a too-hot Saturday night.

And those vintage nuggets set the stage for Williams’ own songs, songs Auerbach didn’t see coming. “It’s that rawness, and how real it is. I was always searching for the rawness, the darkest stuff. Once we were in it, as soon as we started playing, Hank was invested. That lifted everybody else up, to really push each other. When we were doing Georgia Women, I loved hearing him holler like that. When he steps up and opens his mouth, you’re in the juke joint. I literally thought he was going to blow up my Neumann mic, because when he’s in a room, he’s booming. And then came I Like It When It’s Stormy. They were all covers up ‘til that point, but he was having such a good time, I think he wanted to bring some of his own songs to the table, too.” 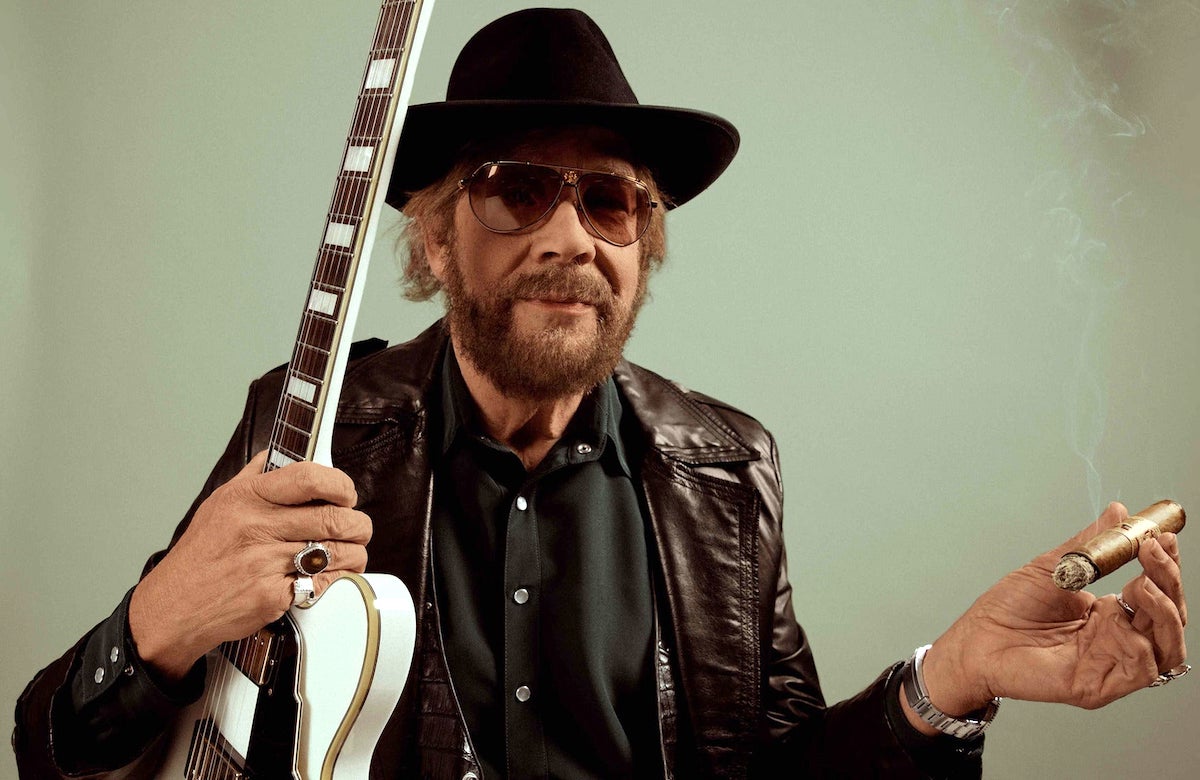 A minor-key tempest with a touch of smoke recalling The Allman Brothers Band’s debt to the blues, Stormy faces down the rugged breaks and bad women who show a man his mettle, while the vamping My Name Is Bocephus redux Call Me Thunderhead throttles poseurs and pretenders to not just his throne but Williams’ famed blues doppelganger Thunderhead Hawkins. ZFG en fuego, Thunderhead slices into the bodacious, braggadocious electric blues that’s as much molten Chicago as North Mississippi’s finest. “You bring who you are,” Williams says, chuckling. “All that — all of that — is where my music comes from. When we got into the studio, the more we played, the deeper we got — and the deeper we got, the harder I wanted to go. Those songs just fit the moment.”

The syncopated title track, with its blaring electric guitar and rubber bassline, may be the most Bocephus of them all. Making the blues an equal opportunity proposition, not just the outpost for the destitute and downtrodden, Rich White Honky Blues twines good sex and being cut off as the howling leveler of men regardless of circumstances, as well as serving as a roll call of the artists who twisted him into the man he is today. “It is what it is,” Williams adds, still laughing. “You know, that’s the thing. Blues is what it is — and whoever you are, there’s a dose with your name on it. You can let it knock you down, or you can stand up and play the guitar, witness to what happened and throw down hard to get rid of it.”

Throw down they did. With a cloud of dust and blood-stained fingers, Williams and co. flew through the profane, slammed the pockets deeper and arrived at a summit that’s his birthright. Culminating with Hopkins’ Jesus, Won’t You Come By Here, an ambling invocation, Rich White Honky Blues ends with a prayer for redemption after so much hedonism and regressive delight. Humble, Williams invites the Savior to bring whatever grace He might have, to sow solace and forgiveness in the wake of all the squalid, freeborn revelry. With Brown’s electric guitar, Auerbach on dobro and Bobbie Wood’s churchy piano and organ, the weathered baritone has a robust conviction that suggests the larger than life amongst us transcend mortal limitations.

It’s a long way from the primal taunt of .44 Special Blues, marked with a declarative punctuating “I hope you got all of that. I bet YOU did. I’m going to listen — and smoke” through the graphic, startling, industrial strength carnal declarations to a final invocation of something holy. Yet if you set out as Auerbach, Brown, Deaton and Kimbrough intended, it’s the inevitable ending to music that burns so hot and lands so blisteringly wild.”