Home Read Albums Of The Week: Aptera | You Can’t Bury What Still Burns 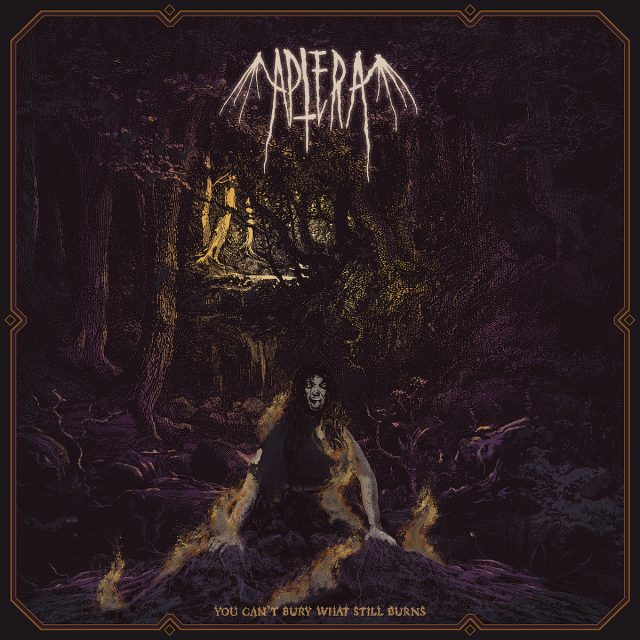 THE EDITED PRESS RELEASE: “Emerging in the realm of dark and heavy music, Aptera’s full-length debut You Can’t Bury What Still Burns conveys a variety of raw emotions with fury and mettle — pure creative urge never compromised by a need to stick to one genre. From classic metal to psychedelic rock, from doom to punk and even black metal, every track brings the listener into a different sulphurous and crepuscular sonic land.

Hailing from Brazil, Italy, Belgium and the U.S., Aptera have risen from the sea to join forces in Berlin. In Greek mythology, Aptera was the site of the legendary contest between the sirens and the muses. After the victory of the Muses, the Sirens (who in Greek mythology are creatures with the body of a bird and the head of a woman) lost the feathers from the wings on their shoulders and cast themselves into the sea. The word “aptera” in Greek literally means “without wings.” The incarnation of Aptera is not one of defeat, but rather a cry of rebellion and of challenging establishments, taking flight and pushing forward despite opposing forces.

Influenced by ’70s rock, ’80s classic metal, and bands such as Black Sabbath, L7, Devil’s Blood, Neurosis, Candlemass, Messa, Mastodon, Electric Wizard, Uncle Acid and the Deadbeats, Yob and Danzig, Aptera‘s sound combines elements of classic metal, doom, stoner, sludge, thrash as well as punk in a unique way. Heavy and melodic, with unexpected tempo changes and transitions bringing the listener from stoner to punk, multi-layered guitars (Renata Helm and Michela Albizzati) and a propelling rhythmic section (Sara Neidorf on drums and Célia Paul on bass), vocals ranging from clean to furious shouts to a possessed and sinister witch’s incantation (Célia Paul and Michela Albizzati), each track weaves a tale that excavates myths and unearths something punchy and urgent.

Some of the lyrics have more of an introspective, personal nature, like Days of Void or Unbearable Stain, while others address social and political topics, such as the ill condition of women in our society, indirectly described through a legend in the song Selkies, as well as social injustice and oppressive systems of authority, as in When The Police Murder. The lyrics reframe timeless feminist struggles through various myths and deconstruct established ideals of women’s roles in contemporary society.

In the album cover a woman is emerging from her grave, pushing back against her own demise, rising in an act of burning protest, destruction and rebirth. You Can’t Bury What Still Burns pays homage to those who do not accept subjugation and gives life to the seeds of rebellion germinating within them, and to the daily actions, however small, which lead to disruptive changes in the dominant narrative. You can’t bury a fighting soul, a living dream, a burning heart.

Of course the fact that the album came into existence during the Covid pandemic had an impact on how it was shaped. Despite living in a climate of uncertainty, Aptera never stopped rehearsing and writing music during the pandemic. In the last two years, playing music together was the band’s mainstay — each member’s primary source of energy and inspiration to get through difficult times. Everyone of us went through an extremely wide range of life experiences and feelings: The loss of loved ones, loneliness, rage, recognizing limitations, disillusionment, deception by people we trusted, resilience, making peace with grief, and realising that we will always be there to support each other, through but also beyond our music. All of these elements have shaped and translated into Aptera’s sound.”