Mickey Leigh has been many things in this life: A guitarist, a songwriter, a roadie, an author, a cabbie, a bartender, even a drug dealer. But to some people, he will always be one thing and only one thing: Joey Ramone‘s little brother.

To some degree, that’s understandable. After all, their personal and professional stories are intricately intertwined. If fact, you could call Leigh the fifth Ramone. He was in a teenage band with Johnny and Tommy long before Joey came along. He sang backup on The Ramones’ first album. He was the band’s roadie for years. And he contributed to plenty of their songs over the course of their career. 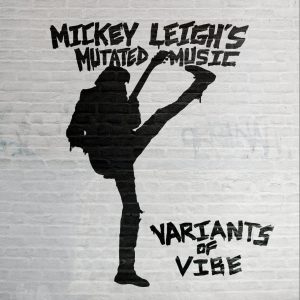 But along the way, Leigh has always done his own thing too. He started the group Birdland with notorious rock critic Lester Bangs, and made one great album before they disintegrated. He also made music with The Rattlers, Stop, Sibling Rivalry (with you-know-who) and other bands. In 2009, he published I Slept with Joey Ramone: A Family Memoir, which is now being made into a Netflix movie starring Pete Davidson. And this year, he finally released the first album with his name on the cover: Variants Of Vibe by Mickey Leigh’s Mutated Music. Does some of it sound like The Ramones? Sure. But it also sounds like The Stooges, The Who, ? And The Mysterians, The Monkees, The Dead Boys, Suicide, Johnny Thunders, Billy Idol, Jim Carroll, Tom Petty and Simon and Garfunkel. Basically, it’s a loving tribute to the sounds that Mickey and Joey grew up listening to, loving and learning from.

A few weeks before the album dropped, Mickey and I connected on Zoom to have a freewheeling chat about the record, the movie, his life and tons more. Watch that above, check out a slide show of some personal photos Mickey emailed me below, read my review of Variants of Vibe HERE, and get more Mickey Leigh at his website, Twitter, Instagram, Facebook, Spotify and YouTube.